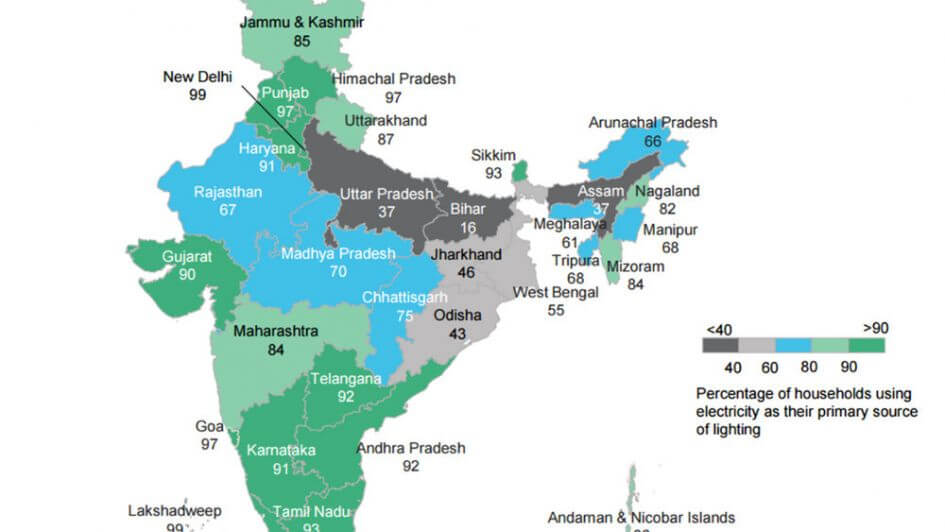 India has put forward a sweeping roadmap for its energy future, including the role it foresees for distributed renewables as it moves to create universal electricity access by 2022, and an energy revolution by 2040, by which time India’s population will be about 1.6 billion, with electricity demand expected to increase 4.5 fold from 2012 levels.

The draft National Energy Policy (NEP), issued by NITI Aayog, the government’s policy think-tank, said that 100% electrification is a “main plank” of the policy, acknowledging that “lack of access to electricity in homes marks a failure of the country’s energy policies and impacts education, health and economic development, especially in rural India.” The NEP counts India’s un-electrified as 304 million, while the Global Tracking Framework puts the number at 269.8 million. Whatever the number, the stakes are huge.

At the highest level, the NEP targets four objectives by 2040: access at affordable prices, improved security and independence, greater sustainability and economic growth. Principles for achieving those goals include a focus on market solutions largely free of subsidies, privatization of power distribution (transmission will remain state-owned), integrated governance in which state governments lead and the federal government complements, and a significant increase in R&D.

The policy reiterates the government’s “first endeavor to provide grid-based supply to all households”, yet it also makes clear that it sees the value in distributed solutions for rural areas, including micro-grids, even in places that are grid connected. “Electricity will be the major form of energy use, and the large off-grid renewables agenda will contribute significantly to its widespread availability,” the draft says. However, terms such as “short term” and “back-up” are still the dominant portrayal of distributed solutions within the draft policy, which says “it is generally agreed that the vast electricity demand of India cannot be met by decentralized solutions in a short time.”

Private sector companies and civil society organizations working on last mile electrification in rural India would disagree. Distributed solutions can be deployed quickly, provide reliable electricity for a set number of hours and flexibly meet the energy demand of rural consumers as demand increases. More importantly, they can be cost effective, easing the financial pressure on state-owned distribution companies (DISCOMs) while also playing a role in demand-side management.

The role of a vision document such as the NEP is to set a roadmap while being technology agnostic, and allow the implementing agencies to choose from a basket of possible solutions on what would be appropriate, given the regional context. As the focus shifts towards decentralized planning, wherein a greater role at the state level is envisaged (“in the future states would take greater responsibility in the management of power sector, with the centre playing a complementary role”, NEP says), the same focus needs to be accorded to decentralized energy solutions, with it being viewed as complementing the grid and not competing with it.

“Electrification” to be redefined, access fund to be created

On the bright side, the NEP calls for an update in the definition of “rural electrification”, with a village being deemed electrified “if and only if ALL households” have an electricity connection with reliable supply for a set number of hours (this is a big improvement on the current definition, which requires only 10% of households to be connected for a village to be deemed electrified). In the recent years, there has also been an increasing push to expand the horizon of electrification to include not just homes, but also community establishments such as village health facilities (see ‘Initiative on Solar for Healthcare’) or rural schools.

The NEP also suggests the setting up of an Energy Access Fund to address the urgent need to convert capital subsidies into operational incentives. India had set up the National Clean Energy and Environment Fund (NCEF)by charging a levy on coal, with the objective of utilizing it to fund research and innovation in clean energy technologies. The utilization of this fund has remained poor and before setting up another fund that might meet the same fate, it would be useful to divert the NCEF towards targeted objectives. While the NEP takes note of diverting kerosene subsidies towards alternatives, it needs to have a wider approach than only replacing kerosene use with solar lanterns. The choice of diverting the kerosene subsidy towards a better alternative (clean cooking or electricity) should be left to the households, a decision that would vary depending on rural or urban contexts, and consumption patterns. Further, the NEP states that rural consumers may be extended capital subsidy in the case of grid connectivity. Again, the allocation of such subsidies needs to be more strategic and stem from the fundamental principle of efficient and effective utilization of existing fund allocations.

A focus on micro-grids

In the context of decentralized renewable energy (DRE) solutions, the NEP considers micro-grids as both a primary solution for extremely remote villages, but also as a secondary, back-up solution where the grid is present, where they “may be in business until the supply quality aspect is resolved.” This serves as an ambiguous signal to the market as uncertainty continues around micro-grids vis-à-vis the grid. While the NEP makes a reference to the dovetailing of micro-grids to the main grid, it should focus on fast tracking the considerable efforts that have already been made with respect to the draft National Mini Grid Policy.

The draft NEP largely ignores the role of other DRE solutions such as solar home systems, solar-wind hybrid systems among others. The focus seems to tend towards any solution that can be grid connected. With the 40GW solar non-grid connected rooftop target yet to be met, it provides for a new market avenue for DRE entrepreneurs to operate in and continue their business in the clean energy domain. A large part of this target can be met through rural consumers, which NEP should recognize.

While greater focus is accorded to electricity services, access to clean cooking, which has been another significant focus area for the current Indian government (PM Ujjwala Yojana), also finds mention in the draft NEP. While LPG and probably a transition to induction-based cooking has been envisioned as the mainstay, improved cook-stoves will continue to play a key role in the shift towards clean cooking. Fuel stacking is still a reality among rural households, and more importantly, there are numerous smaller commercial establishments that could benefit from improved cook-stoves. There is a need for the NEP to focus on alternative cooking technologies, including biogas.

The NEP says the role of the private sector must be expanded to all investment areas, including rural electrification (“it is the last-mile connectivity for renewable electricity which faces funding challenges [and] the government will continue to provide financial budgetary support to the states”), but at the same time it is essential to provide the right market signals, and the NEP can go a long way in doing the same.

Last but not the least, the NEP could not be more timely and assume any more importance, given the risks of climate change and India’s commitment to tackling it, as espoused in its Paris commitments. At the same time, while India has made an ambitious commitment, domestic action would be key to ensure effective planning and implementation. NITI Aayog’s role and responsibility will only increase as the custodian of the NEP and serve as an anchor to bridge the gap between the state and the center. The NEP is a step forward and a critical point for India as it moves on the path of economic federalism.

See Also
Powering Health across Africa through COVID-19 and a Changing Climate Repurposing the COVID-19 Response for SDG 7 How community-based education campaigns can increase electricity connections and improve project economics Coronavirus is not the only global health crisis. Just ask ½ billion people 25 years on: has women’s action agenda impacted SDG7?