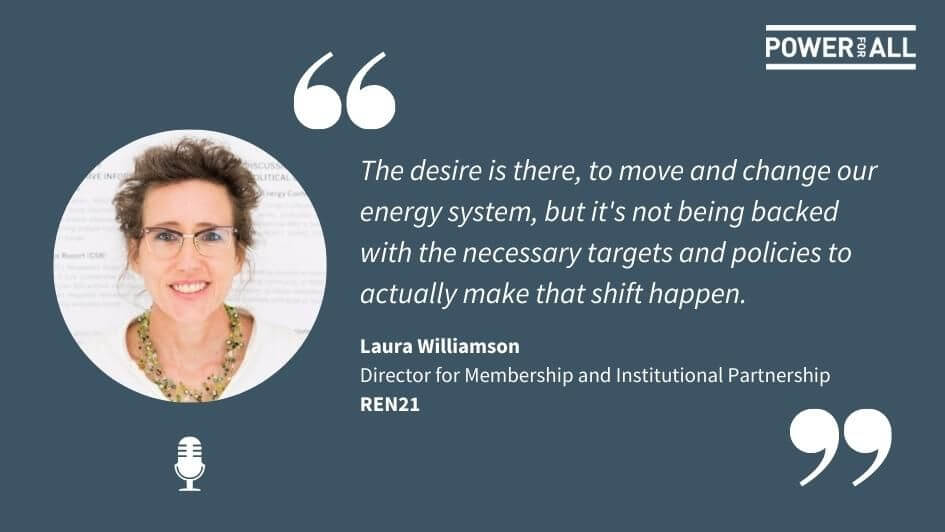 In this Power for All podcast, REN21’s Director for Membership and Institutional Partnership, Laura Williamson, talks about the findings of the Renewables 2022 Global Status Report that takes stock of renewable energy deployment around the globe. She says the report has put in the spotlight the gap between ambition and action on just energy transition.

Laura said that while there was the desire and ambition to change energy systems, it needed to be backed by timelines and policies to deliver the much-anticipated transition and address energy poverty.

She said the mission toward transition had further been compromised by Russia's invasion of Ukraine, which had seen energy prices increase drastically. As a result, many countries have returned to fossil fuels,  burning even more coal, oil, and natural gas, to deal with the global energy crisis.

She pointed out this irony because while renewable energy was a cost-effective way to generate energy, it was still not considered an option by many countries during the crisis. They had defaulted back to what they knew rather than what is the best thing to do.

Laura said the 300-page report was crowd-sourced knowledge with at least 600 people contributing to it.

Listen to the podcast for more findings on the state of the use of clean energy around the world.