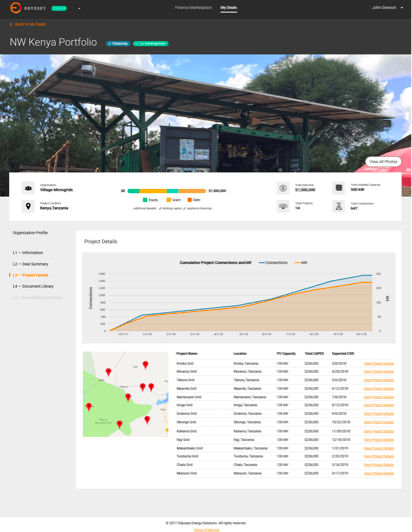 “New investors are interested in mini-grids, but they look at companies and say ‘They are not ready for us’,” says Katrina Pielli, senior energy advisor for the U.S. Agency for International Development (USAID).  “It’s exhausting for investors to go through 16-tab spreadsheets with no two developers presenting things the same way.”

This barrier is about to be dismantled thanks to a number of simultaneous efforts aimed at standardizing and aggregating project portfolios, and priming the pump for larger commercial investment.

The underlying project economics of mini-grids have so far been all over the map, with a wide range of costs, revenue models and business models. Prospective investors have two major concerns: believability of load demand projections and revenue assumptions. “For the first 5 years of this sector, almost every project was over-sized,” Zoi says. Odyssey addresses the problem, by using bottom-up data and analysis that is tailored for regions with low energy access and income levels that are challenged. The National Renewable Energy Lab (NREL) is currently working on improving demand data for household appliances, which will be integrated into the platform and further improve the ability to project consumption patterns.

As the platform gets more meter data from projects, it will be able to validate the load and revenue forecasts, which will get better and better over time, reinforcing the trust-worthiness of mini-grid economics.

On Odyssey, matchmaking happens between developers and “different colors of money” (debt, equity, concessional financiers get pinged when a deal that’s gone through a pre-diligence process is live), and between developers and vendors (where component manufacturers can have confidence they are selling to reliable, credit-worthy developers, and vice versa). “There are no common set of widely known prices for components,” Pielli says, adding that the new platform helps address that.

“We're getting such a great response from developers and financiers. This platform will make things a lot easier to scale the sector,” Zoi told Power for All, adding that Odyssey expects to have about a dozen deals financed by the end of 2018. The company is planning for 400 projects to go through its platform through the end of 2019. Free for now, eventually Odyssey will collect a commission from developers for lead generation and charge a subscription from investors.

As Odyssey's platform launches, it will dovetail nicely into efforts to scale access to finance and move the sector to critical mass -- from dozens of projects a year in 2017, to 100s in 2018 (in Madagascar alone, the US Trade and Development Agency just this month backed a program to build 100 mini-grids). At the same time, major utilities like Engie, E.ON, Enel, EDF and multinationals such as Caterpillar and Mitsui are starting to ramp up their mini-grid investments, which will no doubt help to attract more commercial finance on the back of their strong balance sheets.

But for now, most of the money is still concessionary capital, and the Microgrid Investment Accelerator (MIA) was launched earlier this year to change that. Fresh from a DFID-hosted meeting of donors this month to coordinate their support of mini-grids, MIA CEO Alexia Kelly is "incredibly bullish" about the mini-grid opportunity.

"The cost curve is going in the right direction. Innovation is happening, including integration with productive power," Kelly tells Power for All. "Microgrids have the ability to drive comprehensive self-generated economic development in communities."

But she's also very clear on the challenges. "It's important to realize how early this sector is and how much heterogeneity there is," Kelly says, citing top challenges as poor data, lack of aggregation and standardization and of course, lack of capital. But she also stresses MIA's desire to be a market-making intermediary not just for capital, but the entire investment ecosystem, including policy.

MIA is an "investment vehicle that meets the market where it is today, but can also evolve. It's a revolving vehicle that is a hydrid profit, non-profit, with concessionary loans to begin with, then moving into commercial lending as the economics improve."

It plans to leverage a $12.5 million grant to mobilize $115 million with the goal of connecting more than 1 million people by 2036, although most of them get power in the early stages because MIA is pushing most of its capital out by 2023. The average project size is about 25 kW, with an average ticket size of $150,000. In terms of most commercially viable markets, Kelly says India is the lowest cost, followed by East Africa and then Indonesia, and it has already developed a qualified pipeline from about 40 developers from those 3 regions.