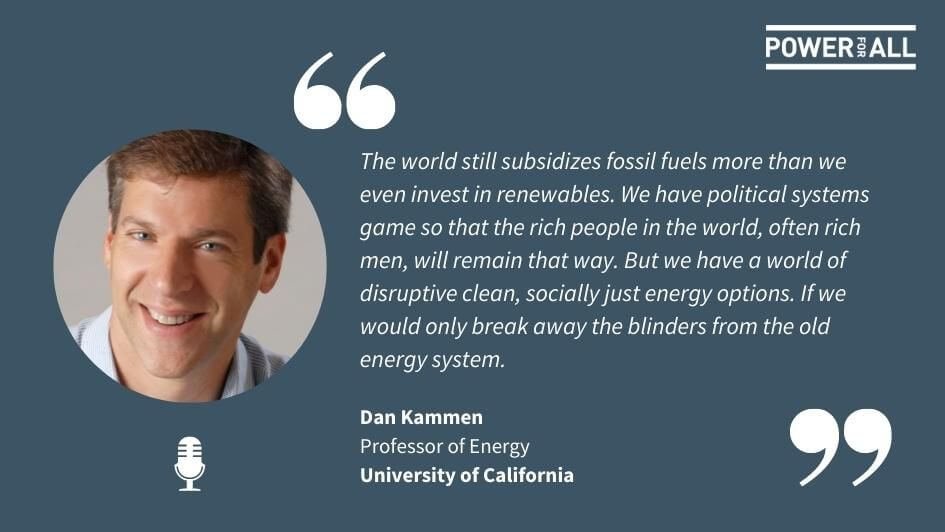 Power for All · Paygo, a Disruptive Tool for Just Energy Transitions: Interview with Prof Dan Kammen

In this episode of the Power for All podcast, Kristina Skierka, Founder and CEO of Power for All, speaks with Prof Dan Kammen, a Professor of Energy at the University of California, Berkeley, with parallel appointments in the Energy and Resources Group.

The conversation focuses on how the renewable energy sector has changed over the years and the role of innovations in driving energy access in peri-urban and rural communities, particularly the Pay-As-You-Go (PayGO) model.

Dan notes solar energy is now cheaper than fossil fuels. He attributes that partly to scaling up and manufacturing but mostly to figuring out how to work a system that, for a long time and maybe even today, is not bending over backward to accommodate clean energy.

“Human connections, thinking about energy access, energy justice, and asking the gender and racial questions of inequality were never on the table as they are now,” he adds.

He notes there are still problems in a world that still subsidizes fossil fuels more than investing in renewables but we also have a world of disruptive clean, socially just energy options.

Dan notes PayGo is a democratic system that allows the consumers to see what energy costs and to pay for it, as they wish, in small units. He, however, cautions against opportunists who may take advantage of the system.