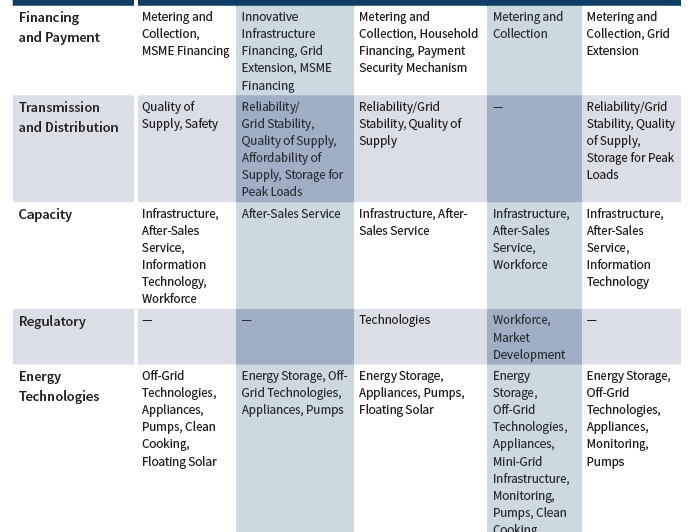 4 insights on what’s next for India rural electrification

In 2019, India announced the completion of the Saubhagya Initiative, its program to provide electricity connections to every village and every home in the country. However, even though millions more are now connected, problems remain (and new ones have emerged), including unreliable supply of power, a lack of workforce capacity for utilities (DISCOMs) to serve an expanded customer base and additional stress of fiscal health. While India’s central government sets national policy, India’s states have concurrent jurisdiction over the power sector and are responsible for implementation of central government programs and policies. For foreign stakeholders interested in supporting India’s electrification agenda, this presents an opportunity for them to engage with states to help meet their energy access priorities.

To identify key areas for international engagement, Washington, D.C. based Center for Strategic & International Studies (CSIS) conducted a survey of government, civil society groups, and energy access practitioners in the Indian states of Assam, Chhattisgarh, Madhya Pradesh, Odisha, and Rajasthan on their energy access priorities. The findings were released in a report last month titled Engaging with India’s Electrification Agenda.  CSIS scholars structured their surveys such that priority areas were categorized in the following areas:  financing and payment; transmission and distribution; capacity; regulatory; and energy technologies (see Figure 1).

Key themes from their research include:

1. A need to bolster DISCOM capacity at large to deal with an expanded service area. This includes workforce capacity as well as technological capacity to remotely monitor infrastructure health and maintain high levels of billing efficiency.

2. Improving the quality and reliability of power is the focus of states moving forward. Additionally, as India attempts to integrate vast amounts of new renewable energy into the grid, finding creative ways to infuse this variable energy source closer to consumers at the 33/11 kV (kilovolt) substation-level might help address some of the voltage fluctuation concerns while helping to meet renewable energy purchase obligations of states.

3. The next order of business for DISCOMs is to stimulate electricity demand amongst their customers in these newly expanded service areas. This means stimulating economic activity or having consumers use electric appliances that would help generate demand and thereby recuperate the costs of the infrastructure outlay.

4. There is still a need for off-grid energy technologies and supporting direct current (DC) appliances for rural areas (particularly those areas where the Saubhagya initiative used these technologies to supply “connections”). However, these will continue to need better monitoring, servicing and rigorous quality control to ensure that customers investments and experience with these technologies is not short-lived.

In the post Saubhagya Initiative world, energy access practitioners, philanthropies, development finance institutions and scholars must be a part of the shifting landscape and find ways to plug into the new reality. While connections have been made to millions of new customers which is a laudable feat, these connections risk being lost unless the ecosystem to keep the connections alive is strengthened. Segmented by the categories in which the surveys were conducted, the report gives examples of opportunities to collaborate through new projects and partnerships to bolster state capacity and to support emerging ideas by several energy access practitioners.