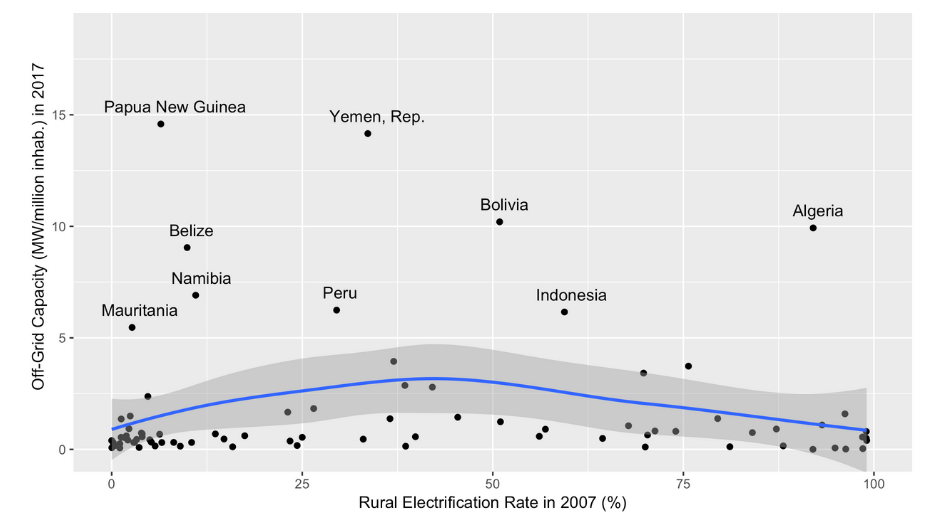 Michaël Aklin, Assistant Professor at University of Pittsburgh and Director of Energy Access Research at ISEP

As demonstrated in by new data from IRENA, off-grid renewable electricity has grown tremendously across the world over the last decade, but growth was very uneven. Why was off-grid successful in some places and not others?

Two hypotheses are natural starting points. First, off-grid should be attractive where there is strong demand for electricity. If off-grid electricity responds to energy poverty, then we should expect countries with lower electrification rates to be fertile grounds for these technologies.

Figure 1 suggests that demand is not the whole story. The relation between electrification rates (10 years ago) and off-grid deployment (today) is, for the most part, nonexistent. To be certain, some of the most energy-poor countries, such as Belize and Papua New Guinea are among the leaders in off-grid deployment. But beyond this, there seems to be no discernable pattern linking electricity poverty to off-grid capacity. The latter did not grow where access to electricity was the weakest. 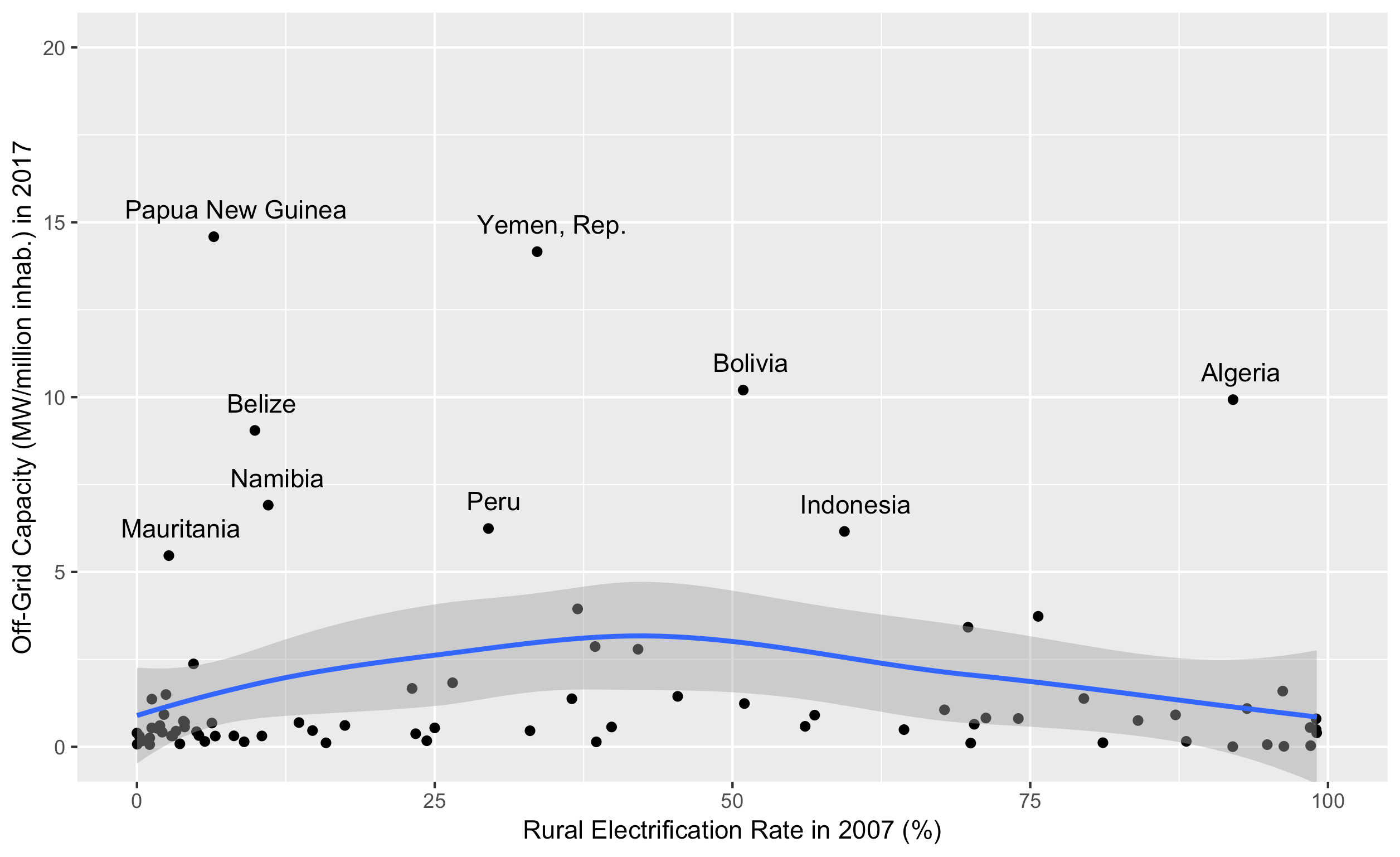 An obvious second explanation could be wealth. Demand might be strong in countries with scarce electricity, but these tend to be also very poor and perhaps cannot afford new technologies. Thus, perhaps wealthier countries could be first adopters of decentralized systems.

Figure 2 below compares of-grid deployment to GDP per capita. What is striking is that off-grid seems to be most successful among middle-income countries. And this makes sense. Very wealthy countries generally have less of a need for off-grid power. Very poor countries cannot afford it. It is countries in the middle-range that both need and can invest in off-grid deployment. 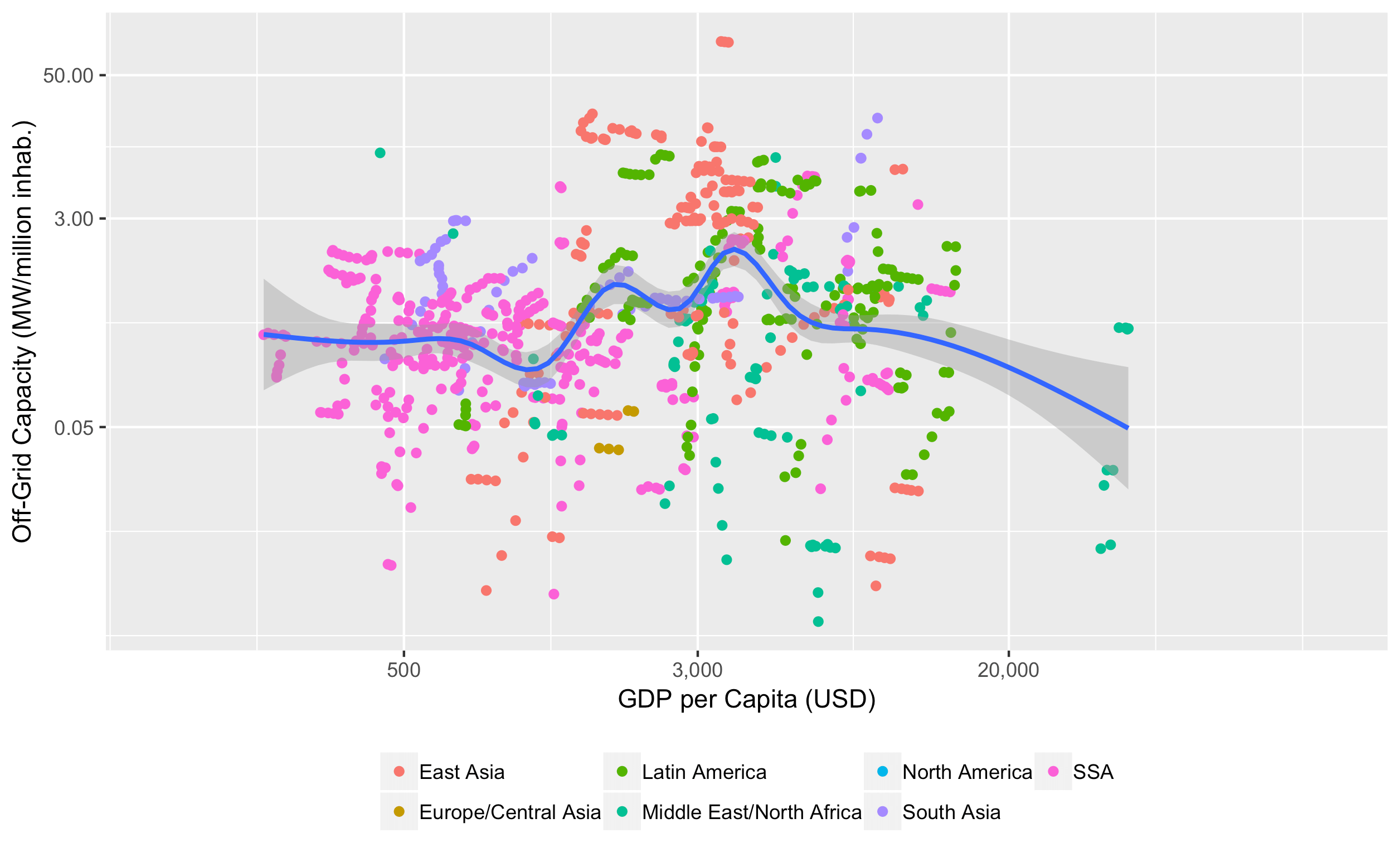 These findings only start to scratch the surface of the problem, but they raise an important question: how can off-grid technology be deployed faster? International donors have limited resources. Knowing where conditions are the most ideal — or, conversely, where most public support is needed — is crucial to design good policies. Likewise, the renewable energy industry’s viability depends on finding good markets. Ultimately, off-grid technology is not deployed in a vacuum. Successful cases will be emulated elsewhere. These new data will help us to understand the conditions under which off-grid power will flourish.