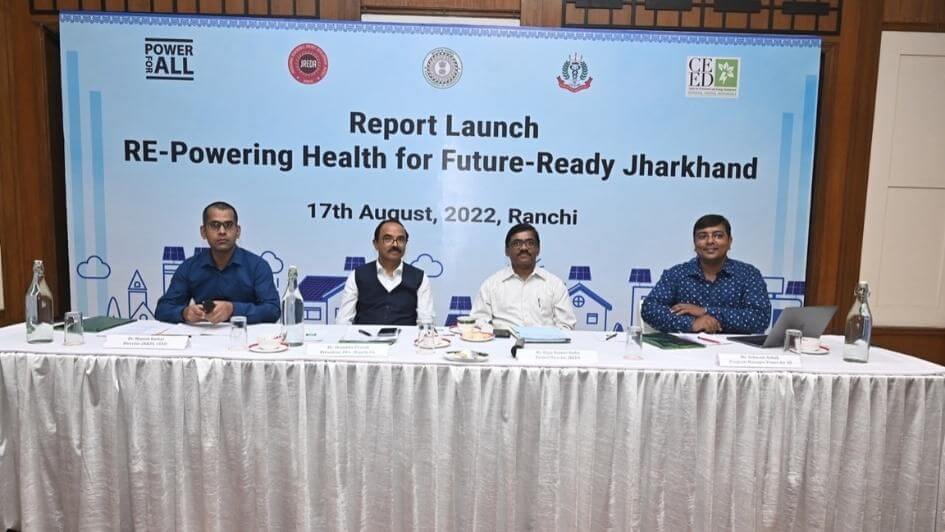 A Roadmap on Solarisation of Health Sector That Can Save $70 Million to the State Exchequer, Launched

Power for All, JREDA, CEED

Ranchi, 17 Aug, 2022: A roadmap ‘RE-Powering Health sector for Future-Ready Jharkhand’ jointly prepared by Jharkhand Renewable Energy Development Agency (JREDA), Centre for Environment and Energy Development (CEED) and Power for All was released in a state level conference today. The report posits a visionary policy approach for the next ten years in the health sector and clearly demarcates the pathbreaking role of renewable energy in ensuring energy access for enhancing the efficacy of the health services. The report meticulously maps out the infusion and projections of Decentralized Renewable Energy (DRE) in the entire health infrastructure in the state.

During the  conference, policy level discussions were held to address the prevailing issues, systematic gaps, and define priorities with the lens of energy access and promote the idea of health and energy integration in the post-COVID phase in the state.

Lauding the initiative of preparing the much needed roadmap, Mr KK Verma, Director, JREDA, noted that the DRE enabled solutions can play a vital role in  strengthening the health sector as they are well suited for diverse terrain and hamlets of sparsely located habitats in Jharkhand.

“As a State Nodal Agency, JREDA is committed to promote infusion of renewable energy in healthcare centers and it has, in collaboration with the Health Department, installed over 423 Solar Photovoltaic (PV) systems across the state with a cumulative capacity of about 7 MWp. JREDA will take the lead in facilitating tech know-how, capacity building and training support to a range of stakeholders in this process,” he said

The roadmap-report projects that power demand in the health sector is expected to reach 175 MW in the next ten years, out of which DRE has a scope of around 40 MW. It further notes that in the ‘Business as Usual’ scenario, the DRE can help the state exchequer save 227 crores with a mere investment of 124 crore, while in ‘Optimistic’ scenario it can help save $70 million) with an investment of $250 million. The DRE can bring environmental co-benefits by saving nearly 0.8 million tonnes of CO2 in Jharkhand which is equivalent to carbon stored by 11,339,214 tree seedlings over a period of ten years.

Elaborating the intent behind this initiative, Mr Ramapati Kumar, CEO of CEED said this roadmap brings a compelling argument in favor of solarisation of the health sector. A statewide program ‘Solarization of Health' should be initiated to install renewable energy systems in all government-owned public healthcare centers.

“This program should work in a convergence mode involving aligned agencies on creation of enabling frameworks and financing ecosystems with encouraging technological solutions in array of health services. This will lead towards transforming the healthcare infrastructure and help in accessing health services to the people in dire need,” he said.

Speaking during the occasion, Mr Ashwani Ashok, Program Manager at Power for All noted  that, since a large number of health centers do not meet the criteria and guidelines of Indian Public Health Standard (IPHS), Jharkhand urgently needs to bring in an ecosystem that takes a holistic approach.

“Solarising health centers can be a financial boon for health centers with a low payback period of 6-7 years thereby providing support against rising fuel and electricity prices. In such a scenario, this report chalks out a visionary path for strengthening the health infrastructure through sustainable means,” he added.

Praising the transformative role of DRE applications in healthcare sector, Dr Shambhu Prasad Singh, President, Ranchi Chapter of Indian Medical Association (IMA) and Director, Kanke General Hospital noted DRE solutions can provide rural hospitals  with an array of services during general as well as medical emergencies such as solar-based cold storage, vaccine refrigerator, baby warmer and portable health care kits, etc. He  urged the State government, IMA fraternity and private hospital administrators to increasingly use the DRE applications in their premises which will enhance the services and also improve health indicators of the state.

The conference also deliberated on the way forward of energy transition in health sector through a technical session which was participated by Mr Mukesh Prasad (JREDA), Mr Debnath Bera (Ranchi Partners Management Consultants), Mr Vijay Shankar (ClimateX) and Mr Ashok Kumar (TRIF).. The session agreed that there must be a robust policy mechanism for health and energy integration with overcoming investment gaps, capacity building, and technology integration which will play a major role in defining success in health infrastructure.

The conference was attended by key representatives of government departments such as energy, health, rural development, along with Indian Medical Association, renewable energy developers, health institutions, civil society organizations and other key stakeholders from the state.