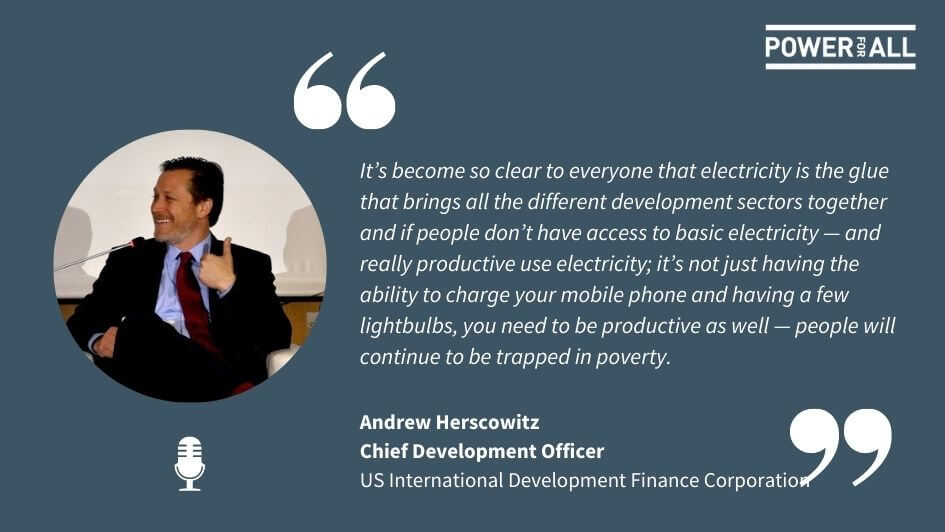 Power for All · Roadmap for Impact: Interview with Andrew Herskowitz

In this episode of the Power for All podcast, William Brent speaks with Andrew Herscowitz, Chief Development Officer at the US International Development Finance Corporation (DFC), who has been deeply engaged on development issues for more than two decades. Before joining DFC, he was the coordinator of the Power Africa program where he oversaw the addition of 60 million new electricity connections across the continent.  Here’s a summary of the conversation:

Electrifying communities in Asia, Africa, and Latin America is still a strategic priority for the United States government

Universal electricity access has been a priority for the Obama administration, the Trump administration, and this continues with the present administration. In recent months, DFC has pledged up to US$ 2 billion for distributed renewable energy after The Rockefeller Foundation earmarked as much as 50 million to de-risk DFC investments; and another recent DFC deal with the Shell Foundation to electrify 5 million low income households in Africa and Asia by 2025 all point to this commitment.

For obvious reasons, electricity is something that is critical to helping people achieve all other development objectives, whether it’s health or education, or simply economic growth. That has become increasingly apparent across the board during the COVID-19 pandemic -- for people who had to work remotely, for people getting hospitalized and needing respirators, and now for ensuring vaccines can be transported and stored at the right temperature. It’s become clear that electricity is really the glue that brings all the different development sectors together. And if people don’t have access to basic electricity, and productive use of electricity, they will continue to be trapped in poverty that leads to unrest, and leads to migration. So this is a critical issue for countries, both locally as well as internationally because of the impact that electricity has on development.

DFC’s development strategy, the Roadmap for Impact, looks at everything from a COVID-19 lens in an interrelated way. Looking at the key sectors that are most impacted, both in terms of addressing COVID-19 but also in terms of mitigating future pandemics. And these are the same sectors that are impacted by climate change as well. In partnership with The Rockefeller Foundation and Shell Foundation, DFC is calling for applications to identify opportunities to finance distributed renewable energy, whether that’s minigrids or microgrids. This is going to be a challenge and will not be easy. It’s an ambitious goal to achieve universal electrification by 2030 especially since the minigrid and microgrid market being where it currently is, is struggling to demonstrate commercial viability. But this partnership wants to give the sector the push it needs, and de-risk some of these projects so that we can demonstrate that these business models can be commercially viable that can be scaled. In order to see if the distributed renewable energy model is truly viable, we need to be all in.

As an agency, DFC deploys anywhere between US$ 5-8 billion dollars a year across sectors. But as a bank, and not a grant agency, the corporation has to ensure that the projects financed were commercially sustainable. So using blended financing tools like The Rockefeller Foundation money and the Shell Foundation money, we can try to nudge the market to demonstrate that projects can be commercially viable. It’s a challenging model that DFC hopes to support and test.

Power Africa ran a grant program to test the business model for these types of distributed renewable energy projects in refugee settlements and camps in Kenya and Uganda. A part of the idea was to see in a more controlled environment where there’s some level of steady income, whether we were able to demonstrate commercial viability, and whether business models could be tweaked to become more efficient. We’re all working together to see what works and what doesn’t.

If we start to see scalable models, there will eventually be more financing for the sector. It comes down to whether or not they’re bankable projects. Which is why working with philanthropy and development organizations, the US government wants to see how we can provide as much technical support and financial support to help build this industry.

The absorption capacity for larger funding isn’t there right now because there aren’t enough bankable commercially viable projects. Financing needs to be at scale, so it’s not about funding 2-3 microgrids, but scaling that up to 100 or 1000, which would allow the cost of production of equipment to come down. With greater scale comes greater efficiency and you’re able to create a mini utility, which will bring down prices.

Power Africa’s Beyond the Grid program has a lot of technical advisors who have been watching the space closely because it’s a nascent industry. There are companies who have never gotten financing before, so it may be that they need help preparing a business plan to make sure they present as good potential clients. There’s also a need to educate the financial sector on how to evaluate companies coming to them for projects because you would evaluate them differently from how you would a solar home system company. There are two types of companies in the market today, ones that were set up early on, most likely by foreign nationals working in Africa or Asia; and then others set up more recently by local entrepreneurs. Both these types need financing and that has been a big barrier identified by a number of key actors in the market. One of the things DFC does is provide local currency financing, which is an expensive tool for the corporation. If you’re financing something over a 20 year period, and you can predict that local currency will devalue significantly against the US dollar, DFC is taking a significant financial risk. But at the end of the day, DFC is a public development finance institution, and the goal is development without saddling the end user, the beneficiary with additional costs.

DFC has been conducting town halls, virtually, with embassies across Africa to identify 50-100 local companies in order to educate them about DFC’s tools and how to do business with them, with a strong commitment to sustainable development. Part of DFC’s mandate is to ensure the businesses have some nexus area with development, and so the client base is diversified to meet that mandate. There’s an increasing question mark around whether connections is the best metric for tracking progress on energy access, and while it continues to be the primary metric, basing progress on service levels instead is gaining traction. We obviously need both. There’s tremendous value in a person getting access to an electric lantern when they’ve been using kerosene their whole lives. That’s a good first step. But ultimately, what we should be working towards is productive use of electricity, and a much higher level of that.

Another thing people don’t often think about is the aspect of heating and cooling. We think about energy access as basic electricity, being able to have lights, watch television, charge mobile phones. But we forget that cooking is so energy intensive and there are billions who continue to cook with biomass and charcoal, and we need to get these people to use more modern cooking methods. This is a critical issue to tackle if we are to meet our climate goals.

See Also
Interview with Todd Moss: Increasing Energy Access Ambition for Global Development Investing in Scale: The opportunity at the nexus of food and energy Going Beyond Solar: A Holistic Approach to Powering Rural Healthcare Podcast: Women at the frontlines of energy access Podcast: Youth and Clean Energy Jobs