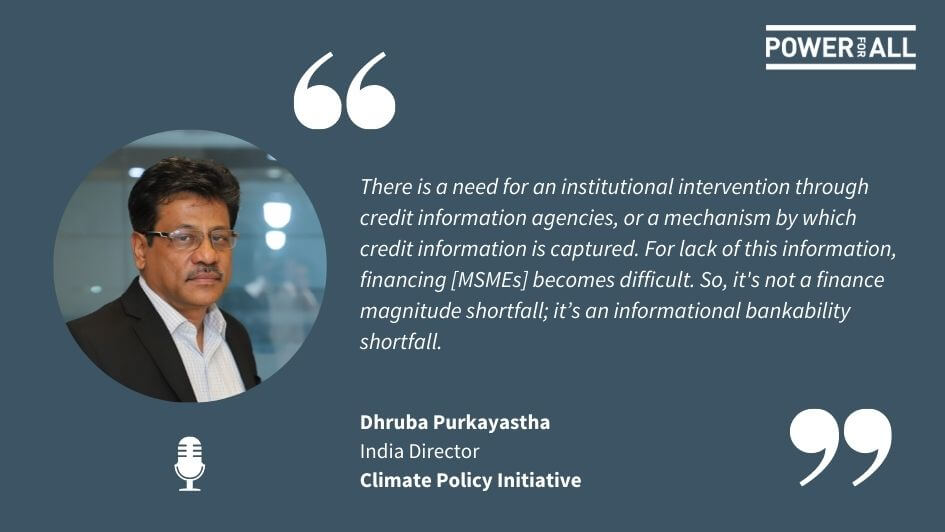 Interview with Dhruba Purkayastha: The Future of Distributed Renewable Energy in India

Power for All · The Future of Distributed Renewable Energy in India: Interview with Dhruba Purkayastha

In this episode of the Power for All podcast, Divya Kottadiel speaks with Dhurba Purkayastha, who leads the team at CPI in developing innovative finance and policy solutions in support of the government's renewable energy and green growth plans. He is also the director of US India Clean Energy Finance. The conversation centres around CPI’s recent report on the  future of distributed renewable energy in India, which outlines the benefits and market potential of India's DRE sector, examines the current policy and institutional landscape and provides tailored recommendations for various stakeholders.

Although India has ambitious renewable energy targets, and significant progress has been made, a large part of this progress has been grid-connected while distributed renewable energy capacity growth has stagnated. The current power generated through DRE in India is around 6-7 GW. This needs to be scaled up, given the sector’s large potential, especially distributed solar.

But regulation in the decentralized renewable energy sector over the years has not been very conducive to growth. The possibility of net metering generation at the consumption level, and that being netted off with electricity consumed at the grid are gradually declining. Therefore, the need arises that along with grid-connected renewable energy, DRE must also be allowed to flourish on the consumption side. DRE generation must be at a level close to consumption, so that both technical and commercial losses are reduced. These smaller projects of DRE, including decentralised hydro projects must develop for a balanced energy transition in India.

In order to raise finance for DRE, it is important to first create viable economic activity that can generate income and profits for everyone involved. If economic activity is constrained, then finance is automatically constrained as well. For instance, the application of DRE is possible in various ways-charging stations, e-mobility vehicles, solar pumps, and rural productive applications. When DRE can power these activities, and a significant amount of power consumption can come from DRE, a demand is created through these applications. Financing these activities through MSME and entrepreneurship models by involving private players is highly profitable since MSMEs consume power at INR 10-12 per kilowatt hour, and DREs could bring down the cost to 5-6 INR per kilowatt hour. This could create the right business model if there are enabling regulations.

The challenges in receiving funding for these projects is that usually, the projects are too small and financial institutions incur higher costs for funding these MSMEs for the first time. Secondly, there is a lack of credit information on these MSMEs when compared to larger corporations. There is no attempt on part of regulators to improve credit information on these DRE-based enterprises. Most often, DREs power institutions like schools, temples, marriage halls and even cold storage facilities which have a huge dearth of information. Thirdly, lending in India needs to be debt-based business, which means it requires collateralization of assets. This is not always possible with solar-based assets. Finally, credit enhancement and credit guarantees on the regulator’s part could also improve the financing situation for DRE powered MSMEs.

The broader policy based problems of financing DRE are linked with the lack of viable business models as well as utility distributors being unable to purchase renewable energy, because the high differential in centralised grids cross-subsidise someone else.  The financial constraint does not come from lack of money but from inadequate credit infrastructure.

The reverse migration of workers due to the Covid-19 pandemic requires a stronger rural economy to support this influx of people back to villages. Rural non-farm economies such as processing, packing, chafing, milling, along with stitching and tailoring; has to be scaled up to unload the excess burden that will now further strain the farm economy, in order to support the livelihoods of millions. Powering these activities with clean energy sources would spur growth and create many jobs.

Public intervention through some government scheme in providing incubation and technological support to the rural areas could go a long way in making the transition to renewables smoother.

Additionally, the regulators need to price electricity at the cost of service at that point and not adopt an average pricing method, which does not allow smaller businesses to remain viable. There needs to be a change in approach of setting regulatory tariffs for distributed renewable energy. The government should also refrain from intervening through regulation of technology and let the markets take over, instead of placing price caps on technology and its usage.