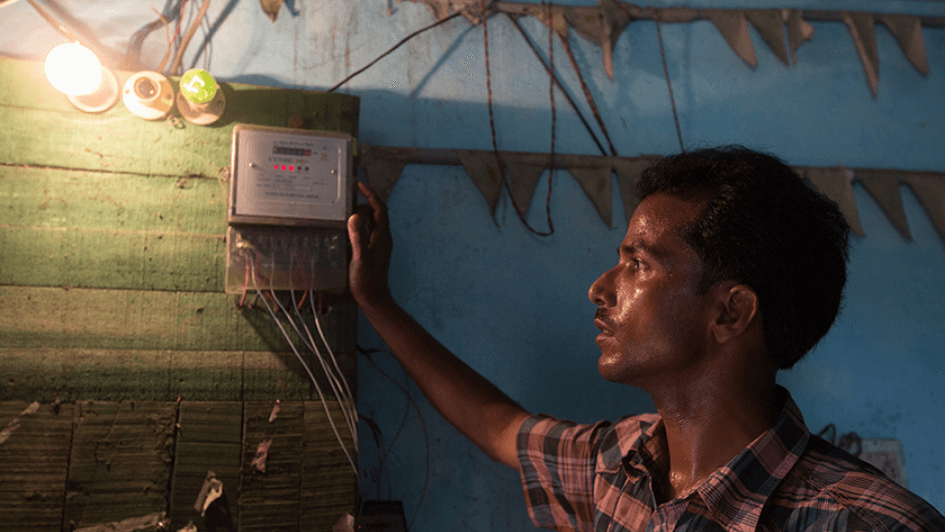 Going beyond the grid: The future of distributed energy in India

India is the world’s third largest carbon emitter, with emissions expected to rise as the economy grows. While this economic growth is important for advancing development objectives, especially in the wake of recessions due to COVID-19, it also poses a challenge: Around 600 million people in India are at risk from climate change fallouts such as ﬂoods, wildﬁres, and heat waves.  Additionally, inaction on this threat could shave USD 1.12 trillion off the country’s GDP by 2050,  eroding progress on sustainable development and poverty alleviation in a country that already struggles with meeting basic needs.

Energy access is a priority in India. While the country has achieved close to  100% village-level electriﬁcation and house-hold connectivity via Saubhagya, signiﬁcant challenges remain including lack of reliable electricity supply, unscheduled power cuts, and low voltages. Access to reliable and good quality power supply remains a challenge for both households as well as commercial and industrial customers outside urban areas, leading to lack of economic growth in rural areas.

A major opportunity for addressing both economic and environmental goals lies with clean energy, which is commercially feasible in India at the large-scale, grid-connected level. In addition to clean energy’s climate beneﬁts, some forms of clean energy, particularly distributed renewable energy (DRE), also facilitate enhanced energy access, further driving the economy. Clean energy deployment also creates a large number of jobs that India needs for its emerging workforce, making it a win-win-win on India’s path to sustainable development.

Recognizing these various needs and challenges, India has rightly targeted its energy sector for transformation, with an ambitious renewable energy target of 175 GW by 2022. Solar energy comprises 100 GW of this target, of which the government aims 40 GW to be rooftop solar (including small-scale, grid-connected solar projects).

To date, the government’s primary focus of renewable energy expansion has been on large grid-scale solar. However, achieving India’s ambitious renewable energy targets will also require an increase in off-grid renewable energy projects. Among other reasons, such projects, though smaller in size, have greater scalability potential and also avoid the long lead times and execution bottlenecks associated with public-sector offtake procurement projects.

However, despite the evident potential of decentralized or off-grid renewables in solving many of India’s environmental and economic challenges, the clean energy sector has not seen appropriate growth in the last few years. The total installed solar rooftop capacity increased from 0.5 GW in 2016 to 3.4 GW by 2018 but has only increased to 5.3 GW since then.

A recent CPI report, which outlines the benefits and market potential of India’s off-grid clean energy sector found that India will require annual DRE investment of USD 18 billion by 2024, a 10x increase from current levels to meet its sustainable energy targets.

Challenges to expanding off-grid renewables or DRE in India include unclear policy direction, such as on net-metering and import duties on solar modules, as well as information asymmetry among equity/debt investors constraining companies’ ability to access ﬁnance. While rooftop solar remains the mainstay, emergence of diverse business models such as irrigation, water supply, distributed storage, cold chains, and charging infrastructure have expanded the gamut of clean energy applications. Supporting these businesses with both technical assistance and development (and commercial) ﬁnance is crucial to realize India’s off-grid renewable energy potential.

A stable policy environment with incentives for all stakeholders is required to accelerate growth and would help direct more public and private financing, from domestic and international sources, into the DRE sector. The report also examines the current policy and institutional landscape of the clean energy sector and provides tailored recommendations for different stakeholders.

Given the massive unrealized scale and scope of renewable energy in India, and serious constraints on access to ﬁnance, it is imperative that the DRE sector receives further government and institutional support. Government policy going forward should foster private market growth while providing a meaningful role for DISCOMs so that they stay relevant and do not feel the threat of disintermediation.

Distributed renewables and its downstream applications offer an opportunity to not only meet India’s climate and energy access targets, but also provide attractive returns to financial investors. It also provides pathways for India to reduce import-dependence on crude oil as well as create economic growth and jobs in the long run. In addition, addressing existing policy and financing gaps would not only allow for better targeting and risk-hedging of government spending programs, but would also allow capital to be recycled efficiently, thereby enhancing both the duration and magnitude of the impact.

See Also
Revolutionizing Decentralized Renewable Energy (DRE) through Blockchain Clean energy transition through integrated energy, what will it take? Powering through the pandemic Meet the Unsung Heroes: Women at the forefront of scaling energy access Power for All’s 2021 top trends for energy access