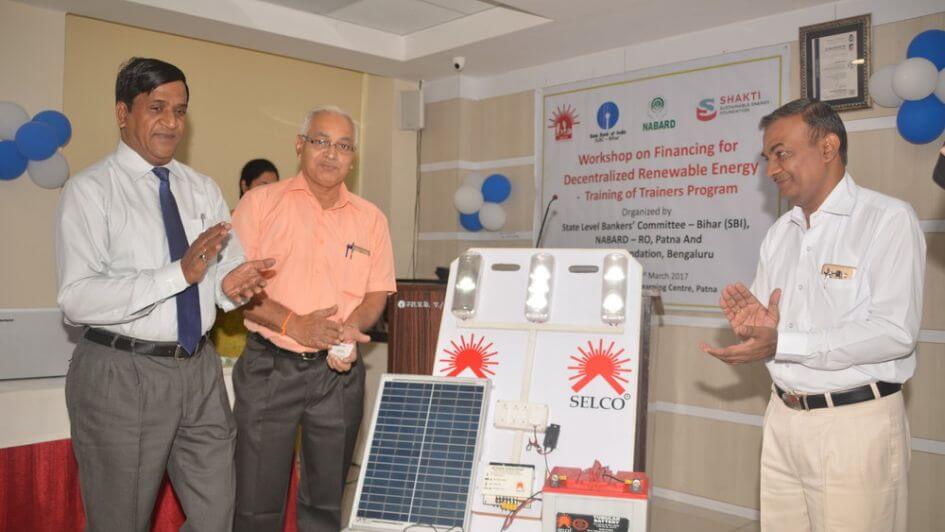 The biggest frustration voiced by enterprises looking to deliver last-mile electricity connections to the rural poor is lack of finance. To solve this major roadblock to scale, SELCO Foundation has developed an innovative program that has nothing to do with money. It focuses instead on people and process. Sound boring? Not at all, and it may be a key to fully unlocking the distributed energy transition sweeping the world.

Since 2011, SELCO Foundation built on previous efforts of the energy enterprise SELCO India to sensitize bankers to distributed renewable energy (DRE), focusing on building capacity within the Indian banking sector, especially at the village level, in order to create more end-user and enterprise lending. SELCO India had conducted over 1,000 banker training programs since the late 1990s in order to stimulate access to credit for the poor to purchase household clean energy systems. These efforts led to partnerships with over 30 financial institutions, of which many were first-time lenders for clean energy systems.

However, with 44,000 bank branches in India, each with 10 employees, it was clear that this initiative had to be able to scale and be replicable. Thus SELCO Foundation, which was set up in 2010 to develop the conditions needed to scale energy access for the poor, tweaked the existing program to build institutional knowledge by tapping into existing capacity-building programs within banks, and train the trainers already employed by the banks themselves

SELCO Foundation, in partnership with Shakti Foundation and Bharitya Vikas Trust (BVT), is already engaging in seven regions — Bihar, Assam (North East India), Odisha, Karnataka, Maharashtra, Uttar Pradesh and Delhi. It has conducted 6 trainings so far, with 25 bankers in each class. SELCO is already getting positive feedback from banks, according to SELCO Foundation Program Manager Swathi Murali. “Bankers are calling us to find out next steps on how to take it forward,” she told Power for All. Ultimately, SELCO Foundation wants to activate the trainings in market by developing financial programs with the banks that turn knowledge into practice. Based on these trainings, banks in Odisha, Karnataka, Bihar and Northeast India are already initiating or strengthening their clean energy financing portfolios.

Banks like State Bank of India (SBI) have introduced a clean energy financing component into their internal training programs. Moreover, since the beginning of this year, Syndicate Bank, Odisha Gramya Bank, Narmada Jabua Gramin Bank and Bihar Gramin Bank have undertaken innovative financing activities in Madhya Pradesh, Odisha and Bihar for solar home solutions and livelihoods, while banks in the north-eastern states and Odisha are in the process of developing circulars and schemes in an effort to establish renewable energy as an important portfolio for bank financing in rural areas.

“The end goal is not to do training programs, but to use training to convert into loans. Training is just the first step to get there,” Murali said. “Our goal is to make the process institutionalized.”

Training only has the desired impact, however, if a comprehensive support network for the banks is available on the ground. In order to ensure that happens, SELCO Foundation is also working to build partnerships with local entrepreneurs, NGOs and policy makers to develop an ecosystem on the demand and supply side that can not only issue, but absorb loans. This means helping banks build technical knowledge, outreach capacity to borrowers, and financial literacy amongst consumers and entrepreneurs, as well as guidance on how to do proper due diligence on technology.

Moreover, this ecosystem is able to advise banks on creating saving schemes for villagers, and convert those savings into comprehensive, integrated loans that not only include electrification and lighting, but also livelihood, housing and agricultural production. This allows banks to do group lending, and reduce the transaction cost of supporting rural electrification.

In order to scale the deployment of access to electricity for the poor in a manner that is sustainable it is critical to focus on developing an enabling environment that can enhance affordability, allowing the end user to have more choices of what suits their need without being restricted by a price point that in turn limits their choices. Local financial institutions by virtue of their proximity to customers are a critical channel that can link financial inclusion via energy access. Besides Shakti Foundation, this work is also supported by SELCO Foundation  partners GIZ India and USAID India.