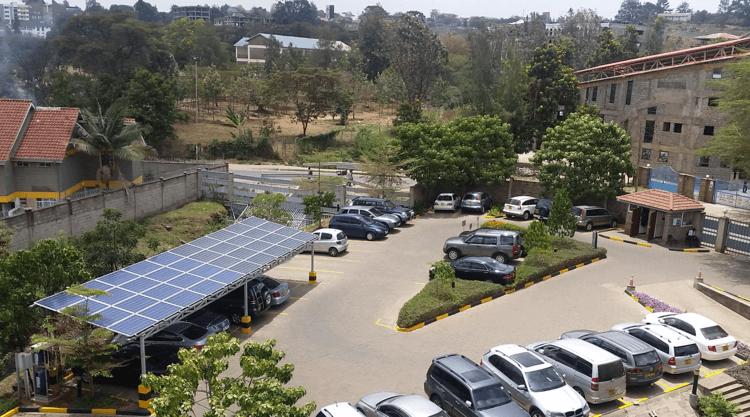 Extending the Horizon: Access to Finance and Kenya’s DRE Market

A few weeks ago, our Director of Research, Dr. Rebekah Shirley, took a post-conference opportunity to explore the catalysts of growth in the Kenyan decentralized solar market. In this article, she shares key insights and reflections from KEREA, Steama.co, Azuri and Tropical Power.

A bright midday sun slowly burns through the crisp morning chill as we pull into a quaint lane in front of the Strathmore Business School. The campus is abuzz with young Kenyan students in maroon and navy blue sweaters, loaded with backpacks, chatting and laughing as they flit between classrooms and cafeterias. After thanking my Uber driver I enter the gleaming B-School building which, just recently erected in 2012, is already one of the most well-known green buildings in Nairobi. Indeed, through the glass walls of the stairwell I can clearly see the solar canopy of the parking lot, a small part of the B-School’s 1MW solar photovoltaic installation which both allows Strathmore to both generate its own electricity and feed to the grid under its Power Purchase Agreement (PPA) with Kenya Power. The University aims to be the first zero carbon footprint campus in Sub-Saharan Africa and seems to be well on its way. Just like the many other rooftop Photovoltaic (PV) and Solar Water Heating (SWH) systems now common to the Nairobi skyscape, Strathmore is a budding sign of the times and of Kenya’s commitment to distributed renewable energy.

The energy sector in Kenya is among the most active in Africa. Generation capacity increased by almost 50% over the past five years to 2298 MW in 2015, with even more compounded growth rates expected in the future. Most of the new added capacity has been and will continue to be large, commercial renewable energy projects such as wind and geothermal plants. Despite these advances, only 32% of Kenya’s population is connected to the grid, representing major market potential for off-grid energy services. In fact Kenya is now one of the most promising distributed renewable energy (DRE) markets in the world, home to the largest concentration of off-grid solar providers in Sub-Saharan Africa currently serving over 3 million households, many through mobile payment systems. Kenya is often lauded as an example for other countries to follow for off-grid market growth and development. But what were the real catalysts that created this market boom? And what factors will lead to the further unlocking of Kenya’s off-grid market in the future? I’ve been interviewing local DRE companies and sector players for the past few days searching for answers. Landing on the third floor of Strathmore, I survey the solar canopy one last time and enter the Kenya Climate Innovation Center to meet with the Kenya Renewable Energy Association (KEREA) where I plan to ask the very same questions.

I meet Cliff Owiti, Senior Administrator at KEREA, who is a wealth of knowledge on the history of Kenya’s energy sector. He explains that KEREA was established in 2002 by the Bureau of standards as a non-profit association with the mandate to facilitate growth and development of the renewable energy business sector in Kenya. So they’ve seen the industry emerge from its infancy, and echo the same sentiments that I’d been hearing all week during my interviews. Micro-grid and Solar Product companies alike agree that a combination of forces have been at play in Kenya. First, the importance of early market development work done by associations like KEREA and Lighting Africa cannot be understated. The Quality Assurance Program drastically improved the products on market and strengthened consumer confidence while the Technician Training program quickly grew a local, skilled workforce for the industry, and a combination of innovative above-the-line and below-the-line marketing initiatives helped educate consumers and create a demand for products.

Second, many companies pointed to specific government policy as fundamental to Kenya’s enabling environment - most critically the 2014 removal of a 16% VAT for imported solar products and accessories, which allows service providers to directly pass on saving to customers. A recent amendment to the East African Community (EAC) Customs Management Act deleted ‘spare parts and accessories’ (which includes energy efficient appliances such as fans, radios and TVs) from this exemption. Owiti thinks this issue is hopefully resolvable in the near term as KEREA and other partners have been engaging the EAC in a constructive conversation about alternative language. Another factor commonly cited as responsible for catalyzing Kenya’s off-grid sector growth has been the emergence of mobile money transfer services, which drastically expand the scope for financial inclusion. Mobile money opening up access to consumer finance has enabled thousands of families to move up the ‘clean energy ladder’, from solar lights to larger solar home systems. “More than 90% of Kenyan’s now have an mPESA account” Owiti tells me, “and now the market for pay-as-you-go is around 20,000 solar home systems per year”, a clear indication of how ubiquitous solar has become through the means to pay for it. M-Kopa for instance, is a pay-as-you-go system allowing users access to a solar power system that includes a panel, three lamps, radio and mobile phone charging kit at a minimal fee. Most Kenyans are able to pay for the whole system in one year. M-Kopa alone has sold over 400,000 solar kits to households across East Africa, and continues to connect over 500 homes a day.

But despite these successes and the international example of best practice that Kenya has become, off-grid stakeholders feel that there are still critical gaps in the model, which need to be addressed. Some companies are calling for heavier subsidies, others for revised tariff policy or reduced licensing requirements, and others feel most comfortable working without further direct government intervention at all. Yet all agree on the difficulty of accessing company finance. “We’ve proven the products and the market potential, the challenge now is getting to scale,” says Snehar Shah, General Manager East Africa at Azuri, a pay-as-you-go SHS company. But there isn’t much support from private finance to make this happen. “The banks are conservative with lending, but we need their finance support if small companies are to scale up—access to structured debt, first loss guarantees, these are the kinds of options I’d like to see.” This sentiment was echoed by companies across the off-grid spectrum. Indeed, as Nkatha Michira at Lighting Africa explains “the pool of borrowers is too small for the big multi-laterals in Kenya. The companies are too young, too risky, do not have enough of a track record. Big companies like d.light and Greenlight Planet can raise angel funding and equity by themselves, but the second tier companies suffer from lack of access to finance.”

Particularly hampered by the lack of finance it seems, are the micro-grid companies. Emily Moder is the VP Operations at Steama.Co, a company that offers tariff and payment services to off-grid asset owners. She explains more to me over a quick lunch at a sunny café one afternoon. “Micro-grids tend to be harder to finance being more infrastructure heavy than say solar home systems. There is a relatively heavy, non-recoverable sunk cost involved with micro-grid infrastructure.” Combined with the issues of tariff caps and lack of data on consumers, there just isn’t consensus yet on the most appropriate business models for mini-grids. Add in the complication of uncertainty about what happens to micro-grids in the future as centralized grid expansion projects reach more and more isolated communities and you end up with a major issue of risk perception: how will micro-grids either recoup their investments or remain relevant? “So for us it’s both an issue of risk and scale”, says Emily. “How do we prove a model, and how to we get to the scale that’s worth it for banks?”

This issue of the ‘missing middle’ or the lack of access to finance for small and medium sized off-grid companies came into central focus at the UK Kenya Renewable Energy Conference, held in October, and which I had the chance to attend. The conference was put on by the British High Commission and Barclays, to encourage financiers and local renewable energy (RE) companies to interact. The day was full of glossy presentations from UK Export Import and Department for International Development, the High Commission on Trade and others, about the number of programs and instruments available to RE project developers. But perhaps the most frank, honest and insightful conversation sprung from a simple comment nearing the end of the day. It came from Dr. Mike Mason of Tropical Power, a micro-grid company running a pilot bio-gas plant in Naivasha, as he addressed the panel of financiers. “Financially speaking, small SHS companies are doing alright because their numbers can scale. And large renewable energy projects are also alright because their size means they are already at an attractive scale. So, despite all of the financial packages you all described today it seems middle-sized projects like mine, in the 10 MW range, are simply left out.” There was a hush in the room, and after a pensive moment, Daniel Marshal, VP Corporate Finance and Investment Barclays Africa voiced his agreement, and his own concern. “Financial institutions are not good at dealing with the 10 MW project. But if we are moving to a renewable energy world, we will need to understand that distributed energy options from watts to megawatts to hundreds of megawatts are all important. A bank like Barclays is not good at that intermediate size. There is indeed a hole in the middle.”

Of course, there wasn’t a conclusion of the matter during the conference itself, but it was truly telling to see bankers and financiers acknowledging a critical gap in financial flows and services. This ‘missing middle’ is probably the thing I’ve been left thinking of most since my time in Nairobi. On the heels of my trip, Vulcan recently released a white paper of findings after two years of successfully managing pilot micro-grids across Kenya with partners Steama.Co which notes the economic potential that micro-grids are unlocking in rural communities through business creation, allowing villages to capture many of the benefits of urban living while retaining valued aspects of rural life and place. Furthermore, despite the phenomenal growth previously mentioned, Kenya Power still only serves 2.7 million customers in a country of over 8.7 million households. So the socio-economic benefits of micro-grids are clear and the market potential still to be unlocked cannot be understated. The question is, will innovative private finance mechanisms step in to help unlock this potential? 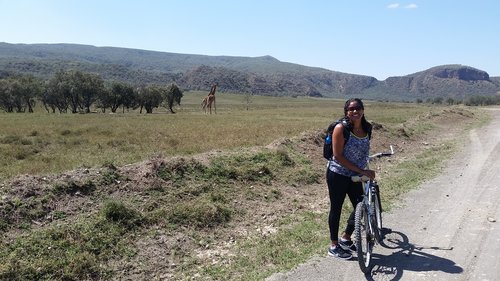 On my last day in Kenya I cycled through the Hell’s Gate National Park, passing giraffes, zebras and impala that flanked my left and right as they grazed gracefully in the savannah against the drastic backdrop of the Great Rift Valley. I mused over the beauty that disruption can cause and remember Marshal’s closing comments at the Renewable Energy Conference, confidence booming in his voice: “Kenya is poised to be the most attractive place for foreign investment in the developing world.” So I’m hoping that on my next trip here I have a new story to learn, about a disruptive innovation in finance for the missing middle sitting well within reach on the off-grid horizon.