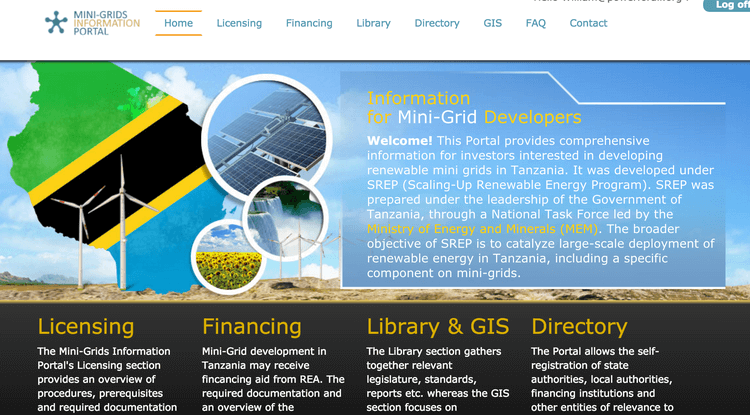 East Africa is a leader in the decentralized renewable energy revolution, and along with India it is the most closely watched market as it relates to scaling mini-grids. This is especially true of Tanzania. What happens in Tanzania will have implications for the success of mini-grids elsewhere.

The International Finance Corporation (IFC) is supporting the mini-grid ecosystem in Tanzania through its $5 million, 5 year Tanzania Mini-Grid Program, which is in partnership with the Government of Tanzania, and funded by SREP/Climate Investment Funds. The program is nearly a year old, and recently launched a Mini-Grids Information Portal, with the goal of improving access to information for mini-grid developers. The GIS mapping tool is particularly cool.

"There is a lack of information on mini-grids, so people don't know where to go", Pepukaye Bardouille, who co-leads IFC's mini-grid work in Tanzania, told Power for All. "Once developers have the information they need, then they need help to scale, which includes helping them access finance from investors and lenders who have specific requirements."

Providing information and market intelligence is one of the four focus areas for the mini-grid program. The other three are: technical standards and specifications for mini-grids, including grid interconnectivity (a major barrier to the private sector coming in); support to individual companies (helping developers refine their business models or how to go from pilot to scale); and support to financial institutions (both local banks and international investors) to better understand and assess risks in this nascent sector. It has also formed a working group with government agencies and industry to provide input and guidance on the development of standards and specifications and for the information portal.

In addition to the new information-rich portal, IFC has just completed a benchmarking exercise of the mini-grid developers from Tanzania and a handful of other markets, and will release its findings of the two dozen companies active in the space in the coming weeks.

The new portal and the work IFC is supporting in Tanzania is a best practice that should be replicated in other markets. If you haven't checked out the Tanzania Mini-Grids Information Portal, you should.