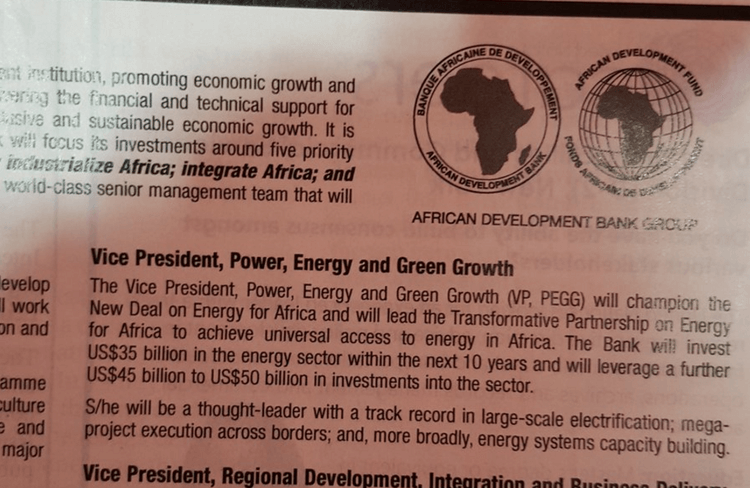 AfDB's ad in The Economist for a new energy-focused executive.

In an advert this week in The Economist, the African Development Bank posted an opening for a Vice President of Power, Energy and Green Growth (VP of PEGG), who it said “will champion the New Deal on Energy for Africa and will lead the Transformative Partnership on Energy for Africa to achieve universal energy access in Africa.” Great news, right?

Not so fast. The position’s key requirements were listed as being a “thought leader with a track record in large-scale electrification, mega project execution across borders and more broadly, energy systems capacity building.”

“Large-scale” and “mega”? Zero mention of decentralized renewable energy solutions, which are critical to achieving energy access for Africa’s more than 600 million people with no electricity, the vast majority of whom live in remote areas that are not conducive to big, expensive, and slow-to-deploy centralized grid solutions.

The total absence of decentralized in the job description is curious, since one of the pillars of the New Deal is an ambitious carve out for “off-grid” solutions. Specifically AfDB President Akinwumi Adesina said that the New Deal would include 75 million “off-grid” connections, as well as 130 million on-grid connections. Never mind that the AfDB’s target was the inverse ratio recommended by the IEA (which suggest two-thirds off-grid vs. one-third on-grid), it was still seen as a major step towards recognizing the importance of decentralized solutions in achieving universal energy access.

The importance of the new AfDB hire is not trivial, since he or she will oversee the $35 billion the AfDB will invest over the next 10 years, as well as an additional $45 to $50 billion the bank hopes to leverage for energy investments during that period.

The bias among multilateral development banks for big centralized electricity projects is well documented. As of 2014, none of the big banks, including the AfDB and the World Bank, spent more than 2 percent of their energy investments on decentralized renewable solutions. Yet, according to the World Bank’s own internal audit, their average power projects take 9 years to complete. So if universal energy access in Africa is to be achieved by 2025, which is AfDB's publicly stated goal, decentralized must be a core pathway (see Power for All’s deeper analysis of the “time to access” issue in its recent report, Decentralized Renewables: The Fast Track to Universal Energy Access).

Another perhaps troubling development for decentralized solutions in Africa was a senior AfDB hire earlier this year, when Frannie Leautier joined as a senior vice president after more than a decade with the World Bank, mostly focused on big infrastructure. The few AfDB champions of decentralized solutions are doing great work, advancing smaller-scale renewables through the Sustainable Energy Fund for Africa (SEFA) program, and pushing ahead on a green mini-grid development program, but the champions are too few, and the programs are de minimus to the needs and opportunities for innovative, non-“business-as-usual” solutions.

Largely free from legacy infrastructure, the AfDB has a chance to design the energy infrastructure of the future in Africa. Yet initial signs indicate that they may be embracing solutions that were first developed in the 19th century and have remained largely unchanged. Let's not let the power of inertia trump the rapid, cost-effective and transformative power of decentralized renewables.