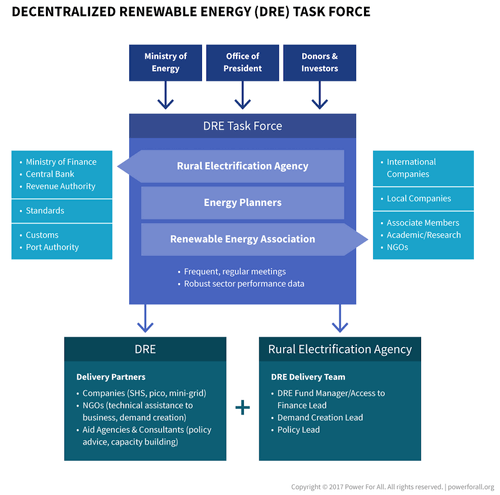 Exactly one year ago, the government of Sierra Leone embarked on a vision to achieve power for all, signing the first Energy Africa compact with the UK government. This resulted in the launch of the Sierra Leone Energy Revolution, a bold initiative to accelerate access to 250,000 homes by end of 2017 and provide universal electricity access by 2025.

The Power for All campaign, alongside other stakeholders, has worked tirelessly to achieve these targets by putting in place an ecosystem that is market-based and focused on sustainable growth for decentralized renewable energy (DRE).

An Energy Revolution Taskforce was established and spearheaded by Power for All to encourage stakeholder collaboration as well as enhance communication. This has resulted in a case study for market activation. And while the situation in every country is unique, Sierra Leone offers a successful roadmap for how other countries with the political will can spark their own energy revolution.

The taskforce, which was the mechanism for implementation of commitments by governments and stakeholders, became a platform for market activation: establishing the country's first trade association, the Renewable Energy Association of Sierra Leone (REASL); Africa’s first quality-linked VAT/tariff exemption; demand creation and awareness campaigns that led to market growth (including a school campaign by Oxfam IBIS), and development of an micro-finance association to unlock local finance.

Power for All also facilitated media workshops to share knowledge about DRE with reporters and editors, convened access-to-finance workshops (which resulted in an innovative new MFI financing mechanism), and regular government training sessions.