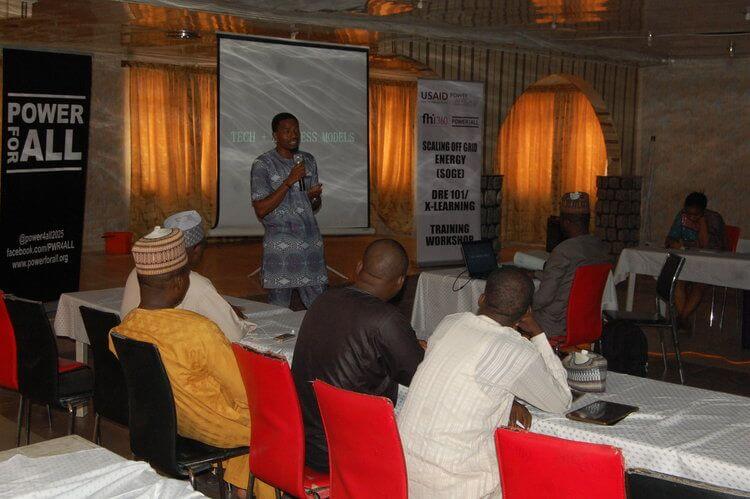 Power for All - Nigeria's Lead - Market Access, Chibuikem Agbaegbu making a point at the DRE101 workshop in Kano

The North West region is Nigeria’s second largest geopolitical zone, made up of 7 states which cover 216,065km2 and an estimated population of 45 million people, but yet its least electrified region with only 14.6 million people having access to electricity with the bulk of the un-electrified in rural communities.

Increasing electricity access to reach the 30.4 million people of the region who are unelectrified were a central part of the discussions at the DRE101 workshop held in Kano on July 3rd. The workshop was held as part of the Scaling Off Grid Energy (SOGE) project which is funded by the USAID and Power Africa and co-implemented in Nigeria by Power for All and FHI360.

The workshop, fifth in a series of regional workshops held under the SOGE project, had in attendance policymakers on power, rural development and infrastructure from Kano, Kaduna and Katsina States. Also in attendance was the Kano Electricity Distribution Company, one of the two grid-power distribution companies whose licenses covers the North West region; representatives from academic research institutes, civil society companies and DRE companies.

The workshop provided many of the participants their first knowledge contact with decentralized renewables, including how DRE solutions can be utilized to meet their goals of increasing access to energy in their states along with the various modes of payment that are available.

The training presented an opportunity for the states represented to highlight the status of their state’s energy access progress and plans what plans exist in their energy mix to employ decentralized renewable energy access to accelerate access and increase the number of connections in the state. While Katsina State hosts Nigeria’s first grid-connected renewable energy project—a 10MW solar farm—it has also had communities that were electrified through Solar Home Systems (SHS) by the Rural Electrification Agency (REA).

Kaduna State, on the other hand, has benefited from numerous DRE projects including a DFID-Solar Nigeria-funded program that powered 34 health clinics, as well as two mini-grids built by SoSAI Renewables, a Power for All partner which has gone further to set a target of 445 mini-grids by 2023 to enable the state reach its 1000MW generation target.

However, there is still a need for the states to localize policies on decentralized renewable energy, define targets for DRE generation and simplify ease of doing business for investors. The need for this was made more apparent with the admission by the policymakers that DRE solutions are needed to increase electricity access quickly.

A unique aspect of the DRE101 workshop in Kano was that it had in attendance the Kano Electricity Distribution Company whose license covers about half the region. Their participation is a boost to the possibility of private companies in the DRE sector working together with the private utility distribution companies towards the common goal of increased energy access.

KEDCO, as they are called, dispelled the notion that grid distribution companies were not comfortable with the rise of decentralized renewables; rather, they disclosed that they welcome it as enabling them to reach more people as Nigeria’s Mini Grid Regulations have made adequate provisions on how mini-grids and DISCOs can partner through interconnected mini-grids. 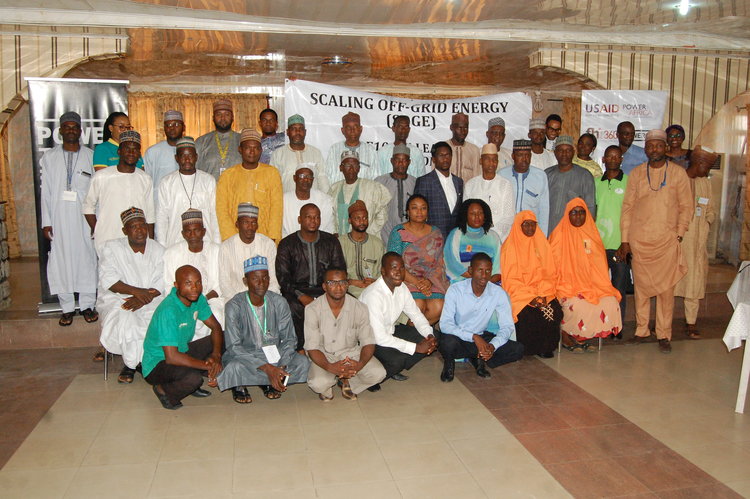 Another uniqueness was the attendance of the Centre for Renewable Energy of the Kano State University of Science and Technology, who spoke about their research projects in renewable energy. The centre is also making efforts to mainstream renewable energy into the university curriculum and is working with the National Universities Commissions, which regulates universities in Nigeria.

The goal of the Centre is in concurrence with the belief of Power for All that investment in human capital is necessary to grow the DRE sector in Nigeria and globally, and to enable skilled personnel make the best of the potentially millions of opportunities that will come from fully scaling DRE to provide universal energy access.

Isa Wada from the Kano State Ministry for Rural and Community Development, said: “This workshop has improved our knowledge of decentralized renewable energy, which has also increased our options for electrifying our communities, since we cannot continue to rely on the traditional method of grid extension alone.”

Abdulkareem Mayere, the Managing Director, Kaduna State Power Supply Company, said: “This workshop strengthens Kaduna State’s desire to increase access to electricity using decentralized renewable energy, and also provides us with ways on how to build synergy with the private sector and the electricity distribution companies in achieving this goal.”

Salisu Mohammed, the Director of the Centre for Renewable Energy, Kano State University of Science and Technology, said: “This workshop establishes the link between the academia, the industry and government policy and the need for a strong collaboration between the three in order to grow the industry.”

An important highlight of the workshop was the presentations from private companies present such as Protergia, SoSAI Renewables, Solar Sisters and ASteven Group. Their presentations were followed by an interactive session which had participants ask questions around on the capacity, durability and costs of the DRE solutions.