Over 28,000 Primary Health Centers (PHCs) serve as the backbone of public healthcare in rural India. Yet access to quality care is still a serious issue, since PHCs are often too under-staffed, under-financed, under-equipped, or under-serviced to be able to provide round-the-clock care.

Reflecting the deficiencies in the public health system, a 2015 NSSO survey found that over 72% of the rural population rely on private hospitals for treatment, spending an average of four times more than public care. Communities in remote, rural areas also have to travel long distances in difficult terrain to be able to access private healthcare.

While the public health system is dealing with these larger problems, access to reliable power tends to get overlooked as a key enabler for quality care. Yet it is a critical piece of solving the problem, as an initiative in the states of Karnataka, Arunachal Pradesh, and Meghalaya is beginning to show.

The foothills of BR Hills in Yellandur Taluk, Chamarajanagar district in Karnataka is home to the Soliga tribe, with a population of about 20,000. The lack of adequate basic healthcare in this region of widespread leprosy led Dr. H Sudarshan to establish a small clinic there in 1980. He subsequently established the Karuna Trust (KT) in 1986, which currently manages 68 PHCs in six states of India.

In 1996 KT took over the Gumballi PHC, which is one of the pioneering examples of Public Private Partnership with the Government of Karnataka. Gumballi PHC stands out by offering services such as OPD, eye care, dental care, labour room, eye operation theatre, pharmacy, and laboratory, which is beyond what PHCs typically offer.

With poor quality of power supply, one of the challenges that the Gumballi PHC faced was access to energy for conducting surgeries in the eye OT, dental clinics, and other services provided at the health centre. During the power cuts, the dental patients had to wait for hours, or appointments had to be cancelled. A frequently-used diesel generator served as back-up for all the clinic’s loads, adding significantly to operational expenses.

It is not uncommon to find generators in government-run PHCs as well. However, the operational expenses provided to the PHCs rarely support the cost of running these generators, and doctors are often required to use their own money to keep the generators on during emergencies.

As an alternative, SELCO Foundation worked with Karuna Trust to design an optimized 3.2 kW solar system for the PHC. This system provides backup for the delivery room, eye operation theater, and the dental unit, apart from the core PHC.

In the months following installation, there has been 60% savings of monthly energy expenses at the PHC. More important is the fact that the clinic does not have to turn back patients due to lack of power supply. This is important for patients, as every trip to the PHC means losing a day of labour. The confidence levels of resident medical staff too has improved significantly. 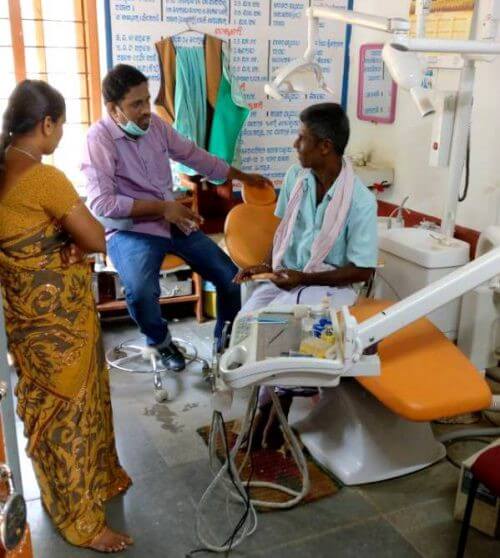 “Before, we would send the patients back home due to power cuts, or they had to wait for long hours. Now we can do more procedures due to uninterrupted power supply. Now we also see many more patients — in fact, double the previous numbers.” — Dr. Sagar, BDS, Gumballi PHC

Karuna Trust is working with SELCO to solar power 10 more PHCs in Karnataka, Arunachal Pradesh, and Meghalaya. Systems are designed after critically assessing current and future usage of the centres, the demographic and geographic context they are situated in, and the energy efficiency of medical equipment. Each system will suit its context, such as the electricity scenario, weather, remoteness, footfall, disease burden, and so on.

By using decentralized energy systems to meet local healthcare and energy needs, the use of the government’s limited financial resources is optimized. This realization is catching on, with Maharashtra, Chattisgarh, Tripura, and other State Governments also recently turning to solar power for PHCs.

About the author: Vivek Shastry works with the Policy and Planning Group at SELCO Foundation. He focusses on energy planning, ecosystem development, and energy-healthcare nexus.