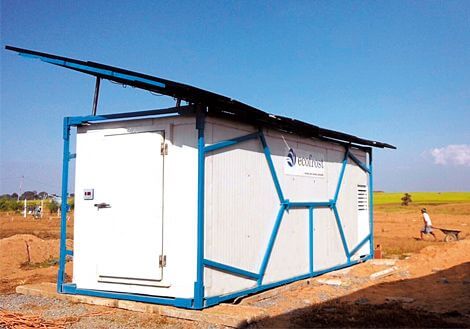 Is cold storage the next green mini-grid "anchor tenant"?

Many of India's leading mini-grid developers launched their businesses by powering remote telco towers close to communities lacking reliable electricity. While this model has provided guaranteed off-take and revenue, the search is now on for additional (and more productive) anchor loads as the mini-grid market evolves and innovates.

Solar-powered cold rooms for perishable agricultural produce is one leading candidate, and India's Ecozen is leading the charge to prove its viability. The company currently has 7 pilots up and running with mini-grid developers Mlinda and OMC Power, which are part of the Smart Power India (SPI) initiative, a $75 million program backed by The Rockefeller Foundation.

Aalok Awalikar, Ecozen's head of markets and partnerships, imagines a day when India sees cold rooms as a “standard fixture” built into commercial mini-grids as a service that farmers can use on demand to store their perishables and preserve higher value for their crops, such as cauliflower, cabbage, pea, tomato, broccoli and beans, as well as some dairy products and flowers.

"What we're trying to do is provide cold storage in a decentralized manner," Awalikar told Power for All. "If you're a farmer in India who wants to store perishable produce today, you have to travel a substantial distance to avail the service provided by conventional cold storage, which is primarily designed for low-value commodities and long-term storage. But what if we had these units specifically designed for high-value commodities and short-term storage at the local level? We would impact the whole supply chain and protect perishables for a longer period, so that farmers no longer have to make a distress sale of their produce."

Awalikar sees productive applications such as cold storage playing a pivotal anchor role in designing mini-grids in the future, especially since many of the retailers and wholesalers who could take advantage of cold storage services are existing mini-grid users.

"This is a huge opportunity" he says.

Ecozen intends for the technology to be scaleable on a market basis by developing innovative business models. Watch a short Youtube video explaining Ecozen.