Designing Energy Markets of the Future

A Power for All survey of leading decentralized renewable energy (DRE) companies has revealed the practitioner's view of priority policies for market growth. Designed to complement a wider study on national policy and energy access—to be released on March 22—the survey captures insights from 23 DRE companies which, combined, provide pico-PV, solar home system (SHS) or mini-grid services to over 2.7 million households. Asked to rank the importance of policy instruments—national energy policy, financial policy and regulation, and technical regulation—in supporting their local business operations, the results provide front line insight into the policy actions needed to scale DRE and boost energy access. Check out the findings below, and stay tuned for the full report.

A DRE penetration target and time frame was identified as the  most influential national energy policy. As one respondent explained, “only explicit (penetration) targets and time frames seem to be leading to proactive support from the Government for DRE - general inclusion of vague targets alone has so far not shown to be very promising”, adding that “having a defined timeline and target penetration for DRE ensures that the government is held accountable for achieving that target." While specific DRE targets came out as the number one policy overall, mini-grid companies specifically prioritized the importance of national electrification plans which integrate DRE—marking the vital role that “knowing where the grid will go” will play in de-risking the mini-grid market for investors.

While a raft of financial policies and regulations were deemed crucial to catalyze market growth, across a range of DRE technology companies, a majority of respondents were in agreement on the top priority: exemption from import duties and tariffs on DRE. Duties can have a significant impact on sales in an extremely price sensitive market, with high tariffs increasing costs by up to 40 percent. As one SHS/pico-PV respondent advised, “exemption from import duties allows us to pass along lower costs to customers and make products more affordable.” However, financing support—including debt financing and loan guarantees—was also highlighted as particularly important by mini-grid operators, with one mini-grid respondent taking the view that due to the need for “risk mitigation in emerging markets, finance is the most critical element.” 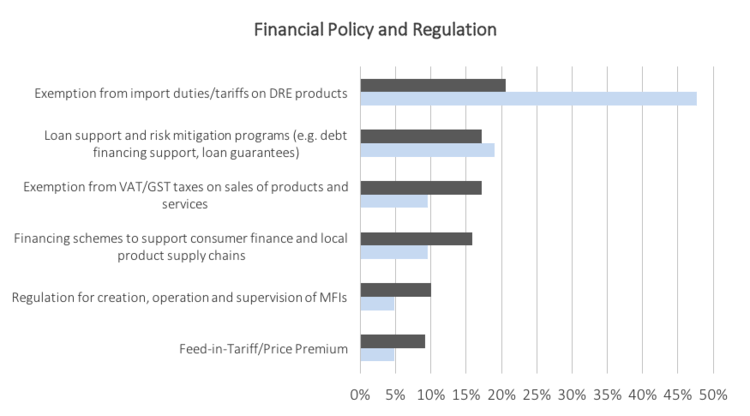 With respect to technical regulation, clear and low-cost permitting and licensing regimes for DRE companies, along with the adoption of internationally recognized product quality standards and performance reporting requirements, were the two most important regulatory measures identified. Almost two-thirds of companies that sell SHS/pico-PV ranked adoption of quality standards as the number one policy, and 75 percent of mini-grid only companies chose clear, low-cost permitting and licensing regimes—with one mini-grid respondent noting that licensing is “the first stumbling block when looking to enter a market.”

While a range of policy measures will be needed to enable the DRE market to reach its potential—and increase its reach from 100 million people to 10 times that number—knowledge from practitioners who have already brought clean power to millions show us that supportive tariffs and taxes, improved access to finance, clear licensing, standards and reporting, and DRE penetration targets and integrated planning, are a great place to start.