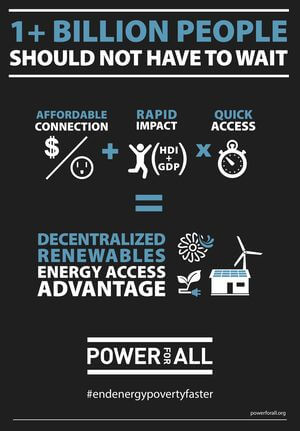 Power for All’s Calls to Action are designed to prioritize solutions that address urgency and speed on the global effort to end energy poverty. The missing link between pace of funding and speed of access means that many of the projects MDBs invest in actually limit the ability to meet global goals for electrification. These calls to action include:

“Energy access is central to nearly every major development challenge the world faces today, and with decentralized renewables, it doesn’t have to wait,” said Power for All’s Kristina Skierka, director of the global campaign. “The disproportionate MDB financial support for slow, expensive centralized power projects over fast, cost-effective decentralized renewables is perhaps one of the greatest missed opportunities in development today.”

An independent evaluation of  the World Bank Group’s support to electricity access between 2000-2014 noted that the median implementation time of World Bank investment projects was nine years—meaning that many of the projects MDBs invest in limit the ability to meet global goals for electrification. If MDBs prioritized energy projects based on time to access—part of  energy access opportunity costing—decentralized renewables would emerge as a key energy source for unelectrified countries, and help the banks achieve their stated goals for universal energy access by 2030.

Power for All is a global campaign to accelerate the deployment of market-based distributed renewable energy as the key to achieving universal energy access. The campaign serves as a collective voice for businesses and civil society focused on decentralized renewable solutions, including decentralized solar, hydro, biomass and wind designed for households and businesses. Power for All is funded by UKAID and the ClimateWorks Foundation. www.powerforall.org