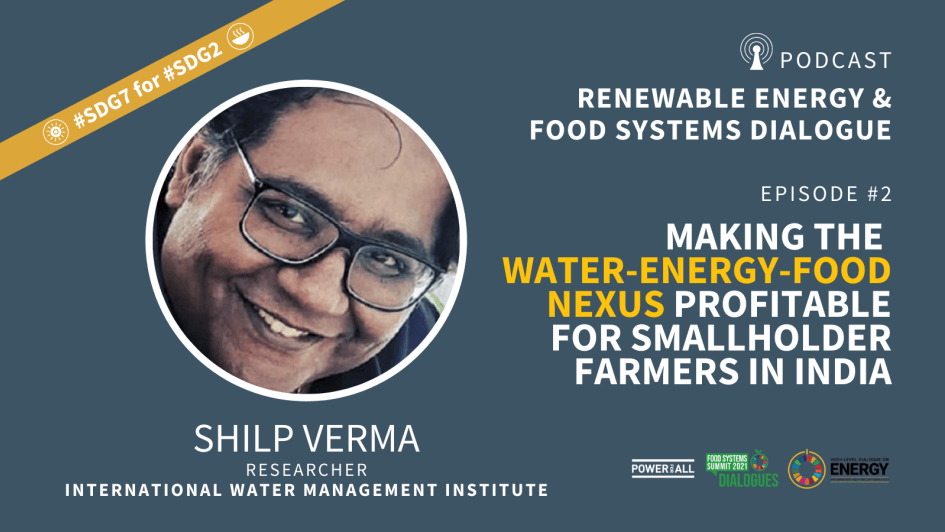 Solar as a Crop: Making the water-energy-food nexus profitable for smallholder farmers in India

Power for All · Solar as a Crop: Interview With Shilp Verma

In this episode of the Power for All podcast, William Brent speaks with Shilp Verma, a Researcher at the International Water Management Institute (IWMI), and a leading expert on the nexus of food, water, and solar energy. In support of this year’s UN Food Systems Summit, this podcast is part of a special series focused on the critical link between food systems and decentralized renewable energy, aimed at highlighting game-changing ideas in Africa and Asia that can help ensure sustainable energy for all and improve farmers’ lives.

Here’s a summary of the conversation:

IWMI has been making significant advances in understanding how to scale solar irrigation and the potential impact of doing so on smallholder farmers. India already has the world’s most ambitious solar irrigation scheme, and linked to that is the Solar Power as a Remunerative Crop (SPARC) program run by IWMI that aims to reach 2 million farmers by 2022.

There isn’t any other country in the world that pumps as much groundwater every year as India. There are more than 20 million wells for irrigation. Given the centrality of groundwater to India’s large irrigation economy, the water-energy-food nexus that IWMI is working on is very important. There are parts of the country where groundwater is depleting very fast, and a major contributor to that depletion is the subsidized electricity that the government provides to farmers. Subsidized electricity makes water either free or at a very low marginal cost, which results in overpumping. In this context, solar pumps gained more popularity, a growth supported by government incentives. While it was wonderful that we were replacing coal-based power with clean energy, from a water management perspective, there were concerns that this would lead to even more groundwater pumping.

The increasing concern over overpumping of groundwater led to the development of the SPARC program. Firstly, SPARC aimed at reducing the carbon footprint of India’s groundwater irrigation economy. Groundwater pumping contributes about six to eight percent of India’s total emissions. Second, the program -- solar as a crop -- can offer farmers an additional source of income and offer resilience in the event of failed crops owing to extreme climate events. Thirdly, it can help reduce India’s power subsidy burden. By offering farmers free or subsidized power, India spends US$ 12 to 15 billion every year. This bill can be significantly reduced if we solarize agriculture, and also improve the financial viability of the utilities. Lastly, if solar farms can offer new incentives for farmers to become energy and water efficient, then the introduction of solar pumps can become part of a larger groundwater demand management strategy for the country.

The program aims to impact 2 million farmers who are close to a feeder that’s connected the grid by converting that feeder to solar power as well as providing standalone solar pumps that individual farmers or farmer collectives can use. Initially, the idea was to replace diesel or kerosene pumps with solar pumps and it was thought that those who were already using electric pumps would be hesitant to make that shift as, even though the prices are now lower, it would still be a significant capital investment. Therefore, rolling out the program by allowing them to continue being connected to the grid as well as have the option of supplying surplus power back to the grid and earning money from it was a good incentive.

Based on initial data from this initiative, there’s been about 60-65 percent of energy being generated by these farms going back to the grid, and in some villages, IWMI has seen that this has resulted in about half of the income of farmers is attributed to solar pumps. They’re still growing the same crops as earlier, but now half their income is from solar in two ways. One is from the surplus energy they’re selling to the grid, and the second is from the irrigation service they’re providing to their neighbours.

There is a strong climate mitigation story from the work IWMI is doing as well. As mentioned earlier six to eight percent of India’s emissions come from irrigation, which includes the impact of pumping from 20 million wells. With increased government push in recent years, India has increased its solar pumps from 1000 to 300,000 with a total capacity of about 40 gW and there is potential for India to meet its solar targets if all of agriculture were to be solarized. It is a very ambitious target but it will not happen overnight, but rather, over time, if we continue to head in that direction. However, there are a lot of variables. Most farmers don’t know about solar pumps, it’s still early days, and the prices of solar technology is changing every day so we don’t know how long the government would be able to offer these hig capital subsidies. At some point, the government will want to reduce subsidies and let the market take over. And that will only happen if the technology keeps improving. The government is also now trying to encourage more local production, which isn’t very high right now. A lot of solar panels are still being imported and locally assembled.

With the PM-KUSUM scheme, one issue is subsidies, which at present is distorting the market, and a second issue is, as mentioned earlier, the groundwater overuse or misuse. The subsidy issue is an important one. Right now, about 95 percent of the solar pumps on the ground are there thanks to subsidies and if that subsidy was removed overnight, the growth in solar pumps might significantly change. On the positive side, the kind of saving that the government can make in farm subsidies can itself finance solarization. If increasing solar pumps can mean a reduction in other subsidies the government gives, then it may not be such a big issue. On the issue of groundwater, merely handing out solar pumps is not going to solve the problem. The implementation of SPARC requires a lot of engagement with farmers and remains to be seen whether the government, the utilities and even smaller developers and the private sector will be able to do that on a large scale. Groundwater depletion is a big problem and one that the government is series about tackling. There are other programs focused on improving groundwater management and governance. But what usually tends to work is supply augmentation. If there are programs to increase groundwater recharge, then farmers would enthusiastically participate. But it’s the demand management side that has been tricky, not just in India, but almost around the world. It’s been done on a small scale in many places, but it’s been a struggle to scale up. You need to have clearly defined water rights, which we can’t have because each farmer is very small and there are millions of them. Enforcing water rights would be costly and very difficult. It could be achieved by imposing a true cost of economic cost of water. But that is also very difficult because of the political economy around farm subsidies. That’s where programs like SPARC could be introduced to make it part of a larger groundwater demand management strategy. If a program like SPARC can be scaled up to solarize feeders, it becomes easier to manage groundwater usage through a group of smallholder farmers.

Making the nexus work in India and beyond

Over half the population of India depends on agriculture, so it’s hard to make significant changes without political involvement. On the one hand, people have been telling farmers that they need to conserve groundwater, but on the other hand, the policies around giving free or subsidized power tell them they can pump as much groundwater as they want. With SPARC, the hope is that the policy environment and the efforts of civil society would be more aligned. For the first time, it is in the farmers’ direct economic interest to become efficient energy users and therefore efficient water users. This is still in theory. It is happening on a small scale with pilot experiments, with an expectation that this will eventually expand to reach two million farmers by next year. Beyond irrigation, there are field experiments on other productive uses of solar power in many parts of the country. In addition, in order to allow for solar power to be used more efficiently, the government is considering a universal solar pump -- a device that would enable farmers to use the energy produced for other uses.

Other South Asian countries are also interested in learning more about grid-connected solar. IWMI is working with Pakistan, Nepal and Bangladesh and advancing the discussion on piloting it in these countries, as well as working with some African countries to promote more South-South learning.