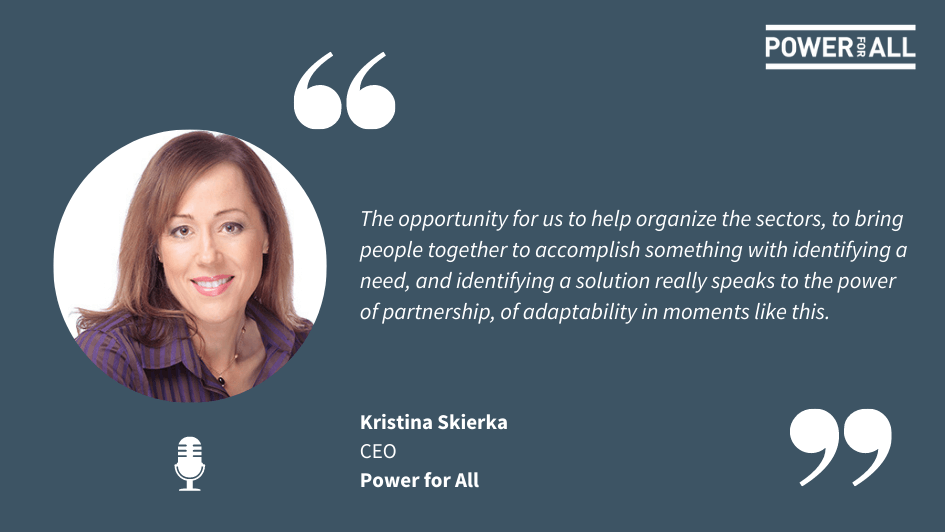 On the Road to Ending Energy Poverty: Six years of Power for All

In this episode of the Power for All podcast, Anand Prabhu Pathanjali speaks with Kristina Skierka, founder and CEO of Power for All about the campaign’s six-year journey on the road to ending energy poverty.

Power for All · On the Road to Ending Energy Poverty: Interview With Kristina Skierka

On the occasion of the sixth anniversary of Power For All, Kristina looks back to the time when she had entered the decentralized renewable energy sector, working with d.light, a pioneering clean energy company. The sector was seeing a 30-40 percent increase in owning and operating distributed renewables in different rural communities. Around this time, the IEA released a report discouraging use of this technology, outlining unsupportive data. Due to this, Kristina felt the need to campaign and change the narrative around DRE and thus, started Power For All.

The idea of Power For All has always been about accelerating change through partnerships. The DRE sector is not a standalone category. Working with NGOs to adopt “ending energy poverty” as their goal, collaborating with companies to recognize and showcase  their work, and stepping forward to take a place at the global energy table is where Power For All has positioned itself.

The idea of using campaigns to advocate for the role of DREs in the energy sector is that campaigns have a definite beginning and end, with a specific goal. Operating in Africa, south-east Asia and India, the goal is not just creating connections but going beyond energy access, powering livelihoods and changing agricultural outcomes as well.

Power For All’s approach has always been multi-sectoral. Various stakeholders such as local communities, NGOs, DRE companies, policy makers, and the media are involved in every step of the process. Both top-down and bottom-up approaches are synthesized to ensure that the ultimate goal is reached. This is done by working with local community leaders and change-makers, and at the same time striking partnerships with top leaders in the sector. Upskilling of those involved either internally or externally is also emphasized upon, by providing the right tools, knowledge and assistance in capacity building.

Over the last few years, the one transformation that is evident, especially in India is the perception attached to Off-grid technology. Earlier, it was associated with not being good enough, or being sub par. But with the change in nomenclature to Decentralised Renewables, it has been recognized as a legitimate source of energy in the sector.

Additionally, large players within the energy sector such as the IEA  have been more welcoming of DRE technology, especially with regards to mini-grids. This has led to the creation of various DRE specific programmes to be implemented as well.

Within the context of the Covid-19 pandemic, the healthcare sector has been the area of scrutiny, especially in terms of infrastructure and accessibility. It has brought to light a problem that has existed for long–unelectrified healthcare centres across South-east Asia, India and Africa. This can be easily resolved through DRE and that is the solution that Power For All has managed to bring into discussion. In its ability to be flexible, identify problems at the local level, provide solutions through DRE as well as upscale these solutions, Power For All has been at the forefront of driving change.

Podcast Addict
See Also
Interview with Raffaella Bellanca of the World Food Program: Energizing the School Feeding Program Interview with Magda Moner & Sandor Szabo: Affordability of PV based electricity generation on rural electrification Solar as a Crop: Making the water-energy-food nexus profitable for smallholder farmers in India Interview with Todd Moss: Increasing Energy Access Ambition for Global Development Investing in Scale: The opportunity at the nexus of food and energy