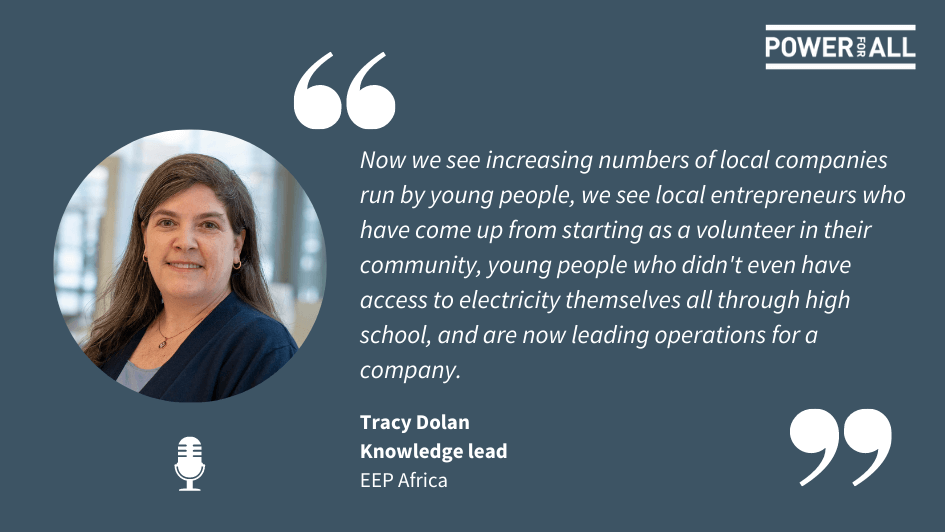 Power for All · Youth and Clean Energy Jobs: Interview with Tracy Dolan

In this episode, Power for All’s William Brent speaks to Tracy Dolan, knowledge lead at EEP Africa, about clean energy innovation and employment, the challenges and opportunities in the sector, and the launch of the Rising Energy Leaders Award. Here are some key takeaways from the conversation:

About one fifth of the population of Africa is between the ages of 15 and 24. That’s 225 million people. And about a third of them are unemployed. At the same time, there is a huge number of people entering the job market each year. EEP Africa found that in the last decade of their work supporting early stage and start up companies in the clean energy sector that there is a lot of potential to increase jobs in the sector, both through direct generation of energy, and through the use of energy to provide a service. With direct jobs, there’s design and construction, especially large scale projects like solar pV or hydro power, wind; as well as sales and marketing jobs with solar home system companies and cookstoves. These jobs are often in rural areas where many companies hire local technicians on a part time or commission basis. These have the potential to grow as off-grid value chains are growing rapidly across Africa.

Then there’s jobs created through productive use of energy in the agricultural sector with food processing, solar irrigation, cold storage and others that help smallholder farmers grow their business and reach markets more easily. Then there’s jobs in the service sector when mini-grids are deployed in a community and a number of micro and small enterprises develop in that community.

While there’s a lot of potential, a key challenge is the financing gap where successful companies are unable to scale up fast enough and have the funds for targeted recruitment. This needs to be addressed.

Innovation hubs and accelerator programs can really bring out the potential of young entrepreneurs. Ten years ago, many youth entrepreneurs at EEP Africa’s program came from Europe or the US to Africa to start companies. But now we’re seeing an increasing number of local companies run by young people who first got a few years experience with an international company, or received some training support through an innovation hub and are now starting their own businesses. And this is now raising the interest of funders wanting to invest in local entrepreneurs, tapping into the local ecosystem of talent and consumer base. Many local entrepreneurs have come up from starting out as volunteers in their communities, some of whom didn’t have access to electricity themselves all through high school and are now leading operations for a company at the national level. There’s a new generation emerging in the sector in Africa.

Power for All’s Powering Jobs Census 2019 showed that young people represented about 40 percent of all decentralized renewable energy jobs in Nigeria and Kenya. So, there's a huge opportunity, but there is an urgent need for adequate finance.

Some of the other barriers to young people being employed in the sector is the shortage of qualified engineers and technicians. In Kenya, for example, in a population of 45 million people, there’s just about 2000 certified engineers. There's a lack of training in renewable energy technologies and digital skills. And then there’s lack of training in business and leadership skills. There’s also a lack of awareness among young people about the opportunities in the sector. This is starting to change, but there are still many young people who feel they need to study auditing or law in order to have a successful career and see other opportunities and go after them. To address that, some of the EEP Africa companies are increasing collaboration with educational institutions, partnering with vocational colleges, engaging with universities and providing input into the national curriculum. All of this to ensure there’s a clear link between people coming out of these institutions who meet the needs of the sector, and that these young people have access to those jobs. Many companies also have in-house training programs and are willing to hire unskilled or inexperienced workers and train them up. These include technical and financial skills, along with leadership and communication skills, active listening, and even psychology, to make them more effective sales agents.

But this cannot be left to the companies. There need to be more public initiatives. There’s a huge amount of time and resources needed for this. More public initiatives and online programs to make training more accessible to people in rural areas, which can be developed collaboratively with the industry and local governments, can help solve the skill gap and improve the sector overall.

Young women are more negatively affected by unemployment than men. About 35 percent of young women are not in employment or education as compared to 20 percent of men similarly impacted. How do we encourage more young women to join the workforce? This is a critical issue that needs to be addressed in order to have an inclusive energy sector and one that really meets the needs of the consumers. Over the past 10 years, EEP Africa has created 9000 jobs; about 40 percent have been for youth, and about 40 percent of them for women as well, with an aim to push that even higher. In 2019, EEP Africa issued a call for proposals with a gender theme, focused on promoting women in leadership and promoting opportunities for women within the clean energy sector. Eighteen projects were funded as part of that call, and many had a specific focus on hiring women, training women, raising awareness among women about the opportunities in the sector. Some of the barriers we saw were lack of access to mobile phones or digital technology. In many households, women do not have access to mobile phones and have to rely on their husbands. To address this, programs are now implementing digital inclusion and training for young women. Other programs are focusing on hiring only women for jobs like solar battery charging hubs, and for many of these women, this is their first job. Many of them are 18-20 years old and just out of school. However, these are still initiatives at the company level. We need larger programs as well in collaboration with various sector players, where companies can target their recruitment and training and then partner with initiatives like Power Africa or the government. This takes time and dedication, and many companies don’t have the time or finances to do as much as they’d like, which is where grants or other forms of affordable financing can come in to help stimulate that. This is where public sector funding can also play a key role.

We need an energy transition, but it has to be an inclusive transition, and also a gender and generational transition. The EEP Africa Project of the Year Award, which has been on for many years now, supports young entrepreneurs, and now there’s also the new award for Rising Energy Leaders whose goal was to shine a spotlight on some of the new generation of energy leaders in the sector in Africa who are leading the transition to clean energy. In 2020, the first batch of five leaders were selected for the award, and four of the five were women. Read more about the award winners here. These are dynamic young people who are leading companies as entrepreneurs and taking it to the next level by lobbying with their national government for policy change since they’re the ones closest to the issue and have experienced the challenges themselves and are able to come up with solutions that fit the communities they come from.