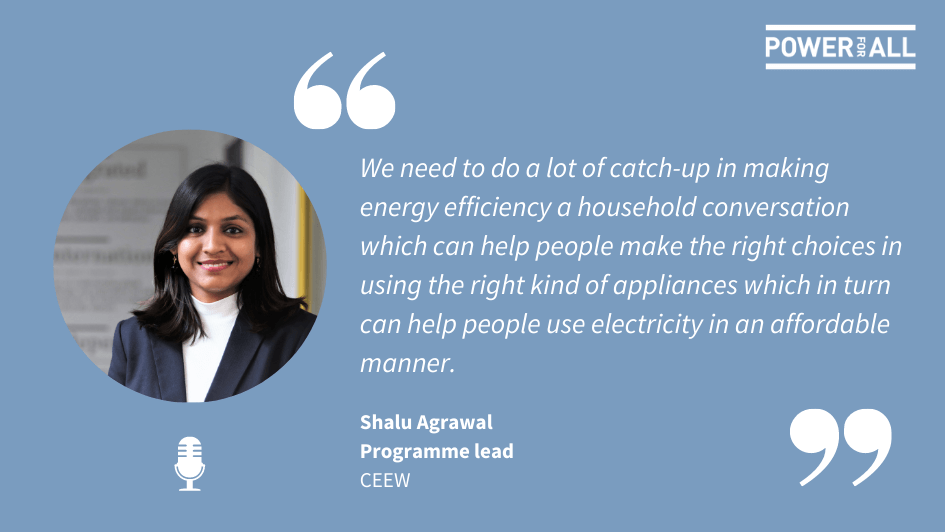 In this episode, Power for All’s Divya Kottadiel speaks to Shalu Agrawal, programme lead at the Council on Energy, Environment, and Water (CEEW) on the Indian Residential Energy Survey 2020, the largest pan-India survey conducted by CEEW and ISEP on energy access and consumption patterns in Indian households. The survey covered 14,850 households from 152 districts in the 21 most populous states, accounting for  97 percent of the Indian population.

Power for All · India’s electrification story: Interview with Shalu Agrawal

IRES provides detailed information about the state of electricity and cooking energy access, energy consumption and expenditure patterns, equipment characteristics for major end-users, including cooking, lighting, space cooling, heating and entertainment, as well as appliance purchase behaviour, and awareness about star labeling and energy conservation behaviour among Indian households. Here are some key takeaways from the conversation:

Saubhagya was success, but more needs to be done

There’s no doubt that Saubhagya has been successful. The IRES survey found that 97 percent of Indian homes have electricity. To put this in perspective, at the turn of the century, just about 50 percent of households were using electricity for lighting, which means 750 million households have been electrified in the last 20 years. This has been the result of several government initiatives focused largely on grid extension, including the launch of Saubhagya in 2017 which pushed last mile connectivity. The last two years, 26 million households were electrified, and this included decentralized renewable energy (DRE) solutions where grid extension was not feasible. However, the survey found that a majority of households used these solutions as back up power rather than primary access.

Those who are yet unelectrified, accounting for about 2.5 percent of the population, are mostly in rural areas. Many said the reason was their inability to pay the monthly bills. It’s important to note that while connections were offered for free under Saubhagya, households are still expected to pay recurring bills. In several areas, this affordability challenge keeps households off the grid, despite the heavily subsidized tariffs. Even a bill as low as INR 100 ( USD 1.4) per month is a deterrent for poor households.

However, on the supply side, there has been a noticeable improvement in the last five years. The last Access Survey reported an average of 9 hours a day of power supply in rural Uttar Pradesh and Bihar, while the IRES found that this had gone up to 18 hours a day. There’s also an improvement in satisfaction levels. In Bihar, 7 percent of households said they were satisfied with their connections in 2015, which has gone up to 82 percent of households now saying they’re satisfied. Of course, we can’t ignore that there are still people who are not satisfied, and this is because of voltage fluctuations, high prevalence of power cuts and other issues, which are closely tied to the health of the utilities. This is an area of significant concern. In many rural areas, households comprise a majority of the utilities’ consumer base, but the recovery rates are poor. This leads to untenable losses for the utilities which they are often unable to recover from.

We need a multi-pronged approach

But all is not lost. India can leverage the significant gains made by Saubhagya and grid extension and implement a multi-pronged approach to ensuring true universal access for all. Firstly, those households left behind need context-specific and need-based solutions to address electricity access challenges. Distributed energy solutions like solar home systems (SHS) and mini-grids can play an important role in this process. This was a component under Saubhagya and it also aligns well with the country’s goal of achieving 175 GW of renewable energy by 2022.

Secondly, power sector reform will be crucial in addressing the challenges of reliability of power supply. Through monitoring operations, implementing corrective measures, periodic maintenance, rolling out smart metering systems and other advanced technologies, ensuring regular bills and payment collection, and meeting the needs of the consumer in a proactive manner, the utilities can improve the reliability of power supply. We also need to try different models like distribution franchising, revenue franchising, which we’re already seeing some of, but more is needed.

Thirdly, the affordability challenge needs to be addressed by directing subsidies where they’re needed the most. We already have high subsidies, but instead of increasing the subsidy pie, we need to direct them to the right place, for example, ultra low tariffs for those on the margins.

Fourthly, we need an ecosystem where the suppliers are engaging closely with the consumers to build trust and raise awareness about the rights and responsibilities as consumers. Miscommunication in some pockets led people to believe they were going to receive free electricity and were subsequently disappointed when they received recurring bills. There needs to be effort and engagement to ensure power needs are being met in a financially viable and responsible way.

Lastly, while most of these electrification efforts were focused on the household level, there is a need to invest in productive use and livelihoods as well. Unless household incomes increase, they will not be able to meet their increasing demand and need for electricity services.

Energy efficiency is an important part of the access story

People don’t usually talk about energy efficiency when they’re talking about energy access. But efficiency is an important part of the access story. As a result of improved access, many Indian homes started buying more appliances. Around 20 percent of households bought their first fan or television set in the last decade. This increase is consumption and the increase in tariffs led to higher electricity bills. Yet, people are usually shocked at high electricity bills when they’re using what they consider to be low consumption appliances like lights, fans and televisions. But that’s just how our appliances are. High consumption appliances like air conditioners, washing machines, refrigerators, pumps are used by less than 33 percent of Indian households. The only way to make electricity affordable for consumers in the medium to long term is through energy efficiency. The problem is there is very little awareness about this. Take fans, for example, about 93 percent of households have at least one fan, but only 3 percent have energy efficient fans, which are more than 50 percent more efficient than regular fans. Only 25 percent of households said they were aware of star labeling and this awareness was much lower in rural areas. We need to do a lot of catch-up in making energy efficiency a household conversation to help people make the right choices and use electricity in an affordable manner. Energy efficiency is a key pillar in the fight against climate change, which hurts those on the margins the most. Energy efficiency has focused on large, high-end appliances used by higher income households. But appliances like fans do not feature in these conversations and so rural households are left behind. We’ve seen significant progress with lighting, and that is the sort of intervention we need for other mass appliances like fans as well.

In the past we’ve looked at access and efficiency separately, but these issues are interlinked. A national level survey like IRES needs to be institutionalized by the government so that we can plan better and make our policies and programs responsive to the ground realities and help us address the electricity access challenges in a better way.

See Also
Interview with Raffaella Bellanca of the World Food Program: Energizing the School Feeding Program Interview with Magda Moner & Sandor Szabo: Affordability of PV based electricity generation on rural electrification On the Road to Ending Energy Poverty: Six years of Power for All Solar as a Crop: Making the water-energy-food nexus profitable for smallholder farmers in India Interview with Todd Moss: Increasing Energy Access Ambition for Global Development