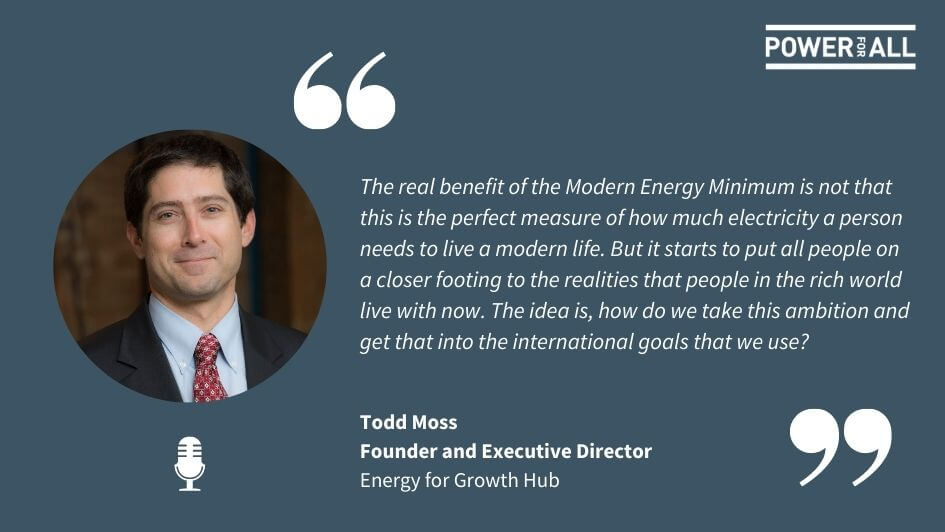 In this episode, William Brent speaks with Todd Moss, Founder and Executive Director of the Energy for Growth Hub and an expert on energy, finance, and foreign policy, on the recent launch of a new framework called the Modern Energy Minimum, or the Minimum, for short, which calls for a huge jump in ambition for what the global development community considers basic energy access. This was developed by 14 scholars who looked at data, historical trends and came up with this framework that includes household consumption as well as non-household usage.

The Minimum calls for increasing the energy access threshold from 50 to 100 kW per hour per person per year -- which is enough to power a few light bulbs for a few hours a day and to run a small fan -- to 1000 kW hours per person per year. This would be 30 percent from home use and 70 percent consumed in the wider economy.  The current measure for energy access is a good start, 50 kW hours of electricity is a bare minimum. No person on the planet should be living with less than that, and it’s a shame on the international community that we still have people that don’t even have this basic access. So while we need to commit ourselves to getting everyone to this first step, we also need to acknowledge that this isn’t very high. If you look at basic income, the international poverty line is set at US$ 1.90 a day; and then the World Bank has another line at US$ 5.50 a day, which is a step up the income ladder. But of course, we want people to become richer than just US$ 5.50 a day.

With energy, we still only have that first step of 50 kW hours if you live in rural areas, and 100 kW hours if you live in a city. But what is the next step? It might seem like 1000 kW is ambitious, but in some ways, it’s not. It’s not really a 10-fold increase. There’s a three-fold increase for household huse and then a measure for what is being used outside the home. This is based on the fact that actually most electricity that we use is not at home. It’s in the wider economy. It’s in the things that we use, it’s in the factories where we work that produce goods that we use. It’s now increasingly in the cloud, in the digital economy -- which has become especially important in the time of a pandemic where so many people are locked down.

The proposed increase would obviously come with its own implications, including the need for financing. Affordability is already an issue for many people, and it would be an even bigger concern. But on the positive side, consuming more energy could also mean improved incomes, greater economic activity, and more employment. And these two lines will eventually intersect. When it comes to the relationship between consuming energy at home and consuming energy in the wider economy, if you’re very poor, you’re not going to be able to afford 300 kW hours at home, much less the appliances that you need to turn that electricity into something useful. That’s why having the non-household energy component is so important. Not always, but it is generally true that people use energy outside the home to create income, which then allows them to use energy at home to live a better life. We’ve seen this interplay between income and energy both inside and outside the home from examples in countries where there has been heavy investment in electricity consumption outside the home, and in countries where it’s been the opposite -- investment in household energy first. But we need both and that is what the Minimum is trying to get at and see how these two components can play off each other in a more positive way.

The Minimum does not include cooking in it’s framework. This was something the researchers debated for a while, and the question was whether this was going to be about energy more broadly, and a kW equivalent of that, or whether it was just about electricity. If we wanted to include enough electricity for everyone to boil water at home, it makes the numbers significantly larger. Right now, in many places, we wouldn’t expect that to be the case, at least not for the next ten years. Given the wide mix of cooking fuels, it was decided that the Minimum would just stick with electricity. But if we were expecting people to be able to use electricity to cook at home, then 300 kW hours per year is not even close to enough. But this also opens up an important wider point -- transportation, which right now is mostly liquid fuels. As electric cooking and e-mobility continue to rise, at some point, the Minimum would evolve to reflect the new dynamic.

We’ll see two trends emerge. One, lots of improvements in efficiency in electric appliances which would push the need for higher levels of consumption down. But at the same time, there’s the second trend of electrifying everything where vehicles -- two-wheelers, four-wheelers, trucks, buses -- and lots of things are going to move to electricity, which would drive consumption higher. Eventually, the metrics we use will have to adjust to these realities as the market evolves and we see higher demand for electricity-driven appliances and machines. But right now, in most developing markets, e-mobility is barely just getting started and it’s not a significant portion yet. Same with electric cooking.

A number of measures use appliance ownership and other metrics for energy access, as many argue that consumption is no longer the most appropriate measure for this. While asset ownership is a promising measure of household wellbeing, there’s so many things embedded in consumption, particularly in the wider economy. You could own a fridge at home or a laptop, or have a full suite of modern appliances in your home, but if you’re still living and working in an economy where the average person is not consuming 700 or even 2000 kW hours per person, then you’re living and working in an economy where energy is a constraint on job creation, on productivity, on turning people’s ideas into businesses. So we hope we can get to a point where lousy electricity or costly electricity is no longer a constraint. In the US, for example, when starting a business, it wouldn’t occur to you that electricity is something you’d need to worry about, or the price of it. You just know you’re going to get affordable, reliable electricity to power your business. If you were starting the same business in Ghana, that might be something you’d have to worry about and also think about options for back-up if the power went out. This is a massive constraint and does not get captured by asset ownership.

The real benefit of the Minimum is not that this is the perfect measure of how much electricity a person needs to live a modern life. But it starts to put all people on a closer footing to the realities that people in the rich world live with now. From that perspective 1000 kW is still very, very low. But it’s still better than what we’re doing now. So the idea is, how do we take that ambition and get that into the international goals that we use? There’s two phases to this.

For one, it takes a little while to socialise the idea of a new metric. So in the short term engaging with agencies like the International Energy Agency (IEA), the World Bank, and a set of countries that are also looking for that next measurement step helps in getting the idea accepted. Secondly, with 2030 just around the corner, we might soon start to have conversations about sustainable development goals for 2040 or 2050, and that’s where these new measures like the Minimum can set the tone for what those goals could be. This is all a process, and it won’t happen overnight, but we do need to get the entire global community to raise the bar on what we’re trying to achieve for everyone on the planet.

The Modern Energy Minimum is not a replacement for the existing basic access rates that are currently available, but rather, a compliment to them. It’s the next step. While we want to get everyone to step one, what the Minimum is proposing is step two.

Learn more about the Energy for Growth Hub at energyforgrowth.org where you can also download the full Modern Energy Minimum.