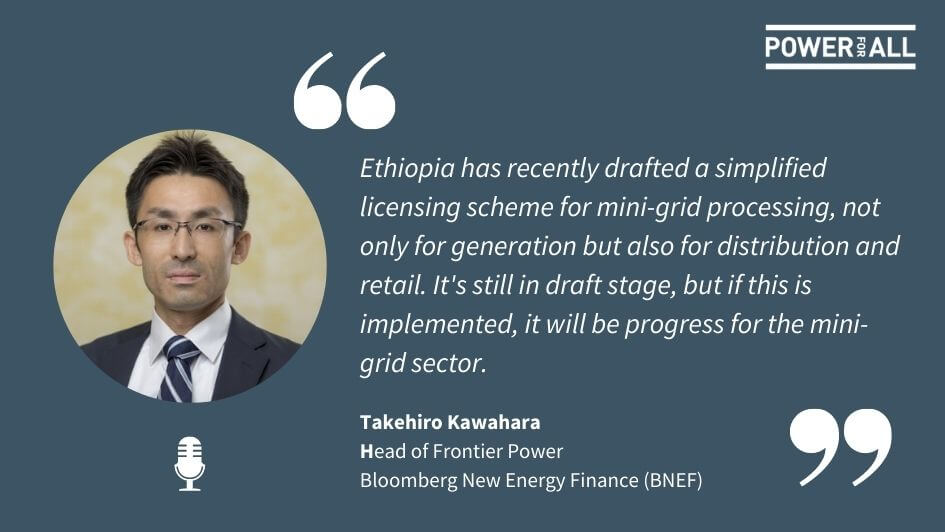 Power for All · Interview with Takehiro Kawahara: Energy Access Sector Trends for 2021

In this episode, Power for All’s William Brent speaks with Takehiro Kawahara of Bloomberg New Energy Finance, discussing developments in the energy access sector that we should be watching in 2021. Here’s an overview of what he had to say:

Changing energy of the sector

One of the biggest changes in the last couple of years is the engagement by large corporates which we will see more of in 2021. The corporations Take refers to are broadly three types of companies: the European utilities, the European oil majors, and the Japanese trading houses and investors. These companies’ initial participation in the sector was as strategic investors. But now, their presence is much bigger -- especially in the African continent, and in some Asian countries -- along with a diversification of their strategies. They’re not just investing in the sector any more, but they’re also getting involved as one of the main players, offering more comprehensive energy access services to off-grid communities, who have different levels of demand. This goes beyond electricity to providing other utility services such as cooking, internet, water, in partnership with other companies. This is an interesting trend that we will see more of, especially for rural communities in Sub-Saharan Africa and Asia.

There are also a few examples of local companies emerging, but it’s too early for such companies to grow by acquiring others at this time. But it’s possible in a few years’ time we could see a consolidation of the industry because of similar businesses operating in the same geographical space. Consolidation will accelerate, as well as greater diversification from corporates. There are already numerous companies, but scale will be important. Eventually, we will see some of the established companies continue to grow their businesses while competitors may exit the market or be acquired. One of the reasons is that financing for energy access companies is concentrated towards a limited number of companies now as compared to two or three years ago.

Innovation in the market

Another trend is the changes in the C&I solar space. Two years ago, we focused on Kenya, Nigeria and Ghana because we saw the emergence of off-grid businesses, but didn’t see much expansion on solar for C&I. But now that has changed. There has been significant market expansion on solar for C&I consumers in Sub-Saharan Africa in the last decade, as well as diversification of customers. The market is starting to mature, for example, the emergence of manufacturing and horticulture companies in Kenya, some of whom have installed on-site solar in order to cut their energy costs and at the same time access reliable power. More consumers are now aware of the benefit of a solar farm for cheaper accessibility, including for things like WiFi access. There’s also more consumers using solar for telecommunication towers, and also in the agriculture and food sectors. It’s not only just on-site solar, but also pay-as-you-go for C&I customers.

Solar for health is another big thing, especially related to the ongoing COVID crisis. There are more than 98,000 health care facilities in Sub-Saharan Africa and only 28 percent of these facilities have access to reliable electricity, and COVID has revealed that access is crucial for health care. It’s possible that now many governments will prioritize using clean energy for health facilities to access reliable electricity. One such example we’re already seeing in Nigeria where the Rural Electrification Agency has implemented several hybrid systems for health care facilities across the country and are planning to expand this up to 400 facilities. Other governments may also follow, and this will need the support from the international agencies and development banks because of the risk and urgency of responding to this health care crisis. Another trend related to health care is the emergence of new services like e-healthcare, medical devices powered by solar, diagnostic facilities for blood testing and x-rays using solar.

Countries to watch out for

Being the most populous country in Sub-Saharan Africa, and also being at the forefront of the energy access space, we definitely need to pay attention to Nigeria, especially in terms of policy implementations. The government has introduced two results-based financing programs. One is the performance-based grant and the other is minimum subsidy tends for solar hybrid mini-grids. This has gained a lot of traction from investors and developers. Part of the reason is that the country already has a robust regulatory system in place. We hope to see more market expansion in Nigeria, which is a good sign for job creation and for companies who are targeting the Nigerian market. In turn, the hope is other governments in the region will learn from Nigeria and replicate these policies. So Nigeria is definitely a critical market for the sector.

Ethiopia is also interesting because the government has recently drafted a simplified licencing scheme for mini-grid processing, not only for generation, but also for distribution and retail. This is significant because it means there will be a single licence process for the entire value chain. This simplification is important for developers and investors. Because usually acquiring a license can take a while, it increases the overall cost of the project. This is still in draft stage, but when implemented, this will be a gamechanger for the mini-grid sector.

Tanzania was a country where the hybrid mini-grid market emerged earlier than other countries, but under the current administration, there has been a fair amount of pushback against decentralized renewables. So while they have robust regulations, at least on paper, the government is now prioritizing grid extension and hydro generation, rather than decentralized energy. There is a lot of negotiation between the state utility and other providers, where the state sometimes wants to reduce tariffs below what is set by the regulation, which makes the private providers anxious. We haven’t seen any signs that this is going to change in the immediate future, but this is a market that is causing much anxiety for the sector. It will be interesting to see how this plays out.

In Asia, Myanmar and the Philippines have caught the attention of companies providing mini-grid power. In Myanmar, one company has installed 250 mini-grids using telecommunication towers as their anchor client, which is a similar model that India has used in the past. The Philippines has also made significant progress in terms of installing hybrid mini-grids. The country has many remote islands that are not connected to the main grid, so decentralized solutions will be critical to provide them with access because building transmission grids from the main islands will be prohibitively expensive. In the absence of this, many use diesel or other fuels, but there is a strong political will to promote renewable energy via mini or micro-grids. A policy was drafted a year ago, and is unclear in terms of the timelines, but if implemented, the policy is designed to add more transparency towards integrated development and investment.