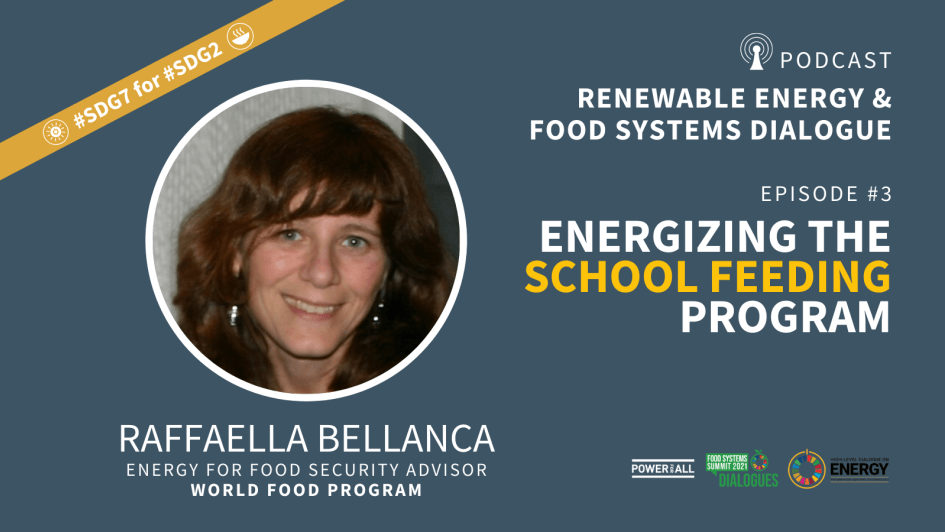 Power for All · Energizing the School Feeding Program: Interview with Raffaella Bellanca of the World Food Program

In this interview, William Brent speaks to Raffaella Bellanca, leader in access to energy at the World Food Program (WFP), discussing a critical link between school feeding initiatives and decentralised renewable energy. In support of this year’s UN Food Systems Summit, this podcast is part of a special series focused on the critical link between food systems and decentralized renewable energy, aimed at highlighting game-changing ideas in Africa and Asia that can help ensure sustainable energy for all and improve farmers’ lives

WFP has been working extensively with several stakeholders to understand the link between the school feeding programmes and decentralised renewable energy sources to help create a sustainable model which benefits local small-holder farmers, improved quality of food through electrification, and economic growth. As of 2019, the programme provides nutritional lunches and snacks to over 70 million children across 59 countries directly. Additionally, the WFP also works with capacity-building of governments to provide school lunches within their countries.

Since many of these schools are located in remote, decentralised areas, it becomes necessary to set up energy systems for purposes such as lighting, clean cooking, water pumping, along with digital literacy. WFP is looking at the school lunches programme as an entry point for many energy activities within the community. Many of them still use traditional cooking methods instead of clean cooking technologies. This can lead to many health and environmental issues, and increased cooking times. Thus, solar mini grids are being considered as a renewable energy source for these schools.

In many of these regions, it is difficult to attract operators of solar mini grids and standalone energy systems without making it economically viable for them. Moreover, the system must not break down after initial usage, and must be financially reasonable, even for governments to invest in them. WFP has come up with the idea of providing vouchers and other such incentives to schools to raise energy usage and boost the demand. The focus is on enabling the school to pay an operational fee and ensure that the investment is profitable for the private operators as well. Maintaining a market-based model would prove most beneficial because of the various components involved in energy production. Alternate options such as clean cooking carbon accreditations can be used as smart subsidies by governments. Additionally, monitoring of operations and usage of grid-based technology can easily be integrated into WFP school lunch distribution systems.

Another programme by WFP includes working with small-holder farmers to source locally grown food ingredients for the school lunches. Combining these two programmes to create a model of locally grown food to schools could encourage local farmers, boost economic growth and take care of nutritional needs of the children as well. To tackle impediments such as quality and quantity of food,  energy intervention would then be required in production, processing and preservation of the food.

Since modern and clean cooking methods are relatively new in many of the regions and communities, the process of promoting the need for energy is an uphill task. A pilot project is being conducted by WFP in Armenia, in testing the home-grown, locally sourced school lunches model. With more data from this project, the model can be scaled to a global level focussing initially on urban and peri-urban areas. Collaborations with governments in investing and implementing such models is also being considered.

By implementing such a model, we can strengthen the school feeding programme, encourage small-holder farmers, while also bringing in decentralised renewable energy electrification systems. This not only fortifies the food system but also elevates the communities’ economic and ecological standing.

Podcast Addict
See Also
Interview with Magda Moner & Sandor Szabo: Affordability of PV based electricity generation on rural electrification On the Road to Ending Energy Poverty: Six years of Power for All Solar as a Crop: Making the water-energy-food nexus profitable for smallholder farmers in India Interview with Todd Moss: Increasing Energy Access Ambition for Global Development Investing in Scale: The opportunity at the nexus of food and energy