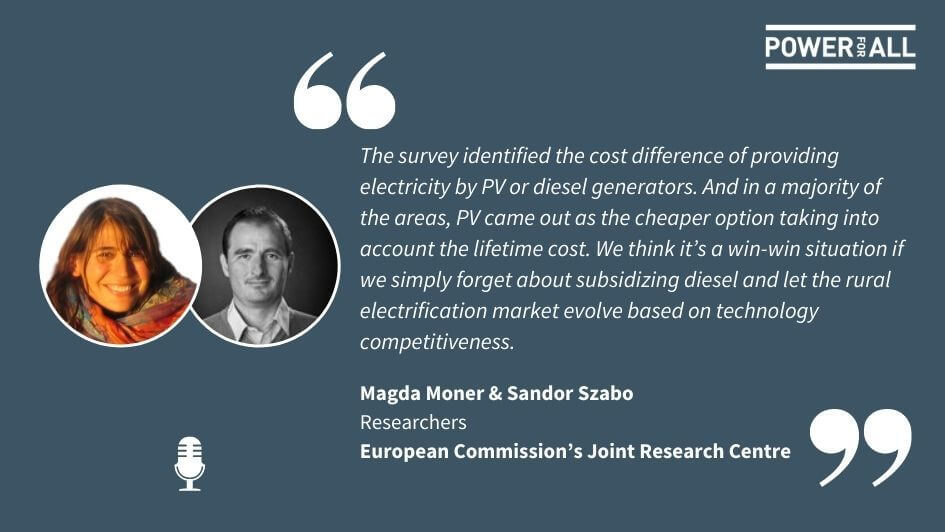 In this episode, William Brent speaks with Magda Moner and Sandor Szabo, leading researchers in rural development and renewable energy at the European Commission’s Joint Research Centre and co authors of the research paper Mapping of Affordability Levels for Photovoltaic (PV) Based Electricity Generation in the Solar Belt of Sub-Saharan Africa, East Asia, and South Asia. They shed some light on the impact of their research on affordability of solar PV grids in rural electrification and why it is a more sustainable option.

In the context of governments and donors realising the rising cost of solar grids in electrification and issues of affordability, Magda Moner dives into how their research focuses on identifying communities, whom she refers to as “low hanging fruit”, who could benefit from the lower costs of PV grids in the Sub-Saharan African, East-Asian and South-Asian regions.  Rather than a generic cross-country mapping of costs comparing the affordability of PV grids to widely used diesel generators, their research reveals which regions, or more specifically, which communities would find the PV grids a cheaper, more sustainable option. National electrification models are often shortsighted in the sense that they focus heavily on reducing initial setup costs and overlook optimal results, health and environmental concerns and operational costs. In these regions, if the setup costs are covered by a national institution, or donors and investors, the community may be able to pay for the PV grids, and manage operational costs themselves. Operational costs generally include changing the battery of the grid every five years, acrss a 20-year lifetime period of the grid.

A lot of the decision-making regarding this, depended on the volatility of prices of diesel and PV grids. Some countries, especially in the African region subsidised diesel as part of their social policy initiatives. This more often-than-not is counterproductive to building energy efficient, sustainable electrification. It prevents the people from using the low-operation cost PV grid, which also proves to be more user-friendly.

Keeping these parameters in mind, and a survey of base-by-base cost differential between the competitive alternatives shows that the PV grid is cheaper in one-third of the total regions surveyed. Moreover, these areas are predominantly cut-off, or away from urban centres and centralised grids. The research allows for a region-based understanding of how much cheaper the PV grid system is, over the diesel generator system in price values. The PV grid system has reduced the cost of electrification ten-fold in the European region and this further drives the need to implement them in communities that cannot afford huge operational costs.

Access to electrification does not just mean affordability, but also the allied services that each system provides to the community. Further research in this area is being conducted to define different tiers of services that a rural electrification site should provide. Alongside this, parameters such as social and political conditions, economic stability, quality of services are also to be included in calculating the cost and impact of the different systems of electrification. This integration of parameters proves useful in attracting investors, NGOs and international organisations to back the PV mini grid system. Setting up a platform in which anyone can obtain data on social parameters and available infrastructure by clicking on a certain location is also being initiated in cooperation with various stakeholders. Such data can be easily streamlined into actionable policy frameworks and investment decisions by governments.

Podcast Addict
See Also
Interview with Raffaella Bellanca of the World Food Program: Energizing the School Feeding Program On the Road to Ending Energy Poverty: Six years of Power for All Solar as a Crop: Making the water-energy-food nexus profitable for smallholder farmers in India Interview with Todd Moss: Increasing Energy Access Ambition for Global Development Investing in Scale: The opportunity at the nexus of food and energy