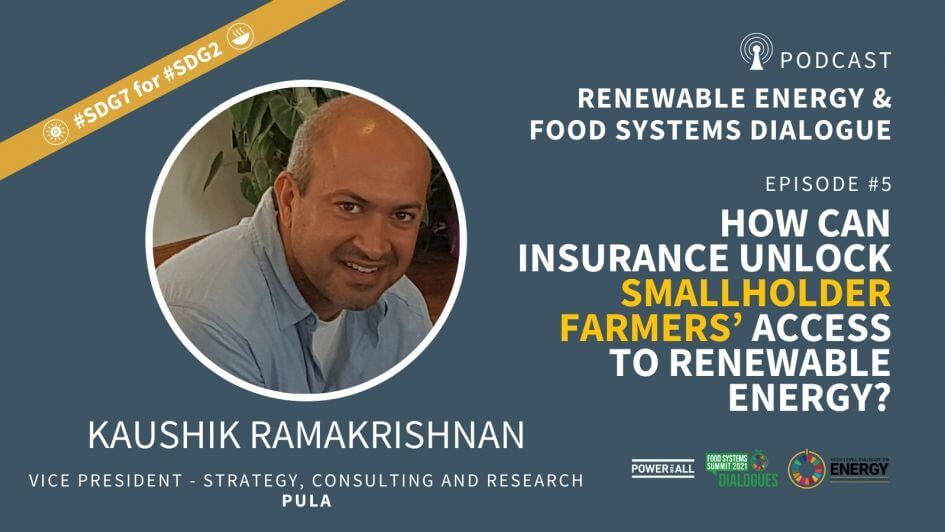 Power for All · How can insurance unlock smallholder farmers’ access to renewable energy?

In this episode of the Power for All podcast, William Brent speaks with Kaushik Ramakrishnan, an expert working to transform and scale smallholder farming through innovative financial solutions. In support of this year’s UN Food Systems Summit, this podcast is part of a special series focused on the critical link between food systems and decentralized renewable energy, aimed at highlighting game-changing ideas in Africa and Asia that can help ensure sustainable energy for all and improve farmers’ lives.

A recent report published by PULA explores bundling crop insurance with solar assets provided on credit to both businesses and customers. Set against the backdrop of off-grid renewable energy solutions in rural communities of Africa and Asia, predominantly small-holder farming communities, Kaushik explains how the traditional pre-financing of the solar equipment by a private company may expose them to various risks. Since farmers pay the cost of the equipment in installments over time, there could be risks that could affect their payments as well. Climate change, systemic issues, pests and diseases are some risks that farmers do not have the power to mitigate or control.

Since farmers are the largest base for many of the pay-as-you-go solar companies, they constitute almost 40% of the defaulters of these companies too. The most common reason this happens is crop failure or failure to produce the amount of yield that is expected. With the index-based insurance solution proposed by PULA, which works on the model of insuring farmers in a group and calculating losses based on whether the yield has reached a certain expected number or not. The insurance product, known as the yield index-based insurance, is connected with the actual yield of the farmer. For instance, if a farmer’s average yield is a certain number, the insurer would set a certain quantity below that as a marker, below which if the yield falls, the farmer would receive a payout to bridge the gap between the income he would’ve received if he had reached his actual yield.

This product achieves a broader coverage as it measures final resulting yields. The harvest measurement is done through enumerators who go out to the fields and use a method known as crop-cut measurements. This insurance product has worked in several African markets, and when bundled with off-grid solar equipment and solar companies, it could cover a wider range of issues.

Linked with existing pre-financing credit schemes in different countries, PULA has offered its yield index-based insurance in about 11 African countries, spanning 4 and a half million farmers. The credit schemes in itself have improved their access to capital. But when bundled with the insurance, it has helped  farmers invest between 15 to 20% more in their farms, and realize 50 to 60% higher output from their farms. Over the long term, they could increase their household savings by 250% over what they got before they joined this whole program. This significantly improves their ability to access innovative energy solutions.

For a good picture of the impact, there are two metrics that need to be looked at. From a business perspective, the amount of premium generated from the insurance products is necessary because it goes towards the coverage. In terms of the market, it is necessary to look at the amount of risk that has been taken away from farmers and placed in the hands of the insurers. PULA has managed to de-risk the agriculture sector worth $600 million with all their insurance products.

There are three market segments or stages that the off-grid insurers can tap into. The first is the ‘line of sight’ segment that involves offering insurance products along with government credit schemes, civil society organisations, agencies and departments of the government and others such. This market has already been tapped into worth $200 million by PULA and its peers. The second segment known as the ‘round the corner’ segment which involves going a little further than the first, tapping into the supply chain through PPP, and several other channels to access this market, could be worth almost a billion dollars. The third segment is that which remains untapped around the world. Going by the figure that there are 500 million smallholder farmers, even capturing 20% of them would create a huge market for such insurance products, along with the right models.

With PULA, their products still remain focussed on smallholder farmers, with a mission to unlock the potential of  smallholder farming by de-risking them and enabling access to capital. They also work with various institutions such as co-operatives, banks to de-risk both the farmer as an individual and the aggregate entity. Many of the risks associated with mini grids and solar products are similar to risks in agricultural value chains, especially climate-related risks. For instance, a hydro-energy powered grid faces risk of inadequate rainfall, or a solar-powered grid could be risky if the skies are overcast for most part of the year. So, it is important to note if the same knowledge of pricing risks for agricultural value chains transfers to renewable energy products as well.