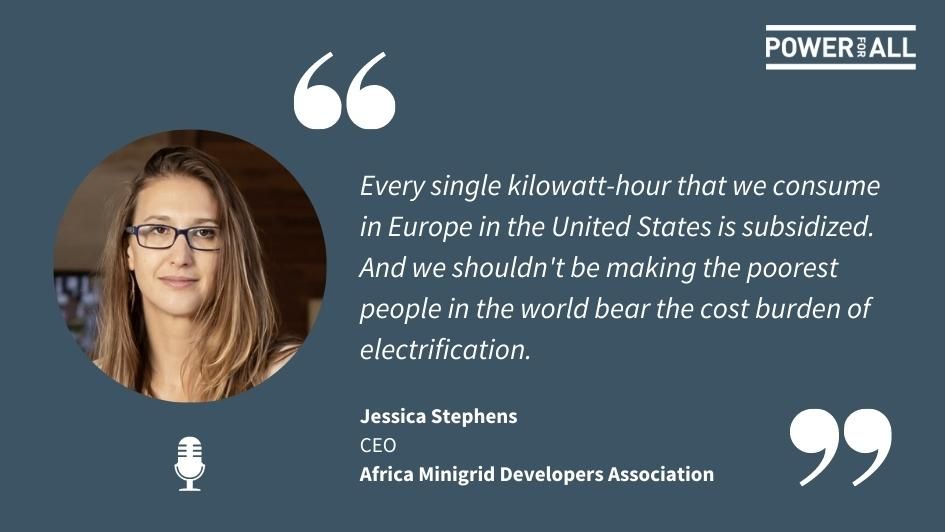 Power for All · AMDA Benchmarking Report: Interview with Jessica Stephen

In this Power for All podcast, Jessica Stephens, the CEO of Africa Minigrid Developers Association (AMDA), in conversation with Power for All CEO Kristina Skierka, reflects on the recently released ‘Benchmarking Africa’s Minigrids report.’ This is a flagship report of AMDA, an industry association created by mini-grid developers to boost the health of the sector and deliver on global renewable energy access objectives.

Jessica said the report had been able to track year-on-year consumption and revenue trends for a large plethora of minigrid sites within the African continent to gain insights into the consumption patterns and energy utilization by rural consumers and the performance of the sector in the last two years.

The AMDA CEO said the data on one side painted a positive picture of the performance of the mini-grid sector in the last two years, including a doubling in the number of people connected to electricity and a 40 percent increase in the number of operational minigrids.

She added that the communities are also starting to increase their power consumption over time. This created a pathway to the sustainability of the infrastructure and served as an indicator for the increasing economic viability of the mini-grid sector.

“The longer people are connected to power, the more their energy consumption increases and the better the revenue for the mini-grids,” she said.

She also outlined some of the not-so-positive findings of the report, which include broken financial pledges. For example, she pointed out that from a $1.6 billion pledge to the sector in 2014 only a fraction of that money, 13 percent, has been received.

She, therefore, says the sector needs increased support from governments, development partners and the private sector for it to thrive and play its part in ending energy poverty in Africa.

Listen for more of what AMDA’s benchmarking report revealed.