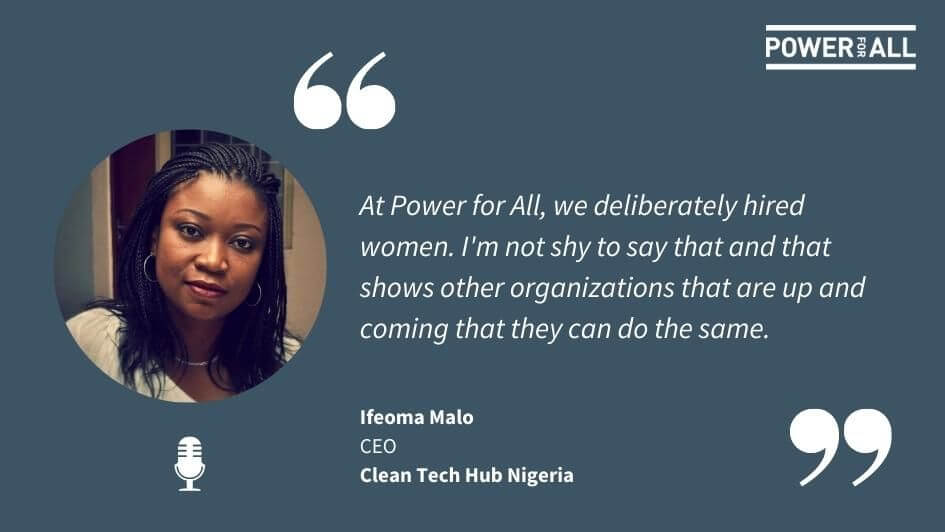 Interview with Ifeoma Malo on Power for All’s Seventh Anniversary

Power for All’s CEO, Kristina Skierka, refers to  Ifeoma Malo (affectionately referred to as Ify)  as part of   “Power for All OG” and that was one of the main reasons she was perfect for an episode reflecting on the organization’s seventh anniversary. Ify was part of Power for All’s infancy as a country manager based in Nigeria back in 2016.

She has since gone on to become a game-changer in the renewable energy sector and is now the leader of CleanTech Hub in Nigeria. This is a pioneering hybrid hub for the research, development, demonstration, and incubation of clean and green ideas and technologies in Africa and their validation for commercial-stage development.

One of the first reflections Ify shared was the fast-paced environment she experienced when she started at Power for All. She jokingly said large amounts of coffee were her survival tactic. Ify said she appreciated the amount of power, independence, and trust given to her as country manager to shape energy access conversations and projects. She said Power for All formed part of her new chapter when she co-founded CleanTech Hub.

A lawyer by training, Ify said she joined energy access advocacy to quell myths that one needed to be an engineer to make an impact in the sector. She also credited Power for All for being the one place that made her even more conscious about women's empowerment in the sector. She said Power for All was not only preaching inclusivity but was also practicing it so people could see the faces of women driving the organization.

Ify added her gratitude to Kristina for her leadership, which carried Power for All to its seventh anniversary. She also acknowledged that while Power for All is a relatively small organization, it has significantly impacted the sector since its formation in 2015.