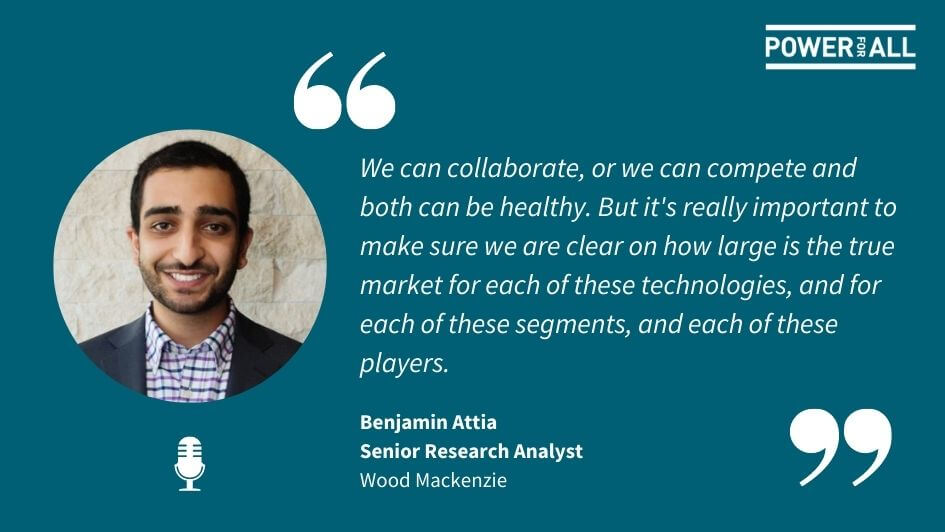 Power for All · Interview with Ben Attia: Energy Access Sector Trends for 2021

In this episode, Power for All’s William Brent speaks with Benjamin Attia, senior research analyst at Wood Mackenzie about his take on energy access sector trends for 2021. Here are some of the takeaways from what he had to say.

An unfortunate and sovereign reality is that there will be some ‘backwards progress’ in the achievement towards SDG7 and universal access. Reports from IEA estimate about 13 million people will lose access to electricity services and up to 100 million people who already had electricity connections will be unable to afford them due to the rise in poverty levels worldwide as a result of COVID. This is a big setback for the sector. Smaller companies with less capital have faced some pretty serious challenges

However, Ben also acknowledged that the industry has shown wonderful resilience despite the situation, and several enterprises have been working hard to keep the lights on, putting customers and their needs first. Critical response efforts, like powering health care facilities, providing access to public information and awareness campaigns, investors who have stepped up in a time of crisis, along with some rise in demand and payment from customers that has resulted in some companies being able to witness steady growth, have been positive developments in the midst of a hard year.

In 2021, we might see some recovery, but it will be uneven owing to the differences in the markets. Foreign-owned companies are in a better position as the economic consequences of COVID had some pretty significant impacts on currency markets in a lot of places. There will be some new market opportunities, but also a rebound in consumer demand and willingness and ability to pay. We should hope to see a lot of public sector support programs that will pick up steam, packaged with broader public sector recovery efforts, along with an uptick in investment.

C&I segment as a ‘gateway drug’ for investors

Another development that is exciting to look forward to is the way the investment community has now pivoted to include the C&I segment into the energy access conversation. While there might be debate on whether this counts as ‘energy access’, Ben has observed that the same investors who were previously interested in solar home systems graduated to mini-grids, and now a lot of them have graduated from mini-grids to C&I. From the investors perspective, many are interested in off-grid renewables, but don’t necessarily understand the technology resulting in less comfort in making such investments. But by bringing in the captive economics of C&I for larger scale firms and SMEs, has opened up the opportunity for investors to enter this space. Part of the reason is the similarities between mini-grids and rooftop solar in terms of technology and ticket-size in some cases, along with interesting business model innovations that look quite different from the traditional net-metered or even feed-in tariffs. It’s possible that once these investors get their feet wet, they might be willing to move on to mini-grids and other technologies, so in some sense, we might start to see C&I as a gateway drug into some of the lower tier consumption, more remote, more basic pyramid customers. If we start to consider C&I solutions as solving part of the energy access problem, we’re not just looking at residential households, but also access for businesses, which is, of course, going to power economic growth.

The third trend Ben speaks about is the inevitable off-grid and grid worlds colliding on the ground, rather than just on paper. And what that pushes us to think about is the changing role of the public utility and what that means for the future of grid extension. There are a lot of moving pieces that are interconnected. The two worlds can either collaborate or they can compete, and whole both can be healthy, it is important to make sure we are clear on how large the true market is for each of these technologies, and for each of these segments, and each of these players because if we make some assumptions that are wrong, that could lead to unfortunate outcomes for both sides. The investors will flee, the utilities will see their most bankable customers defect from the grid, or cease to pay entirely.

However, using integrated planning using new tools available could have a lot of cascading effects that everyone would benefit from. He predicts that we will start to see some really great examples of public utilities that are in dire straits that welcome some competition in a way that improves the financials and services of both sectors through integrated planning and future grid technologies like digitization, grid extension, and some cost reductions on the generation and transmission and distribution sides. But in most cases, the costs will actually pick up over time.

He also adds that integrated planning is only as good as the data it’s based on. With quality granular data from the supply and demand side to map the market will completely change the game not just for integrated planning, but also for company strategy for a lot of SHS and mini-grid enterprises that are currently relying on pretty anecdotal information when they enter new countries or new states.