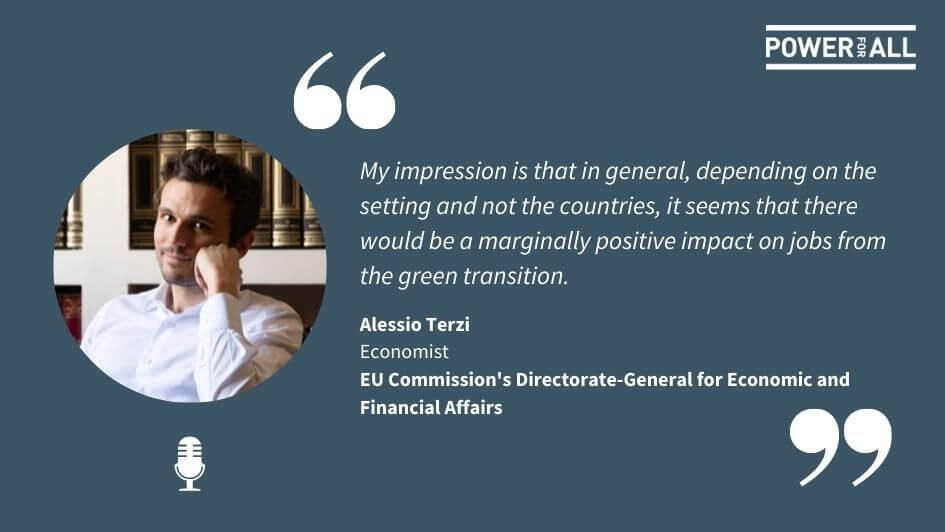 Interview with Alessio Terzi, Author of Growth for Good: Reshaping Capitalism to Save Humanity from Climate Catastrophe.

Power for All · Reshaping Capitalism to Save Humanity from Climate Catastrophe: Interview with Alessio Terzi

In this  episode, Power for All’s Director of Research, Carolina Pan, speaks to Alessio Terzi who is an Economist at the European Commission's Directorate-General for Economic and Financial Affairs. Alessio is also the author of a book titled, Growth for Good: Reshaping Capitalism to Save Humanity from Climate Catastrophe.

Alessio tells Carolina that his book was inspired by the fact that we are living at a  time where climate change is becoming more and more prominent and addressing it is becoming more of a priority. He added that the tipping point that called for the book was the global pandemic that rocked the world in 2020.

“In that setting, when everything was going wrong, where the economy was collapsing, consumption was shrinking, GDP was shrinking, people started looking for silver linings. The only silver lining that could be seen was the fact that environmental indicators were improving and carbon emissions were dropping, air quality was improving, and so on. It sparked a reflection for me on what is the relationship between the economy or economic growth and nature,” Alessio said.

He said his book raises crucial questions including a sense of direction as a society. He said it was important to closely track the long-term pledges and plans to reach climate neutrality by 2050. He commends the EU, the UK, Japan, and South Korea among others who have done well.

On job creation, he argues that renewables will create jobs only if countries make sure that they catch “the green train” or “the green Industrial Revolution”. He said countries that do nothing also risk job losses if there is no development of the new industries in the green sectors.

“My impression is that in general, depending on the setting and not the countries,  it seems that there would be a marginally positive impact on jobs from the green transition,” he added.

He said the book wasn’t necessarily written with economists in mind but it was a book that tries to explain many concepts to help people better understand their surroundings. He said it was a journey for him too, in which he was trying to understand capitalism and economic growth.