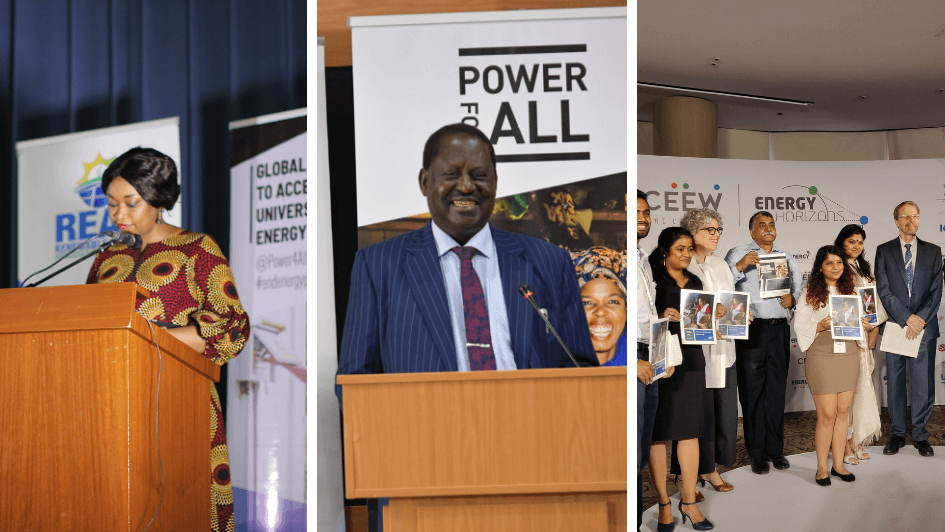 Power for All and its partners officially launched Powering Jobs Census 2019: the Energy Access Workforce, the first annual survey measuring employment from decentralized renewables for rural electrification in Africa and Asia. National roundtables were held in the capitals of Nigeria, Kenya and India, attracting about 300 high-level stakeholders representing government, private sector, industry associations, civil society, academia, UN agencies, entrepreneurs and the general public. Participants came from various sectors, including energy, labor, youth, gender, innovation and rural development. The roundtables highlighted the census research findings, with a main goal of strengthening capacity and creating understanding towards a consensus on emerging key issues in decentralized renewable energy (DRE) sector among sectoral experts, development partners including stakeholders from the public and private sector.

Speaking to 140 attendees in Abuja, including ambassadors and a representative from the office of the Nigerian Vice President, Renewable Energy Association of Nigeria (REAN) Executive Secretary Lande Abudu noted that “between 2017 and 2018, 4,000 jobs were created in the renewable energy sector in Nigeria with many of our members contributing to this figure. We welcome the results of the jobs census as it gives us data on the potential for job creation in the DRE sector. With our partnership with Power for All’s Powering Jobs Initiative, the Renewable Energy Association of Nigeria is showing commitment to meeting the targets of 52,000 jobs estimated as needed by the census to deliver 405MW by 2023 and to playing an active role that will create jobs in the formal and informal sector".

In Kenya, the event was keynoted by the African Union High Representative for Infrastructure Development and former Prime Minister of Kenya, H.E Raila Odinga. With at least 80 guests gathered at Strathmore University, discussions focused on raising awareness, interest and support for the DRE sector, along with technical and vocational education and training (TVETs) as well as job creation through deployment of DRE technologies in Kenya and Africa as a continent.

H.E Raila Odinga noted that as highlighted by Power for All’s report findings, Kenya had laid out several electrification programs that would finance grid extension, intensification and densification (including mini-grids) and the deployment of DRE solutions where the national grid could not reach, including the current Kenya Off-Grid Solar Access Project (KOSAP), a flagship project of the Ministry of Energy, financed by the World Bank.

“In many rural areas in this country and across Africa, the high unemployment is linked to the mismatch between available work and available skills. There is work but no skills. Closing this gap with skills and jobs training is critical especially with regard to renewable energy sector. We cannot achieve energy for all without a labor force to support it,” his excellency said.

In New Delhi, in partnership with Skill Council for Green Jobs (SCGJ), and Natural Resources Defense Council (NRDC), the launch was part of Energy Horizons, a pre-eminent platform hosted by our research partner Council for Energy, Environment and Water (CEEW), where the world's best minds discussed, debated, and examined solutions to enable the global energy transition. The roundtable, Renewables for SDGs: Jobs, Gender, and Sustainable Economies, was attended by 65 experts and aimed at identifying barriers to growing the energy access workforce, and opportunities for collaboration to remove those barriers and as a result create better livelihoods for rural Indians, especially for women and youth.

Speaking during the launch, Rana Adib, the Executive Secretary of Renewable Energy Policy Network for the 21st Century (REN21), noted that India had a unique opportunity in showing the way on how to develop renewables skills, and particularly for women.

“Renewable energy isn’t just a sector to hire women; women are an opportunity for the energy transition, from technical to management positions, their role will be instrumental in enabling the transition,” she said.