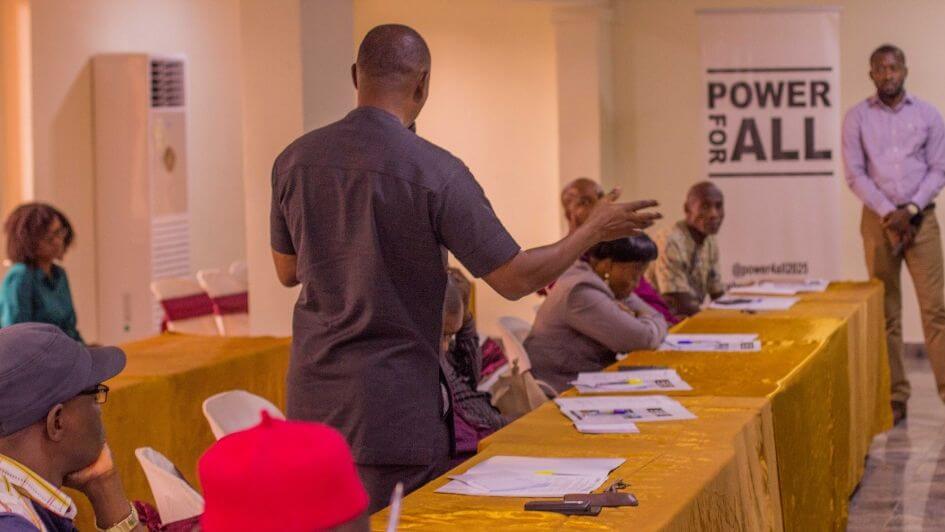 In December 2018, Power for All concluded on the year-long Scaling Off-Grid Energy project which it co-implemented with FHI360 funded by the United States Agency for International Development (USAID) and Power Africa. The project objective was to reduce the number of un-electrified people in Nigeria by increasing their access to modern, clean and affordable electricity through decentralized renewable energy (DRE) solutions.

One of the project pillars was training policymakers at state and regional levels on ways  DRE solutions can accelerate electrification rates within their domains and how they can attract investment into DRE in their states and regions. This was critical to achieving project goals as states are constitutionally empowered to legislate as well as execute energy projects in their domains.

The training workshops tagged DRE101/X-Learning Workshops were held in eight states across five regions of the country and were attracted close to 400 policymakers from 18 state governments.. These workshops increased awareness level to policymakers regarding DRE solutions and increased their options on access to electricity in their states.

Multiple outcomes were derived from the workshops which included plans for states to set up regional taskforces to facilitate DRE in their domains, research on how some states can share power generated especially through decentralized energy, and states pledged to adopt DRE policies and plans. Other outcomes also included collaborating with neighbouring states to set up industrial hubs for assembly of DRE components and numerous exploratory discussions with developers on DRE investments and projects in their domains.

To assess the level of progress achieved since the start of the workshops, Power for All and FHI360 facilitated follow-up workshops in Enugu and Kano States. Both states had hosted the DRE101/X-Learning workshops for the South-East and North-West regions in March and July 2018 respectively. These follow-up workshops were important in order to assess the growth of the DRE market in both states, ascertain DRE-specific policies and plans adoptedand identify areas of challenge in order to design policy support.Participants included policymakers drawn from across the state civil services, grid distribution companies and private DRE companies, who were all at last year’s workshops.

All participants cited noticing increased adoption of DRE solutions by homes and businesses in their states, ranging from solar home systems to solar stand-alone systems. While Kano State had a mini-grid installed at a market under the Nigerian Rural Electrification Agency’s Energizing Economies Program, communities in Enugu State are yet to benefit from mini-grid power. Although both states have about 70% electrification rates, there is still a large population of unserved and underserved consumers whose needs can be met using DRE solutions.

These challenges were amongst the barriers to increased adoption of DRE solutions in the country that were being addressed by the DRE Taskforce, which was made up of stakeholders drawn from the private sector, government, donor agencies, civil society organizations, trade associations, and investors. The taskforce had focused on five focal areas: (1) zero duties and tariffs for the sector, (2) collaborative data sharing, (3) consumer awareness, (4) end-user payments and (5) support for standardization of equipment and components.

The challenge of limited local human capacity is an oft-expressed concern in the sector and has led Power for All to launch a new campaign called Powering Jobs, which is aimed at catalyzing policy action for developing human capital for the DRE sector. The campaign which is being rolled out in Nigeria, Kenya, and India has conducted a job census in each of these countries which identifies current and future skills demand in the sector.

Another challenge remains the absence of DRE-specific policies and plans by the states in order to drive investments and increase adoption of DRE solutions, as investors are left to rely on federal level policies such the National Renewable Energy and Energy Efficiency Policy (NREEEP), the National Renewable Energy Action Plan (NREAP), the Rural Electrification Strategic Implementation Plan (RESIP) and the Mini-Grids Regulations.

As states are constitutionally empowered to legislate and execute projects on power, there is a need to continue engaging with policymakers to enable them to develop DRE-specific policies, plans, and incentives in order to attract DRE investments into their states. This particularly increases the options of these governments for increasing rural electrification beyond traditional grid extension which is not only more expensive, but is also the purview of the grid distribution companies (DISCOs).

A clear takeaway from these follow-up workshops is the fact that the enthusiasm of the policymakers remains very high and their willingness to continue to partner with Power for All and its partners in attracting DRE investors to their states.

We believe with concerted actions and more collaboration, energy poverty in these states and across the country can be eliminated and there will be a huge increase in access to electricity from DRE solutions.