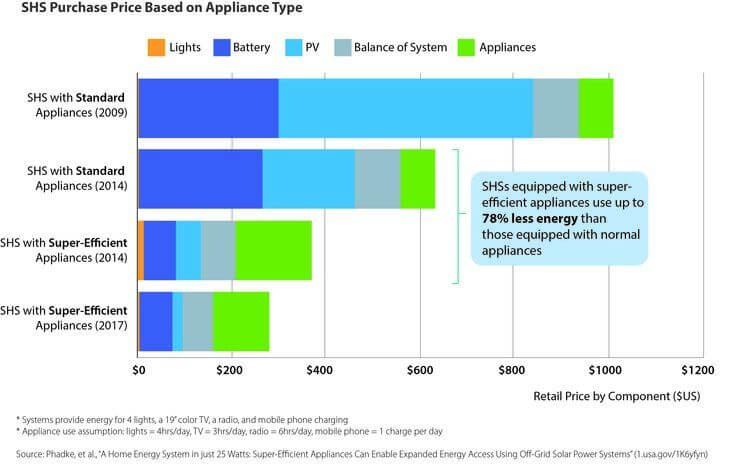 Solar Homes Systems (SHS) with super efficient appliances use up to 78% less energy than normal appliances.

The 1.4 billion domestic refrigerators and freezers in use worldwide each consume an average annual 450 kWh of electricity, accounting for almost 14 percent of total household electricity consumption. As we work to end energy poverty for 1.1 billion people worldwide, those numbers are sure to rise.

Or are they? What if the next generation of household refrigerators - instead of being the energy-intensive AC models used in the West, are actually ultra-efficient appliances running on DC? That paradigm shift is what the Scaling Off-Grid Energy: Grand Challenge for Development and Global LEAP hope to achieve with the launch today of a $600,000 contest to find the most efficient, lowest-cost and highest-demand refrigeration technologies in the world.

Incentive for addressing the problem is not just tied to climate and poverty reduction. By 2020, the off-grid refrigerator market could see 38 percent year-over-year growth and total annual spending approaching $1.1 billion, according to a recent analysis by the Global LEAP Awards, which is the host and administrator of the Off-Grid Refrigeration Competition.

Connecting the energy poor to electricity is just a first step. Equally important is giving them the ability to do something with that power, hence the focus on energy efficient appliances. Refrigeration can enable income-generating activities (setting up a stand to sell cold beverages, for example), as well as prolong the nutritional value of food, diversify diets, and reduce the time that households spend shopping or gathering food.

Applications for the Off-Grid Refrigeration Competition will be accepted beginning September 21, 2016 through January 20, 2017. Proposals can be submitted at www.globalleap.org.

Scaling Off-Grid Energy is a partnership that includes Power Africa, USAID, the UK Department for International Development (DfID) and the Shell Foundation.