Decentralized solar is on fire in India

Small and rooftop solar is the fastest growing clean energy sector in India, with a blistering 92 percent compound annual growth rate over the past four years, according to a report from Bloomberg New Energy Finance (BNEF) released today. The segment will continue to see high growth rates, given ambitious government targets (40GW of rooftop solar by 2020), specific rooftop solar policy in most states including net-metering, new business models being tried by entrepreneurial companies and an increasing availability of debt and equity, the report said.

Small energy grids (mini-, micro- and nano-grids) also showed significant expansion (40 percent during the same period), although growth is uneven and a lack of both financing and regulatory clarity still cast a shadow over the segment. The third distributed segment - solar home systems (SHS) and lanterns - showed similar growth rates (47 percent in terms of annual sales) and the advent of pay-as-you-go mechanisms, growth in financing options and penetration of retail banking are expected to support future growth in this market.

The boom in small and rooftop solar is mainly coming from commercial and industrial customers, which are attracted because power is generated at the point of consumption, circumventing complicated land leases, grid connections and transmission losses that often affect large projects. Commercial businesses had previously used diesel generators or other captive power sources to meet the shortfall in power, but the progressive decline in costs of solar PV has shifted the economics.

The fall in PV prices has also started to grab the attention of residential customers for rooftop solar, but that is still a “dormant” opportunity, BNEF said, mainly because developers face high transaction costs in receiving state subsidies. In addition, many states subsidize retail supply tariffs for residential consumers that reduce competitiveness of rooftop solar.

BNEF estimates that $610 million was invested in rooftop solar between FY2013 and FY2016. About 75 percent of that was accounted for by captive commercial and industrial projects owned by the end-user. But financing for third-party investors and renewable energy service companies is largely absent, which is a concern since this portion of the market is often dominant in other markets. This is a “big drawback” for a sector that needs almost $50 billion of capital to meet government goals. BNEF called for streamlining loan processes, strengthening product quality control and embracing smart grids, while also create wholesaling mechanisms to reduce transaction costs.

Small energy grids are now serving over 75,000 households. BNEF indicated that almost 2.9MW of these had been installed by the end of FY2016, with solar now dominant over the previous favorite, biomass. Installations in FY2016 were almost 300 percent higher than in FY2013 (after a relatively poor FY2015), and the average size of these grids is rising as well.

But the 11 leading mini-grid companies, which built 1.4MW of renewable mini-grids in 2016, up from 400kW a year prior, raised a mere $16 million equity and $6.26 million of debt finance from the beginning of FY2013 to the end of FY2016. The limited access to capital is significantly constraining the sector’s ability to grow. The long tenures required for mini-grid financing, bundled with the risk of seeing assets stranded by grid extensions, remains among one of the largest hurdles.

To further enhance the opportunity for small energy grid, BNEF suggested that the state distribution companies (“discoms”) work together with mini-grid providers to electrify remote areas. Power distribution companies can allocate certain rural areas that could be electrified by mini-grid companies under a franchisee model. The operators would need to follow certain standards to meet the discom’s technical and service parameters in exchange for permission to manage the local operations (generation and distribution) in that area under the patronage of the discoms.

At least 5.5 million lanterns and solar home systems had been sold in India by the end of FY2016 (excluding unbranded products). Companies surveyed by BNEF collectively raised $65 million in the last four financial years. As the market grows, new models like pay-as-you-go are gaining ground. Reserve Bank of India has given payment bank licences to 11 companies to increase banking penetration in rural areas. Besides this, a unified payment interface has been launched that will allow money transfer from a bank account to different merchants, both online and offline, without the hassle of typing credit card details, IFSC code or net banking passwords.

For solar home systems and certainly for mini-grids, the largely self-financed success seen in the rooftop solar segment will not be replicated because they mainly cater for poor, cash-constrained consumers. Financing, and in particular debt for consumer or mini-grid loans, is therefore a crucial challenge to scaling the off-grid business models.

Financing is the key

According to the BNEF report, to achieve scale and provide the 46 million households currently living without reliable power supply in India, commercial finance will have to be tapped. Among the most important remaining challenges to do so are:

India’s total electricity consumption is projected to increase fourfold by 2040, while per-capita power consumption is expected to increase 3.2 times over the same period. Around a quarter of India’s population is not connected to the grid and those that are connected generally do not have round-the-clock power. To address this, the government has set an ambitious goal of providing 24x7 'Power for All' by 2019. 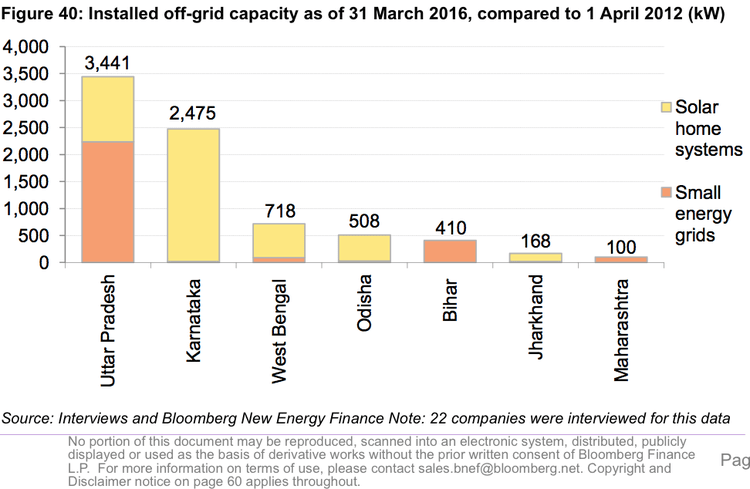 BNEF estimates that there are at least 62 million households in India without access to the power grid, with 50 percent of them in Uttar Pradesh and Bihar. Some 11 million households live in villages or hamlets that are officially connected to the power grid, but often remain under-serviced. This may be due to frequent outages or to the definition of village electrification used by the government – which often neglects the expansion of last-mile distribution network to all residential houses. There are currently 16 million other households that have been identified for connection under the government’s electrification scheme.