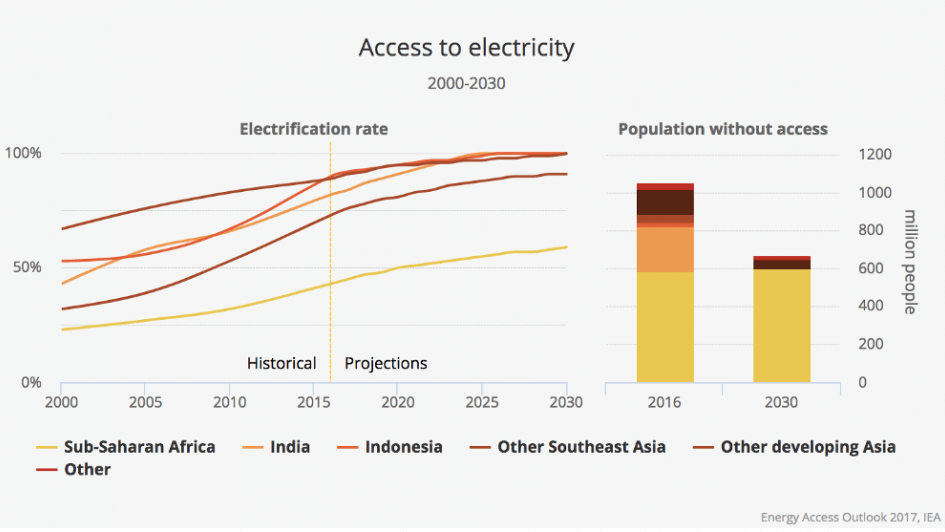 India stands out as “one of the largest electrification success stories in history”, accounting for 2 or every 5 people newly electrified since 2000, according to a new report by the International Energy Agency.

However, the report painted a picture of the future quite different from the centralized grid focus of the current Indian government, saying that decentralized systems, led by solar PV in off-grid and mini-grid systems, “will be the least-cost solution for three-quarters of the additional connections needed” to achieve Sustainable Development Goal 7 (SDG7) before 2030.

“Over the period to 2030, new connections to the grid bring electricity to over half of those that gain access, and offer the most cost-effective means of access in urban areas, but decentralised systems are the most cost-effective solutions for over 70% of those who gain access in rural areas. By 2030, renewable energy sources power over 60% of new access, and off-grid and mini-grid systems provide the means for almost half of new access, underpinned by new business models using digital and mobile technologies,” the report said.

Without doubt, India has made enormous strides. The report said India has reached 82% of the population, up from 43% in 2000, while the pace of has quickened as well, with the number of people gaining access rising from 28 million per year between 2000 and 2012 to 41 million people per year in 2016. “If this pace is maintained, India will achieve universal access in the early 2020s,” the report said, “with renewables accounting for about 60% of those who gain access”.

Over 99% of people who have gained access in India since 2000 have done so as a result of grid extension, it added. Coal fuelled about 75% of the new electricity access since 2000, with renewable sources accounting for around 20%.

Globally, the number of people without access to electricity fell to below 1.1 billion people for the first time in 2016, with nearly 1.2 billion people having gained access since 2000, 500 million of which were in India, the report said.

For further details on the report, see the Power for All article here.