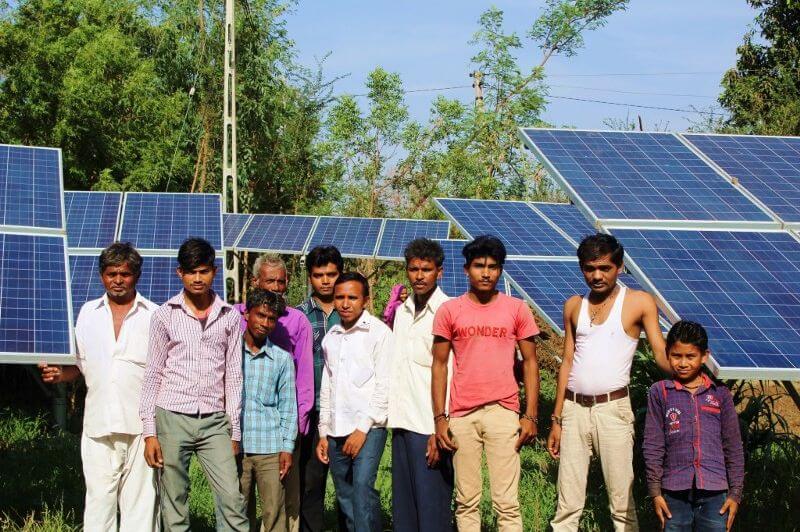 Members of the SPICE project in Gujarat state
Photo: IWMI

How distributed solar can save India $10 billion, eliminate 5% of emissions, increase farmer incomes

An innovative project in India to aggregate power generated from microgrid-powered solar irrigation into farmer-owned electricity cooperatives is showing impressive results, with the potential to save India’s government $10 billion in farm power subsidies, conserve scarce groundwater and eliminate 5% of India’s total GHG emissions.

The Solar Pump Irrigators Cooperative Enterprise (SPICE), located in the countryside outside Ahmedabad, capital of Gujarat state, uses solar power not only to run its six irrigation pumps, but pools the surplus energy to sell to the local utility — Madhya Gujarat Vidyut Company (MGVCL) under a 25-year power purchase agreement (PPA). The PPA, combined with a green energy and water conversation bonus, means a 7.13 rupee pay-out per kWh. Between May 2016 and end April of this year, SPICE had earned more than 340,000 rupee (USD $5,300) from electricity sales.

Based on an aggregate generation capacity of nearly 85,000 kWh annually for the cooperative, 53% of that is potential surplus that can be sold into the grid, worth 300,000 rupee.

Solar power comes much cheaper than diesel and is more reliable than subsidized grid power, in that it is uninterrupted, predictable and available during daytime and free of cost. Moreover, income from power sales makes the farmers less vulnerable to drought, floods, pests and diseases by providing guaranteed income.

Land use, which is a concern in densely populated India, turned out to be a non-issue, with farmers experimenting with a range of high-value crops like spinach, carrots, garlic, beet and some medicinal plants that grow well under the panels’ shade.

SPICE also frees MGVCL and the state government from farm power subsidies, and provides additional savings from the avoided cost of transmission poles and cables and the depreciation of that investment. MGVCL actually earns money as well from the sale of renewable energy certificates (RECs), which accrue to the utility as part of the PPA. All in, this adds up to 820,000 rupee (USD $12,800) in incremental annual revenue for 25 years for MGVCL.

The initial six SPICE members contributed 5000 rupee/kWp, roughly 8% of the cost of the irrigation system. The remainder and the cost of the micro-grid was subsidized through a “Climate Smart Agriculture” grant from the CGIAR program on Climate Change, Agriculture and Food Security (CCAFS) to the International Water Management Institute (IWMI). Encouraged by the initial success, in recent months three new farmers have contributed 25,000 rupee /kWp (40% of the capital cost) to join the cooperative.

“Business model innovations like SPICE that use distributed renewable energy to deliver economic impact and improve rural livelihoods are just getting started,” Shilp Verma, a researcher with IWMI-Tata Water Policy Program, told Power for All. “The potential of micro-grids is huge for India.”

Utilities and DISCOMS, which are debt-ridden and inclined to avoid dispersed rural projects that have a high transaction cost, can reduce net-metering friction by metering the cooperative at a single point, leaving it up the cooperative to meter each solar pump and pay each member based on the power evacuated by him/her.

India currently has over 15 million grid-connected irrigation pumps accounting for an estimated 700 billion rupee (USD $10 billion) of power subsidies. The SPICE model can eliminate that heavy cost, as well as incentivize well owners to become efficient energy and groundwater users. Current subsidies disincentivize farmers from conserving both power and water. By weaning farmers off grid power, they not only make money through conservation, but metering will make it possible to measure water withdrawals as well.

Using grid-tied electricity and diesel for groundwater irrigation produces an estimated 26 million tonnes of carbon emissions, which is about 5% of India’s total. Solarizing India’s groundwater economy would eliminate this huge carbon-footprint.

But the ultimate benefit is to the small farmer. A 7.5 kWp solar pump, with an assured power buy-back contract at 7.0 rupee per kWh, can help a one-hectare farmer meet irrigation needs and generate extra net income of up to 60,000 rupee per year, equivalent to what three buffaloes can now give.