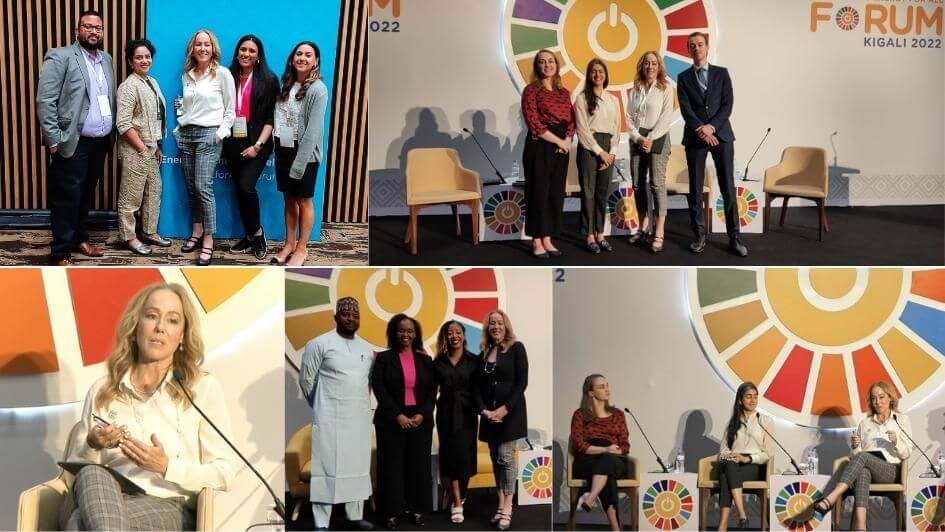 Highlights from the recently concluded SEforALL Forum in Kigali, Rwanda

The curtains may have fallen on this year’s Sustainable Energy for All Forum, which brought together over 1,000 participants from the energy sector, but it has made significant progress in advancing a clean and inclusive energy transition around the world, including a commitment of USD 347 million to support energy access and transition.

The SEforALL Forum was held from  16th -19th May, 2022, in collaboration with the Government of Rwanda, and themes revolved around addressing Sustainable Development Goal 7 - Affordable and Clean Energy for All gaps and energy transition in Africa.

His Excellency Hon.  Paul Kagame, President of Rwanda in his opening remarks, stressed the need to expand the use of off-grid technologies and stand-alone systems to rural communities in Africa, where over half a million people still lack electricity.  His remarks bolstered Africa’s commitment to be part of the solution to address energy access challenges through renewable energy.

New commitments and initiatives worth over USD 347 million to support energy access and transition were announced at  the Forum. These included:

Some of the key new initiatives and partnerships launched at the forum included:

Power for All co-chaired two sessions at the forum. The first was a panel discussion on ‘Transitioning to the grid of the future’ with CrossBoundary and Rocky Mountain Institute (RMI), which highlighted the importance of collaboration between utilities like Umeme, Kenya Power and Lighting Company, and mini-grid operators to accelerate energy access and as well as to stimulate demand from first-time end users.

Florence Nsubuga, Chief Operating Officer, Umeme;  Suleiman Babamanu, Nigeria Program Director, RMI Africa, and Tombo Banda, Associate Principal, CrossBoundary were part of the panel facilitated by Kristina Skierka, CEO, Power for All.  Florence shared the experiences of the  Power for All led Utilities 2.0, an integrated energy project in which Umeme is partnering with several mini-grid companies to provide electricity cheaper and faster to a peri-urban community in Uganda.

“Under U2.0, as we connect more and more low-end customers, our partners are providing appliance financing to increase demand so the cost of serving them is absorbed in the tariff. The future is already here," she said.

The second event on ‘Powering Jobs: Building a workforce to meet the SDG 7 challenge,’ was co-hosted with Alliance for Rural Electrification (ARE).  Jens Jaeger, Director of Policy and Business Development, ARE, facilitated the Panel comprising Kristina Skierka, CEO, Power for All, Grace Perkins, Program Director, Clean Energy, Shortlist Professionals, and Radhika Thakkar, Vice President, Corporate Affairs, Sun King. The session stressed the growing potential of jobs in the decentralized energy sector and the crucial role of TVET and training skills to empower youth and women in the sector.

Kristina Skierka’s interview with CNBC Africa highlighted the disparity of gender in the workforce in the fossil fuel industry and how the renewable energy industry is bridging the gap. The interview also stressed the importance of accelerating energy access as a means to end energy poverty in Subsaharan Africa

Takeaways from the Youth-led SDG7 Sessions

The highly energized youth SDG 7 Summit was held over the three days at the forum with discussions covering innovations, jobs, career advisory, and advocacy towards universal energy access. Speaking at the summit, Hon H. E. Volkan Bozkir, President of the 75th UN General Assembly stressed the importance of accelerating universal energy access and the need for intergenerational partnerships and coalitions of action to turn the vision of universal energy access into reality by the end of this decade.

Session on the Green Economy

Powering 24 million jobs led by the BRICS Youth Energy Agency stressed the need for increased awareness on job pathways in the clean energy space and the role of   jobs and entrepreneurship in the energy transition is a crucial space for youth and women to participate and take lead.

Damilola Ogunbiyi, CEO SEforALL, closed the 2022 forum on a high note stating, “ You can’t transition from something you don’t have”  highlighting that energy access is still a widespread issue on the continent.