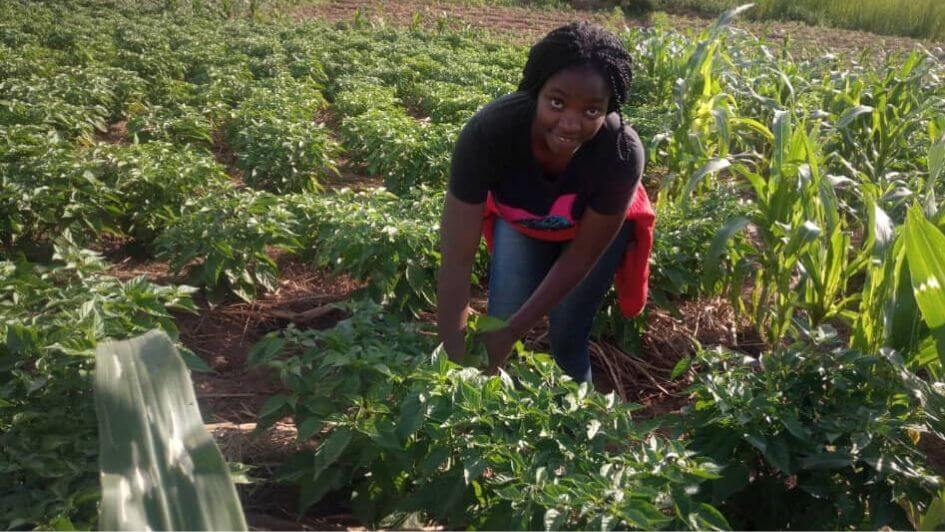 In the drought-prone district of Bugesera, south-east of Rwandas’s capital city Kigali, 24 year old Peruth Tuyishime is one of six farming group members working on a one hectare farm.

The farm grows a range of crops, from chili and maize, to cucumbers, sweet peppers and pumpkins. But erratic rain patterns, characterised by increasingly longer periods of droughts, are having a disastrous effect on food production and on the livelihoods of those dependent on agriculture.

Agriculture accounts for 33% of Rwanda’s GDP, with women smallholder farmers contributing up to 79% of the country’s agricultural labour.

For farmers like Peruth, an unpredictable, changing climate means not only fewer crops to harvest, it also means having to find more money to pay for food. “When rains fail it affects our work and feeding the family becomes difficult,” she says.

Yet, the district of Bugesera boasts many natural water resources that could be efficiently utilised for irrigation to cushion farmers from droughts.

Irrigation has a huge potential to mitigate the impact of climate change on agriculture and increase farms’ productivity. It is estimated that the crop yields on properly-irrigated land can be more than double those on rain-fed and hand-irrigated land.

However, “not everyone can afford to irrigate and those small-scale farmers who do irrigate, mainly depend on diesel to power their pumps, which makes them costly to operate,” explains Eric Ruzigamanzi, Agriculture Project Technical Manager, Energy 4 Impact.

While solar-powered irrigation technologies are a cost-effective alternative to diesel pumps, as they remove the need for diesel and result in significant long-term savings, they require a higher initial investment, which puts them beyond the reach of many farmers.

Access to finance, especially for small-scale farmers, as well as the accessibility of good quality products and services remains an issue in Rwanda.

In 2018, Peruth Tuyishime was invited to visit a demonstration farm, set up by Energy 4 Impact to showcase a range of solar irrigation equipment, suitable for the needs of smallholder farmers. This initiative is part of a programme funded by the Opec Fund for International Development (OFID) to develop the small-scale solar irrigation market in the country, as a way of increasing farmers’ productivity and the country’s food security.

“We have very ambitious targets for increasing the amount of irrigated land through the introduction of solar technologies. To this end we have been working with financial institutions and equipment suppliers to enable small-scale farmers to source and afford good quality solar irrigation systems”, says Eric.

Under this scheme, Peruth and her group of farmers were required to raise 30% of the cost the system, comprising an ENNOS Sunlight pump, solar PV panels and a 50m hosepipe; the remaining 70% is subsidised by the Rwanda Agriculture Board and Energy 4 Impact through OFID.

Through this mix of loans and subsidies Peruth’s group, along with 19 other farmers’ organisations – made up of 281 smallholder farmers – were able to acquire solar irrigation systems from accredited suppliers.

Within a season, most of them have seen their yields increase by up to 67% over the previous season.

“Solar irrigation can have a long-lasting benefit on productivity, enabling farmers to increase the number of planting seasons, diversify their crops and enhance communities’ resilience to climate shocks,” explains Eric.   “As well as training farmers at these demonstration farms in the use of solar pumps, we are helping them with practical know-how on agricultural practices, pest control and potential new crops.”

Thanks to the new solar system and agronomic advice, Peruth and her group of farmers were able to save around $250 in fuel and manual labour in just one season and expand the irrigated area by 2 hectares.

They are confident that their production will be excellent this season as they are expecting to produce between 6 tonnes of dry Chili and 2 tonnes of cucumber. With the current market price, the profit is likely to be $3,135 and $1,100 for chili and cucumber respectively.