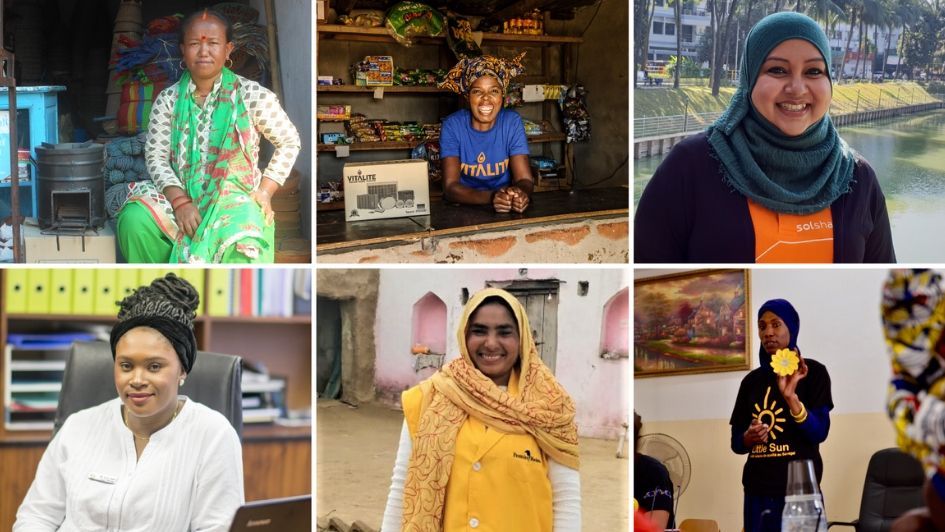 A quarter-century ago, the watershed 4th World Conference on Women was held in Beijing, adopting an ambitious action agenda to achieve total gender equality. When it comes to energy poverty, 25 years later, it must be asked if we have succeeded in empowering women? One indicator: just 25% of formal jobs in the decentralized renewable energy (DRE) sector are held by women. That is just barely higher than traditional energy (22%), and much lower than the overall renewable energy sector (32%).

According to ENERGIA, universal energy access targets are unlikely to be met unless energy policies are aligned to women’s as well as men’s energy needs, their assets, skills, limitations and capabilities, and existing gender norms. In the absence of appropriately targeted training, education, apprenticeships, employment placement, financial tools, and supportive social policies, transitioning to clean energy may exacerbate existing gender inequalities.

In the latest Power for All podcast, Sheila Oparaocha, international coordinator and programme manager at ENERGIA Hivos, highlighted the importance of gender equality as a standard practice in energy policies by noting that, “if you have a policy that doesn’t include gender, then it’s not going to deliver on government responsibilities to advance the rights and the needs of girls and women.” And she cautioned that even when policies are put in place, “evaporation” (a gradual loosening of enforcement) is often seen.

To advance women’s full, equal and meaningful participation and promote gender-responsive climate policy, a gender action plan (GAP) is a key tool to track and monitor gender mainstreaming. A  number of positive developments at the regional and national level have recognized the centrality of gender considerations in energy-sector interventions and development. The ECOWAS Policy for Gender Mainstreaming in Energy Access, adopted in June 2017, is one such instance, where 15 countries have committed to addressing existing gender barriers in expanding energy access in West Africa.

Kenya’s Ministry of Energy recently launched its Gender Policy, the first such legislative instrument on the African continent. It seeks to raise the level of gender awareness, change attitudes and inculcate an engendered work culture among staff in the energy sector and sets an important milestone in the process towards ensuring affordable, reliable, sustainable and modern energy for all by 2030.

Phoebe Makungu, the ministry’s assistant director of gender and development said the policy “aims to ensure women do not just participate as beneficiaries but play an active role as entrepreneurs in the entire energy value chain.”

In that vein, government action is just the beginning. The private sector and civil society are key to turning policy into action. The diffusion and increased uptake of renewable technologies, coupled with the spread of energy-efficient household practices like the use of improved cookstoves, benefits women on many levels. Besides reducing drudgery in energy collection, it enables job opportunities that allow women to work as energy managers in their communities. For example, since its launch in 2010, Solar Sister has reached over 1.6 million inhabitants across Tanzania, Uganda, and Nigeria with solar lights and clean cookstoves. Additionally, they have empowered over 4,000 Africans to become entrepreneurs, of which 81% are women.

On the sidelines of this year’s Global Off-Grid Solar Forum and Expo in Nairobi, Azuri Technologies, a pioneer in pay-as-you-go solar home solutions for off-grid Africa, announced its Brighter Lives Initiative, aimed at bringing more rural women into the off-grid solar sector.

The initiative will provide employment and training to 250 new female recruits. Women currently make up 35% of Azuri’s rural workforce in Kenya. Azuri CEO, Simon Bransfield-Garth said the company is committed to increasing female representation, with the objective that 50% of all new hires in 2020 will be women.

"At Azuri, we are committed to equality, fairness, and respect and we recognize the solar energy sector offers women a source of well-paid employment with strong opportunities for career advancement," Bransfield-Garth said.

"We understand that empowering women brings huge benefits to our business and on the social front is critical to eradicating poverty and accelerating economic development."

Azuri’s Brighter Lives initiative includes tailored recruitment specifically targeting rural women who are largely under-represented in the workplace. The company will deliver an enriched training curriculum across its regional training centers, which offer a flexible working environment with additional guidance given on balancing work with family duties and unlocking financial services previously unavailable to them.

IRENA noted in its Gender and Renewable Energy statement in 2019 that women’s equal participation in all aspects of the on-going energy transition is a question of fundamental fairness. Women’s perspectives, expertise, and leadership are critical to ensuring informed and inclusive decision-making and a larger pool of talent in the renewable energy sector.

While there is considerable momentum on the gender and energy nexus, it is also good to note that the lack of high-quality data and, more precisely, lack of sex-disaggregated data and gender statistics, still remains a major impediment to projects in the gender and energy nexus. For women to be actively involved in decision-making, data collection on women’s and men’s resource use, knowledge of, access to and control over resources and economic opportunities must be improved.

As we celebrate this year’s International Women’s Day on March 8, we must acknowledge that investing in women in the energy sector is not just an altruistic pursuit; it can also boost economic growth, bolster well-being to our societies, and create compelling opportunities for a sustainable energy future.

See Also
How we count energy poverty is broken, requires new framework Is the G20 serious this time about energy access and SDG7? Repurposing the COVID-19 Response for SDG 7 How community-based education campaigns can increase electricity connections and improve project economics Powering Health across Africa through COVID-19 and a Changing Climate